The fifth anniversary of the international war against so-called Islamic State has seen the total defeat of the terrorist group as a territorial entity in both Iraq and Syria. Now degraded to insurgency, the US and its allies try to contain the jihadist organisation. However, after five years of fighting the cost to civilians on the ground has been high.

In total, since the US-led Coalition conducted its first airstrike on August 8th 2014, there have been 34,402 air and artillery strikes in Iraq and Syria, by Airwars’ count. In a conflict that has now lasted longer than the First World War, 117,677 munitions have been dropped on ISIS from air – almost seven times more than in Afghanistan during the same period.

The present best estimate by Airwars is that between 8,106 and 12,980 civilians have likely been killed in Coalition actions in four years of fighting – with the alliance itself presently conceding only 1,321 non-combatants deaths from its air and artillery strikes.

On March 23rd, the Syrian Democratic Forces (SDF) forces declared victory over the caliphate established by the so-called Islamic State. While around 40,000 fighters from 80 countries had travelled to Iraq and Syria to join the caliphate, the US estimates that between 70,000 and 100,000 ISIS fighters have been killed – many in airstrikes – since Coalition actions began in August 2014.

Despite declarations of victory, strikes against ISIS remnants have continued into 2019 – though at a very low rate – amid fears of the group rising again. Territory formerly seized by ISIS is now controlled by the Syrian Democratic Forces – who are in constant struggle with Turkey. This is due to Turkey’s contention that the SDF is controlled by the YPG/PKK, which Ankara deems a terror organisation. In addition, the SDF is backed by the US – normally a NATO ally to Turkey. The YPG has also called upon the Assad regime, currently bombarding Idlib, for help in the past.

US-President Donald Trump has said that he wants US troops out of Syria as quickly as possible, asking France, the UK and Germany to share more responsibility in Syria. However, uncertainty about what would happen to the US’ Kurdish allies, crucial in defeating and containing ISIS, has kept the US in Syria so far.

The final US-led assault on Baghouz, which led to the fall of the so-called Islamic State as a territorial entity, took a heavy toll on civilian life. Some 98% of the minimum 416 civilians assessed by Airwars as likely killed by the Coalition in the first six months of 2019 perished between January 1st and the final announcement of the liberation of Baghouz from ISIS on March 23rd.

Civilians in the so-called MERV (Middle Euphrates Valley) were particularly at risk due to the high intensity of the bombing campaign. An Airwars analysis indicates a sometimes higher tempo of Coalition actions in Syria in the first two months of 2019 than were recorded at Mosul during March 2017, the most intense and lethal period of the battle for Iraq’s second city.

Following the liberation of Baghouz from ISIS, strikes in Syria all but ceased, and the Coalition has reported only one strike in Syria since May 4th. However, Airwars has continued to track civilian harm from counter-terrorism operations in the country. The Coalition carries out these sorties to support the SDF in their attempts to clear remaining hideouts of ISIS fighters, who often hide in the desert at the Syrian-Iraqi border.

The last civilian harm incident Airwars researchers tracked in Iraq was on March 24th, however, Coalition strikes have continued there, with 231 strikes publicly reported within the first six months of 2019 – a 76% rise on the number conducted in the first half of 2018. Alarmingly, the Coalition slashed transparency for its actions in December 2018, meaning that it’s now impossible to assess where or on which specific dates these strikes occurred – and for Airwars to cross-match any potential civilian harm events.

The Coalition has so far acknowledged killing 1,321 civilians in its strikes across Iraq and Syria, in what it has repeatedly called “the most precise war in history”. There is a huge disparity between the death toll given by the Coalition and Airwars. Our own estimate is that between 8,106 and 12,980 civilians have likely died in strikes by the alliance since August 8th 2014. In total, we our research team has tracked almost 2,900 civilian casualty events allegedly linked to Coalition forces, with as many as 29,400 civilians locally alleged killed in Iraq and Syria. 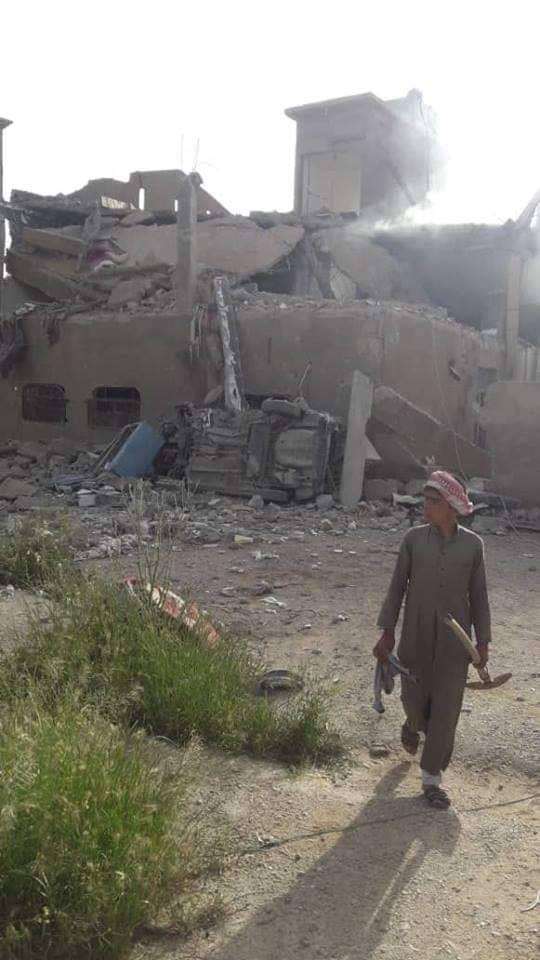 The war has taken an increasingly deadly toll on ordinary Iraqis and Syrians on the ground as it’s progressed. Likely deaths jumped by 82% in 2016 on the following year when we saw the fighting shift to more densely populated areas. The impact on civilians trapped on the ground was dire. Of the 8,106 civilians estimated killed since 2014, almost 50% of these deaths occurred during 2017, a year marked by the increasingly ferocious battles for Mosul and Raqqa.

Overall, likely deaths fell by 80% in 2018 on the previous year, but by November 2018, with the push to eradicate ISIS from the slithers of territory it clung on to in eastern Syria, civilian harm began to spiral. This suggested that the US-led Coalition had applied few of the lessons learned during the brutal urban assaults on Mosul and Raqqa, when it came to the protection of civilians.

Stories of affected communities must be heard

As the war against ISIS moves into its sixth year, the true impact of the fighting is yet to be revealed, and there are thousands of stories needing to be heard. A major investigation by Airwars and Amnesty International has concluded that 1,600 civilians were killed by the Coalition during the Battle of Raqqa alone – ten times higher than the Coalition admits.

Five years of war against ISIS have had a devastating impact on Iraq and Syria. While rebuilding measures in some areas have been quick, only 6,000 out 24,000 properties destroyed in Nineveh, Iraq have been rebuilt, according to Sky News. As well as continuing to track all claims of civilian harm from alleged Coalition actions in Iraq and Syria – and in other conflicts – Airwars is now focusing on reconciliation and restitution for civilians affected by the military actions of the US and its allies.

While the so-called Islamic State has been defeated as a territorial power, the fight continues on different levels as calls for reconciliation and restitution become more pressing. Justice for civilians affected by the war can play a key role in rebuilding broken societies to establish peace in the crisis-torn region and stop ISIS from rising again.

What a difference rehabilitation can make! This school in west #Mosul has re-opened with support from UNDP & @DFID_UK, allowing almost 700 kids return to school?#IraqStabilization pic.twitter.com/EtRCcMhA5H