Israeli strikes on Gaza in May killed up to ten times as many civilians as lengthy Syria campaign, Airwars finds

In just eleven days in May 2021, Israeli air and artillery strikes on Gaza killed up to 10 times more civilians than the country’s eight-year bombing campaign against Iranian-linked forces in Syria, new Airwars research has found. The study raises critical concerns about the use of explosive weapons in populated areas.

The report – ‘Why did they bomb us?’ Urban civilian harm in Gaza, Syria and Israel from explosive weapons use’ – comprehensively documents the civilian toll of recent Israeli actions in Gaza and Syria, as well as from Palestinian rocket fire into Israel during May. Published jointly in Arabic, Hebrew and English, the 16,000 word report employs Airwars’ standard methodology to examine how, when, and where civilians are killed in urban conflicts.

Among the report’s key findings are:

Israel’s longtime rival Iran has been active within near neighbour Syria since civil war erupted a decade ago, with Tehran helping to prop up President Bashar al-Assad’s regime. Beginning in January 2013, Israel has periodically carried out attacks within Syria to counter Iranian entrenchment. Strikes have targeted Iranian and Syrian troops, as well as militias from multiple countries aligned with Tehran.

Airwars has tracked Israeli strikes in Syria for several years as part of its long running monitoring of actions there by all foreign actors. It has now published interactive mapping of all locally reported allegations against Israel in Syria. It’s believed to be the first comprehensive assessment of the civilian toll of an extensive but secretive air campaign.

Airwars researchers also recorded civilian harm from Israeli military strikes during the May 2021 eruption of violence in Gaza, alongside harm caused by rockets fired into Israel by Palestinian militants.

An image from Airwars’ interactive map of civilian harm in Gaza

Since 2008 Israel and Palestinian militants in the Gaza Strip have fought four major combat operations. Airwars researchers looked at the latest conflict in May 2021 in order to provide comparative data with the more limited civilian harm events being reported from Israeli strikes in Syria.

After compiling all community-reported civilian harm events in the conflicts in Syria and Gaza, Airwars researchers found that one of the critical explainers behind the dramatically different outcomes for civilians was where the IDF chooses to bomb.

According to local reports, the great majority of Israeli actions in Syria have targeted military assets such as air bases, troop convoys and weapons stores, away from major cities and towns. Hundreds of militants were killed in these operations, for the most part in military settings.

In Gaza, the picture was very different. Strikes routinely hit residential neighbourhoods, and militants were frequently targeted in non-military settings: Airwars identified 17 locally reported incidents in which militants were targeted in residential buildings and in which civilians were killed or injured nearby. In those incidents, local reports found that between 27 and 33 civilians were killed, with more than 100 injured. One third of those killed in the Gaza Strip were children.

Airwars also identified between 56 and 68 civilians killed when the IDF targeted what they said was a Hamas militant tunnel network beneath heavily populated areas in Gaza City, leading the buildings above to collapse. Most of the deaths came from a single incident: in the early morning of May 16th, at least 41 civilians were killed in strikes on the residential al-Wahda street, of which up to 18 were children.

Riyad Ishkontana, 42, lost his wife and four of his children in the al-Wahda street attack. He had spent the days leading up to the bombing reassuring the young family they were safe: their building was in an area of professionals and shops, he told them. But in the early hours of the morning, as Ishkontana was out getting snacks, the building was hit. Only one of his children survived. “I wish I never left,” he told The New York Times.

Airwars also mapped all civilian harm allegations in Gaza, Syria and Israel against population density, and found a second clear driver of civilian harm: the more heavily populated an area, the more civilians were killed.

In Gaza, one of the most heavily populated places in the world, more than 1,500 declared Israeli air and artillery strikes hit the territory in just 11 days. This dramatically increased the likelihood of civilian harm. Even within Gaza, there was a clear trend – the more heavily populated a neighbourhood, the more civilians died there.

The trend was also noticeable in Syria. While the scale of civilian harm from IDF strikes was much lower than in Gaza, it is still overwhelmingly located in heavily populated areas. Around 45 percent of estimated civilian casualties from Israeli strikes since 2013 occurred in the capital Damascus. In Israel, 17 of the 33 reported civilian harm incidents resulting from Palestinian rockets also took place in more densely populated areas, Airwars found.

Population density in Gaza may have given some a false sense of security. On May 12th in Gaza, airstrikes killed Reema Saad, who was four months pregnant, alongside her two children and husband. The family had decided to stay in their apartment because they believed the densely populated neighbourhood would be immune from targeting, Reema’s mother Samia told Middle East Eye. 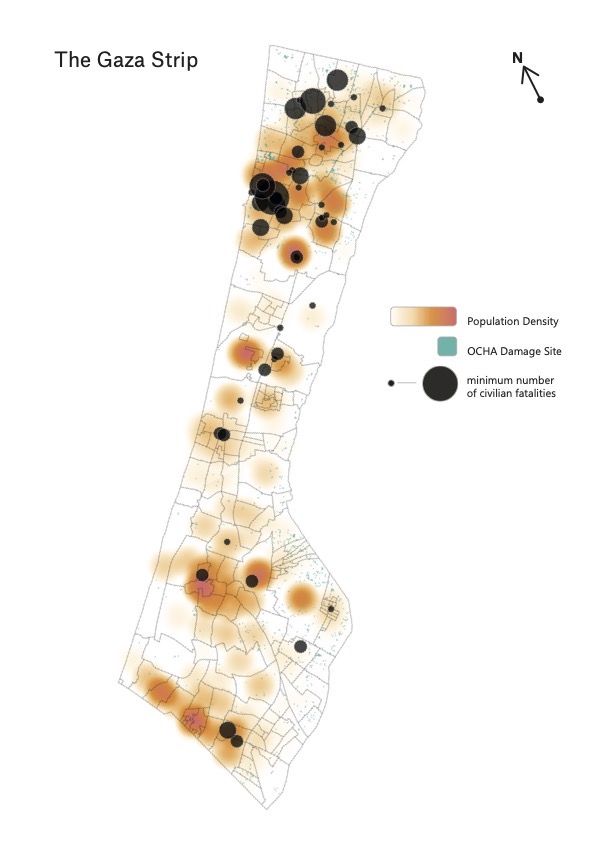 Airwars mapping of population density and reported civilian harm for Gaza, May 2021

The new findings support what Airwars has found across all conflicts it monitors: that using wide area effect explosive weapons in populated urban areas leads to high levels of civilian deaths and injuries.

This phenomenon is certainly not restricted to actions by the IDF, or by Palestinian militant groups. Indeed, the Gaza campaign in particular can be seen as part of a profoundly worrying trend in which nations and others conduct intensive military actions in urban areas, often with devastating results.

High civilian casualties in Gaza are symptomatic of an escalating and troubling global military trend in the use of wide area effect weapons in populated areas (sometimes known as EWIPA) – seen from Gaza to Mosul, Aleppo to Raqqa, and Tripoli to Kabul. These latest findings lend further urgency to an ongoing international push to restrict their use in a United Nations-brokered Political Declaration by nations, expected to be finalised in early 2022.

“Our latest study corroborates what we have found with other large scale conflicts in Iraq, Syria and elsewhere: even technologically advanced militaries kill large numbers of civilians when attacks focus on urban centres,” Chris Woods, director at Airwars, said. “Despite repeated assurances to the contrary, it’s clear that ‘precision warfare’ cannot sufficiently mitigate civilian harm.”

“Stark differences in civilian deaths and injuries from Israeli actions in Syria and in the Gaza Strip clearly illustrate that the most significant driver of civilian harm remains the use of explosive weapons in populated areas. The single most effective way to reduce the number of civilians dying in warfare would be to restrict the use of such dangerous wide area effect weapons on urban centres.”

How the new research was carried out

The Airwars report is the result of months of meticulous research carried out by a team of local language researchers, geolocators and specialist assessors.

Thousands of local media, social media and official sources documenting civilian harm as it happened were identified and archived by Airwars’ team of Arabic-, Hebrew- and English-language researchers in relation to the May 2021 conflict in Gaza and Israel. Researchers also continue to monitor and archive all civilian harm allegations in Syria resulting from Israeli strikes since 2013.

Airwars has then assessed the civilian harm from each incident in Gaza, Syria and Israel using the same standard methodology it applies across all conflicts it monitors. Its approach can best be described as remote, original language hyperlocal monitoring of casualty claims by affected communities – along with a review of broader reports and claims by belligerents, media and other investigators. All assessments are viewed as provisional – that is, any credible new information relating to an event will be subsequently added, potentially affecting our understanding of the incident.

The full report available in English, Hebrew and Arabic