State delegates from around the world will meet this week in Geneva for UN-backed crunch talks, working towards a political declaration on restricting the use of wide area effect explosive weapons in urban conflict. If successful, the move could help save thousands of civilian lives.

Representatives from more than 60 countries will meet from April 6th-8th in the Swiss city of Geneva to try and hammer out the wording of a protocol, or political declaration, on restricting the use of wide area effect explosive weapons in populated areas (EWIPA).

As wars have increasingly moved from open battlefields to urban environments, weapons designed for the former are being deployed in heavily populated areas – sharply increasing the risks of harm to civilians and civilian infrastructure.

UN and civil society reports have repeatedly found that civilians and civilian infrastructure are at most risk when heavy explosive weapons are used in populated areas. This has been clearly demonstrated in recent weeks in Ukraine as Russian forces have pounded civilian neighbourhoods with devastating results, but has also been documented in other recent conflicts across the globe.

Research by Action On Armed Violence indicates for example that around 90 percent of those killed and injured by explosive weapons in populated areas are civilians.

“Ukraine puts a spotlight on the devastating consequences civilians face when towns and cities are bombed. But this is a pattern of harm that we see elsewhere too: Ethiopia, Gaza, Iraq, Yemen, and Syria are all recent examples,” said Laura Boillot, coordinator for the International Network on Explosive Weapons, which is leading civil society efforts to restrict EWIPA use. 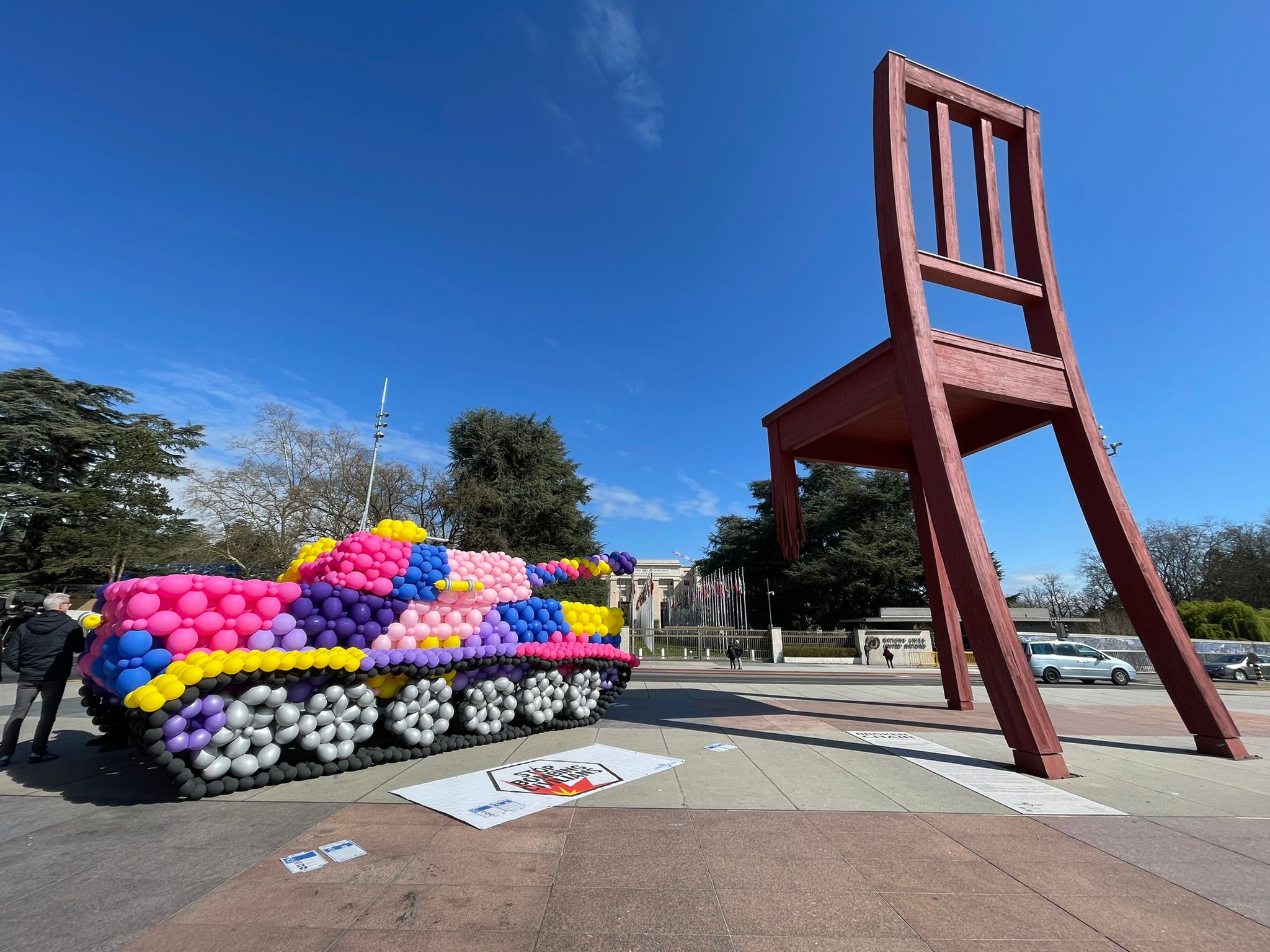 To highlight the EWIPA talks, the campaigning group Humanity & Inclusion has installed a tank made of balloons outside the United Nations in Geneva (Credit: Megan Karlshoej-Pedersen/Airwars)

“This week, states have an opportunity to reduce civilian harm and agree a new international declaration that commits states to avoid the use in populated areas of explosive weapons with wide area effects.”

In 2019, Ireland convened the first EWIPA negotiations, inviting delegates from every country to join and shape a resolution to change how explosive weapons are used in populated areas.

In the years since, delegates have continued to gather to discuss the text of the declaration – which will be finalised and ratified by states this summer.

While not a United Nations process, the EWIPA proceedings are backed heavily by the UN; and Secretary General Antonio Guterres has repeatedly called for countries to adopt a strong protocol.

When explosive weapons are used in populated areas, 90% of the casualties are civilians, causing devastating suffering.

US, UK, France in focus

During three days of talks in Geneva, representatives from attending countries will pore over the draft resolution and try to agree on key sections of text.

Much of the focus will likely be on winning the support of those states which have previously attempted to water down the declaration’s language, including the United States, the United Kingdom and France. While some states argue that abiding by international humanitarian law (IHL) is enough, others like Britain also claim that limiting explosive weapon use in cities “would reduce the UK’s ability to operate legitimately and responsibly.”

Critics say that adherence to IHL alone is not sufficient to protect civilians during attacks on cities – a point recently supported by a major Pentagon-published study into the ferocious 2017 Battle of Raqqa, which noted that the US-led Coalition caused “significant civilian harm despite a deeply ingrained commitment to the law of war.”

Efforts by the US, UK and others to water down the political declaration would make it effectively useless critics warn – and crucially, would not lead to changes in the way that states actually approach the use of explosive weapons in cities.

Given the horrors of urban civilian harm in Ukraine, a very disappointing answer from UK government on whether it will commit to restrictions on explosive weapons use in cities, at upcoming @UN talks in Geneva. (Thanks to @MargaretFerrier for question.) https://t.co/BHWDagQD1D pic.twitter.com/LmK7mgStKv

The draft resolution being discussed at Geneva consists of two parts – a preamble, which lays out the framework and overall considerations; and the operative section, which effectively compels states to act. For example, the value of tracking civilian casualties in real-time are currently mentioned in the preamble, but aren’t in the operative section – though some states are pushing for it to be moved there.

Broadly speaking, those attending the political declaration talks can be split into two camps: those states that argue the resolution should use weaker language; and those nations – backed by the UN – arguing that the declaration should be as strong as possible.

Other key states, including Russia and China, are not expected to attend this round of talks.

Among the strongest advocates for an effective political declaration is Ireland, which has led the process. UN Secretary-General Antonio Gutteres has also called for “strong” wording. “The Secretary-General supports the development of a political declaration, as well as appropriate limitations, common standards and operational policies in conformity with, and further to existing requirements under, international humanitarian law relating to the use of explosive weapons in populated areas,” he said in a recent statement.

Some countries, such as Belgium, have already passed their own parliamentary resolutions indicating that they will be signing the declaration, although it is still unclear how this would be implemented in practice.

While these negotiations were originally planned to be the final in a series of discussions, there may still be a further round ahead of final ratification in the summer. In the meantime, supporters of controls on explosive weapon use in cities believe that Russia’s extensive use of indiscriminate large weapons on Ukrainian cities – and the horrific civilian toll associated with such attacks – may help sway wavering countries.

Armed conflicts in urban areas are increasingly fought with weapons that are not designed or adapted to be used in populated areas.

As a result, the effects of these weapons go well beyond their targets and have devastating consequences for civilians. pic.twitter.com/UUS2YMWW0x