Alice Ross
Web link
This page is archived from original Bureau of Investigative Journalism reporting on US military actions in Yemen, Somalia, Pakistan and Afghanistan.

John Brennan, the incoming director of the Central Intelligence Agency, told US senators last night that the CIA does not carry out covert drone strikes ‘to punish terrorists for past transgressions’. He insisted instead that they are only used ‘as a last resort to save lives’.

In a lengthy confirmation hearing before the Senate Select Committee on Intelligence (SSCI), Brennan answered questions on topics ranging from torture and classified leaks to an abortive attempt in 1998 to kill Osama bin Laden.

Dianne Feinstein, chair of the SSCI, also used the nomination hearings to claim the tally of civilians killed by drones was typically in the ‘single digits’ for every year of the covert campaign. Brennan accused those of suggesting otherwise as spreading ‘falsehoods’.

Brennan is viewed as one of the chief architects of the rapid expansion of the drone programme under President Obama.

Focus on drones
The opening of the three-hour hearing was repeatedly interrupted by activists from peace group Code Pink, protesting against the administration’s use of unmanned strikes, before Feinstein ordered the chamber to be cleared.

As each senator had a chance to question Brennan, the focus returned frequently to the controversial covert drone campaign.

In her opening remarks, Democrat Feinstein called for ‘increased transparency around targeted killing’ but said few civilians were killed in strikes.

‘The figures we have obtained from the executive branch, which we have done our utmost to verify, confirm that the number of civilian casualties that have resulted from such strikes each year has typically been in the single digits,’ she said.

Feinstein’s claim only appears reconcilable with what is publicly known of drone strike casualties if all adult males are considered combatants. This is a definition used by the White House according to a report in the New York Times in May 2012, which revealed that under Obama the term militant was used for all adult males in a strike zone unless intelligence posthumously proved them innocent. 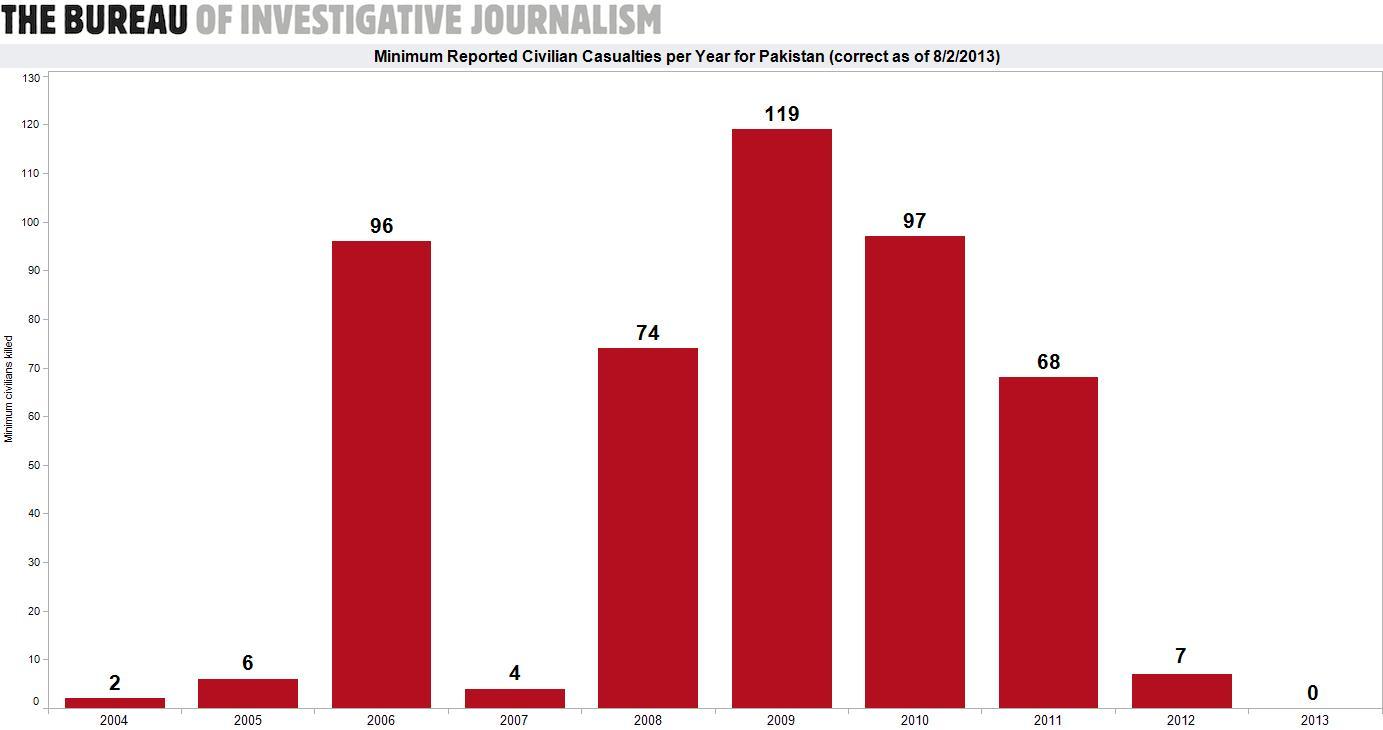 ‘Falsehoods’
Brennan used the hearing to mount a robust defence of drone usage, saying: ‘I think there is a misimpression on the part of some American people who believe that we take strikes to punish terrorists for past transgressions. Nothing could be further from the truth. We only take such actions as a last resort to save lives when there’s no other alternative to taking an action that’s going to mitigate that threat.’

He said opposition to the programme was based on ‘a misunderstanding of what we do as a government, and the care that we take and the agony that we go through to make sure that we do not have any collateral injuries or deaths’.

Activists were reacting to ‘a lot of falsehoods’ about civilian drone casualties, he added. ‘I do see it as part of my obligation… to make sure the truth is known to the American public and to the world.’

But critics rejected Feinstein’s claim of ‘single digit’ civilian casualties. Jennifer Gibson, who oversees the Pakistan drones project of legal charity Reprieve, said: ‘Last night, Brennan made repeated pledges to make the US drone programme more transparent. He can start by releasing the evidence upon which senator Feinstein repeatedly made claims of single-digit civilian deaths.

‘These are claims the administration has made before, claims which several independent sources, including two leading US universities, have found false.’

Reprieve supported the UK court case of Noor Khan, a Pakistani tribesman whose father was among an estimated 31-42 civilians killed in one strike alone, on Datta Khel, Pakistan on March 17, 2011.

Brennan acknowledged concerns expressed by independent senator Angus King about the lack of due process surrounding drone strikes that kill US citizens, but argued the US’s ‘judicial tradition’ was distinct from ‘decisions made on the battlefield’. He added that the decision to strike was not based on past guilt. Instead, he said, ‘we take action to prevent further action’.

‘The CIA should not be doing traditional military activities and operations’

The judicial basis for drone strikes was a major focus in advance of the hearing. On the morning of the hearing, senators on the committee – though not their staff – were permitted for the first time to see the full 50-page classified legal opinions justifying drone strikes that kill US citizens.

Previously senators had only seen a 16-page Justice Department white paper, despite being responsible for holding the CIA to account. The white paper was leaked by NBC News on Monday and drew criticism for what the memo itself referred to as a ‘broader concept’ of the type of imminent threat that could justify killing US citizens without judicial approval.

Obama’s decision to release the legal opinions followed a letter on Monday from 11 members of the US Senate, who demanded to see the documents with the barely veiled threat: ‘The executive branch’s co-operation on this matter will help avoid an unnecessary confrontation that could affect the Senate’s consideration of nominees for national security positions.’

But in the hearing senators were largely muted on the legal ramifications of the drone programme.

Chris Coles, of campaign group Drone Wars UK, said: ‘Once the Code Pink protesters were ejected, the lack of any serious challenge to the notion that drones were a precise tool, carefully and legally used, was shocking.

‘Here was an opportunity to hold the CIA to account for its flagrant violation of international law – including the killing of hundreds of Pakistani civilians – but time and again, Brennan, one of the chief architects of drone warfare was merely thanked for his “valuable service”.’

Brennan used the hearing to hint at a shift in the role of the CIA away from its increasingly paramilitary role. In response to concerns from Democratic senator Barbara Mikulski that the agency had seen ‘mission creep’ towards functions that more properly belonged to military special operations, Brennan appeared to agree: ‘There are things the agency has been involved in since 9/11 that in fact have been a bit of an aberration from the traditional role,’ he said, pledging to re-examine the role of the CIA if approved. ‘The CIA should not be doing traditional military activities and operations,’ he added.

Although the session saw some tough questioning, particularly around Brennan’s discussions of security matters with the press, it ended with endorsements of the prospective CIA director from Feinstein and others. The committee will make its formal decision after a closed hearing on February 12.

Support Naming the Dead, the Bureau’s major new investigation, by donating to the Freedom of the Press Foundation.