June 2012 update: US covert actions in Pakistan, Yemen and Somalia

The Bureau’s covert war investigation tracks drone strikes and other US military and paramilitary actions in Yemen, Somalia and Pakistan. Here we summarise our key work and findings for June 2012. We also compare the first six months of this year with 2011.

An analysis of our data over this period reveals:

The CIA initially maintained the intensity of its drone programme from May into June with three attacks in four days. This culminated in a strike on June 4 that killed al Qaeda’s number two, Abu Yahya al Libi.

A nine day pause followed al Libi’s death as Washington continued negotiating with Islamabad to reopen Nato supply routes. Closing Pakistan’s roads to Nato convoys reportedly costs the US $110m a month. Four people died when CIA drones returned on June 13. Two days earlier the US had announced it was withdrawing its negotiators after six weeks of failed talks.

On June 21 the UN special rapporteur for extrajudicial killings, Christof Heyns, told the UN’s Human Rights Council that using drones to deliberately target rescuers was ‘a war crime‘. This CIA tactic was first exposed by the Bureau and the Sunday Times in February. Rescuers may also have been targeted in a strike seven days before Heyns made his remarks in Geneva.

Six monthly trends
From January to June some 3-24 civilians were reported killed by CIA drones in Pakistan. Reported civilian casualty rates have not been so low since the first half of 2008, when 12-21 civilians reportedly died during George W Bush’s presidency.

In comparison, from January to June 2011, between 62 and 103 civilians were killed by the CIA, according to the Bureau’s data. That period included a notorious strike on a tribal gathering on March 17  in Waziristan which killed at least 42 people. 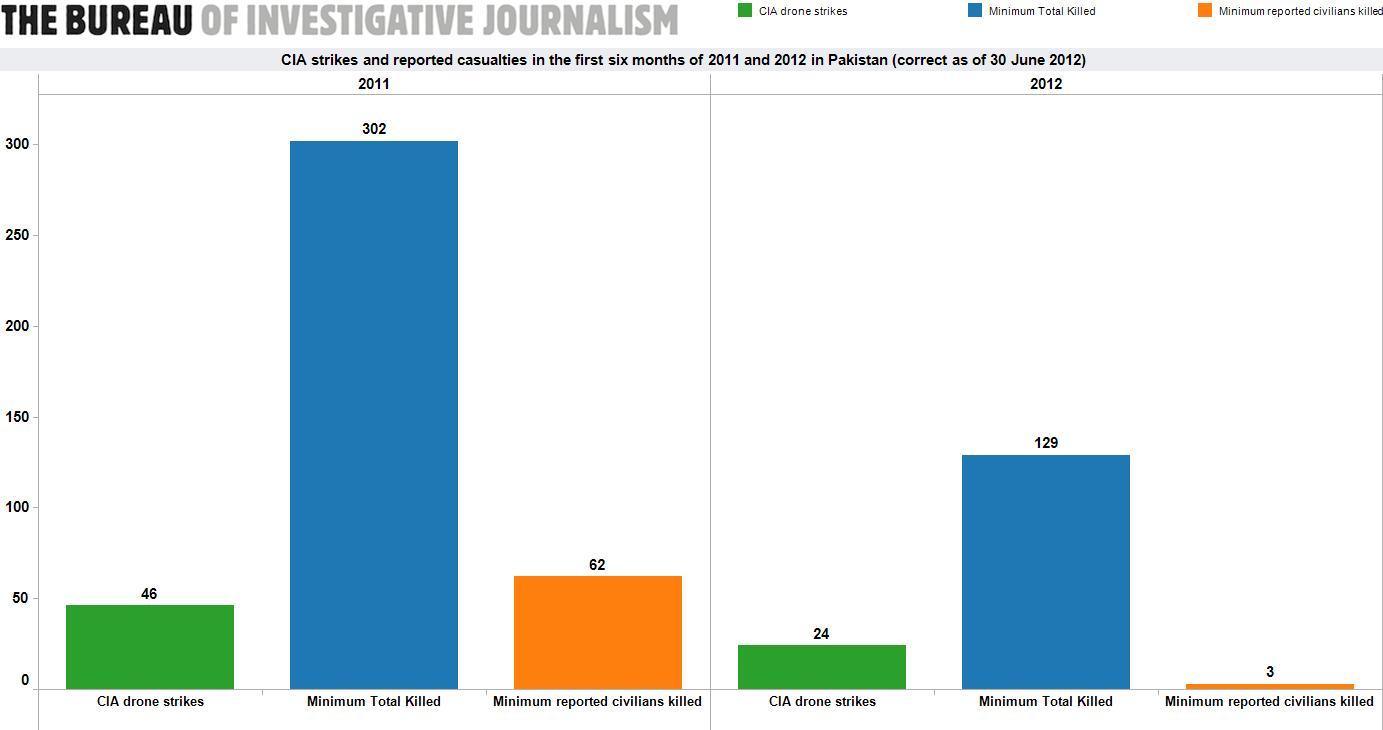 The rate of Pakistan strikes has again fallen in the past six months, continuing a downward trend from 2010. This may be because the CIA drone programme is facing unprecedented opposition in Pakistan. Islamabad has condemned recent strikes in strong terms, describing them as ‘illegal’ and ‘totally counter productive.’

The decreased strike rate in 2012 may also partly reflect Washington’s ongoing efforts to patch up relations with its ally. For example drones were almost silent in April, with only one strike killing up to six people in North Waziristan.

The spate of strikes that followed in May and early June was described by some as ‘a rampage’ and ‘a bid to punish Pakistan’. But a US official said that any pause was simply down to bad weather.

The US-backed government offensive against al Qaeda in the Arabian Peninsula and its ally Ansar al Sharia continued, with intense fighting in the south. By June 18 Sanaa’s forces had pushed militants out of their self-proclaimed Islamic Emirate in Abyan province. But on the same day the chief of Yemen’s army in the south, Major General Salem Ali Qoton, was killed by a suicide bomber.

The Washington Post confirmed in June what had long been rumoured: that US strike aircraft are flying sorties over Yemen, alongside CIA and Pentagon drones. This casts further doubt on Sanaa’s claims that its air force is responsible for most aerial bombardments.

Despite multiple reported airstrikes, few are confirmed as the work of the US, which refuses officially to comment on individual attacks. One named militant was killed in June, Salah al-Jawhari. But up to eight civilians also died in possible US strikes, among them Hussein Saleh a Yemeni staffer for the International Committee of the Red Cross. The ICRC could not initially say whether the attack was the work of a drone or a regular aircraft.

Six children and a woman were also killed when a suspected drone struck a house in Shuqra in Abyan. The operation was one of 10 possible US attacks across nine days that killed 41 to 68 people. In total as many as 117 people were reported killed in confirmed and possible US strikes in June.

Six monthly trends
The first six months of 2012 were the bloodiest the Bureau has yet recorded in Yemen. From January to June between 140 and 176 people were killed in 18 confirmed US operations. A further 252-395 died in an additional 45 strikes which may have been the work of the United States. In all of 2011, 13 confirmed US operations killed between 82 and 138 people.

As Yemen’s government reasserts control over southern towns, the true extent of civilian casualties in recent airstrikes may become clearer.

Despite President Obama recently admitting to US military action in Yemen, the Pentagon confirmed to the Bureau that it will still not comment on individual strikes, making clarification difficult.

Click here for the Bureua’s full data on Somalia.

In June as in May the Bureau recorded no US operations in Somalia. The names of seven al Shabaab leaders were added to the State Department’s list of wanted terrorists, each with million dollar bounties on their heads. The move came after it was revealed that the Pentagon had pressured President Obama’s advisers to expand the scope of the drone targets to include al Shabaab leaders.

On June 15 President Obama’s six-monthly letter to Congress – an obligation under the 1973 War Powers Resolution – acknowledged military combat operations in Somalia and Yemen for the first time. The move was unexpected, and came three days after 26 members of Congress urged the President to be more transparent about drone strikes.

Six monthly trends
US operations in Somalia have a much lower profile than those in Yemen and Pakistan. So far this year at least five people have died in two confirmed US operations, including a British suspect. Between January and June 2011 two alleged militants were killed in a single confirmed US action. 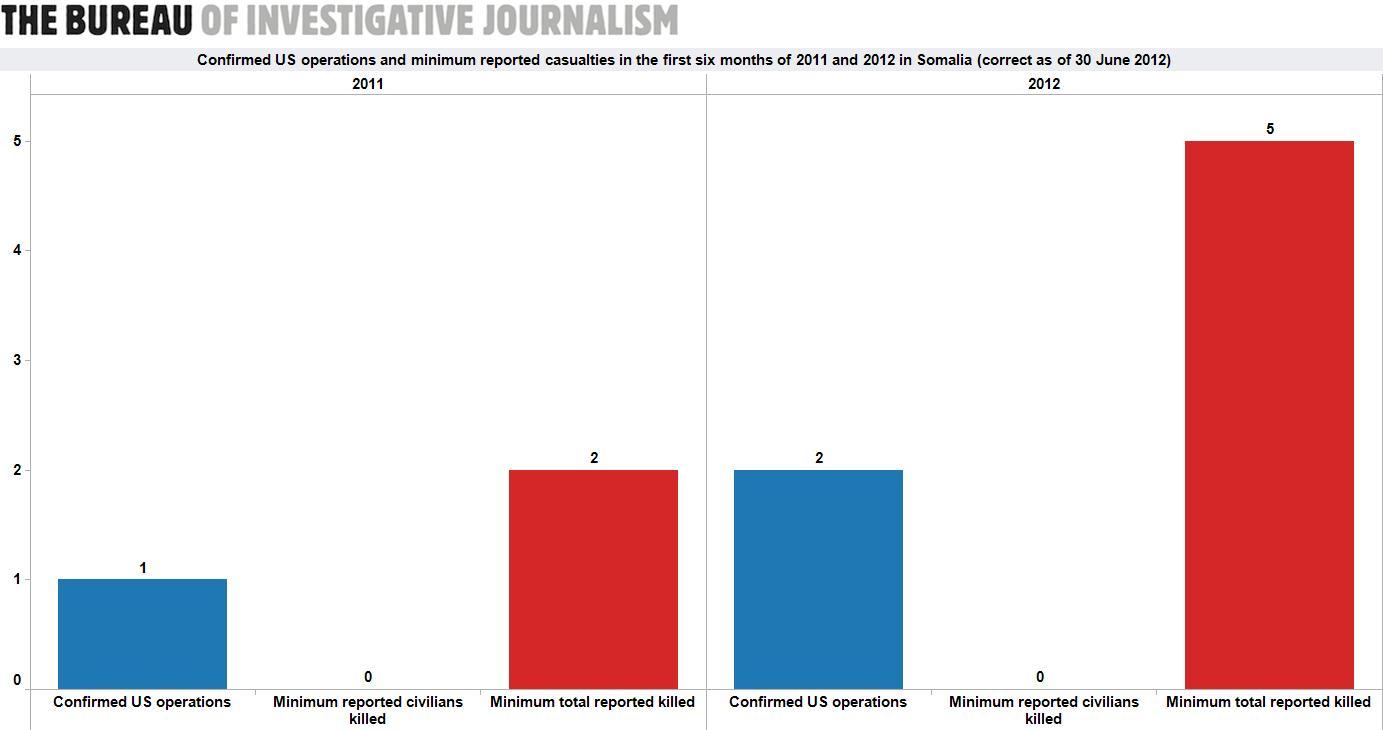 US airstrikes may be taking place in Somalia but are not being reported. Iranian broadcaster Press TV often claims attacks. However these have been found on many occasions to be false. Poor reporting may be explained by the significant challenges facing journalists in Somalia, which has been at the top of Foreign Policy’s Failed State Index for the last five years. Despite improvements in security in central Mogadishu, the country remains extremely dangerous.

Other foreign forces are also currently engaging militants in Somalia, and may be responsible for claimed attacks. The African Union’s Amison force and operations by the Kenyan military have both  impacted significantly on al Shabaab’s ranks.