Despite a significant majority of almost 100 surveyed journalists believing that the reporting of civilian casualties remains critical to broader war coverage, major US news organisations have too often failed properly to report on the issue during the five year conflict against so-called Islamic State.

That’s the key finding of a major new Airwars study into US media coverage of civilian harm during the war against ISIS in Iraq and Syria, which published on July 16th.

The Airwars study, News In Brief, is a comprehensive analysis of US media coverage of civilian casualties in the recent war against ISIS. Authored by respected investigative journalist Alexa O’Brien, the report canvasses the in-depth views of almost 100 US media professionals, with a particular emphasis on field reporters and defence correspondents.

With more than 29,000 civilian deaths locally alleged from US-led Coalition actions in Iraq and Syria, the report asks whether “US readers, listeners and viewers obtained a proper sense of the cost of modern war?”

Airwars also looked at the frequency and character of actual US newspaper coverage of the issue during two key periods of the conflict. A third review examined any references to civilian harm at more than 900 Pentagon press briefings since the war against ISIS began in August 2014. O’Brien’s study also includes five practical recommendations to managing editors, to help improve reporting on the issue in future conflicts.

“Media professionals are clear that the issue of civilian harm is central to war reporting.  And airpower dominated conflicts, especially when conducted without large contingents of US ground forces, necessitate even greater scrutiny and more consistent oversight by major media institutions, not less.” says report author Alexa O’Brien.

A significant majority of media professionals believe that it is the responsibility of news outlets to investigate all major cases of civilian harm during US wars. Coverage is critical not only for a proper understanding of war itself, but also to help ensure the proper oversight of US government and military strategy, policy, and operations, journalists said.

As one reporter put it to O’Brien, “I always see the civilian casualty stories as an important way to remind people, ‘Hey, this is not antiseptic.'”

Yet when Airwars measured actual coverage, news reporting on civilian casualties from US-led actions against ISIS was found to be largely absent during key periods of the conflict. For entire months, no major US news organisations reported on civilian harm resulting from US-led Coalition actions – although the alliance itself has since confirmed many such deaths.

“Declining foreign bureaus and newsroom staff at US media outlets; a ferocious news cycle dominated by domestic politics; the quandary of credible sourcing for civilian casualty claims; little opportunity to embed with US troops on the ground; and the expense and risk of security and logistics for reporters in the field” all helped contribute to generally poor reporting of civilian harm, Airwars concludes.

Major US media were also five times more likely to report on civilian harm from Russian and Assad regime actions at Aleppo than they were from US and allied actions at Mosul, the study found – despite similar levels of locally reported civilian harm in late 2016. That suggests a reluctance by newsrooms to engage on the issue when US forces are implicated, the report suggests.

Reporters in newsrooms are themselves aware of the challenges it seems, with 63% of those surveyed saying they were somewhat or very unsatisfied with US media industry coverage of civilian harm during the war against ISIS. 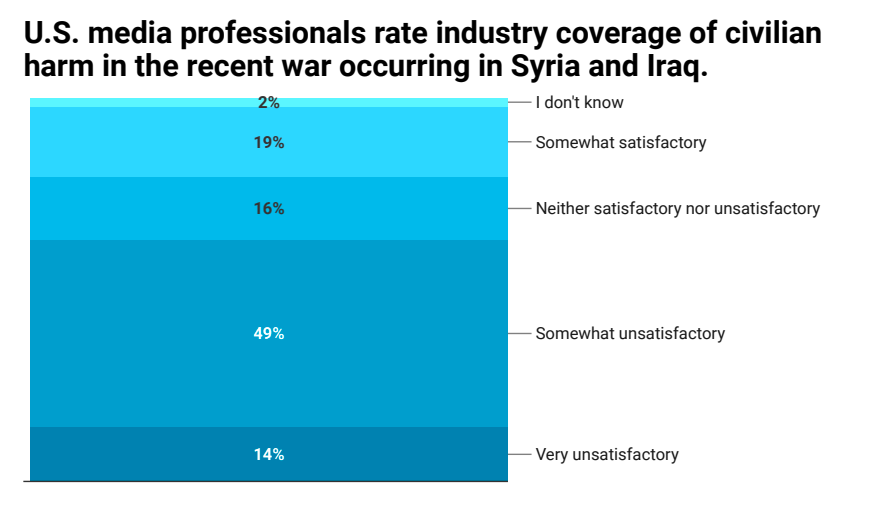 More than 60% of surveyed journalists felt that US media coverage of civilian harm was unsatisfactory..

Importance of field and home reporting

The Airwars study finds that reporting from the field remains critical to proper coverage of civilian harm issues. Field reporters write most of the copy about the subject. They are also considered best suited to do so, those surveyed said.

Yet civilian casualty coverage by field reporters is generally not adequately prioritized in the pool of available resources, reporters complain. This contributes to an inability to properly cover the issue. During the culmination of the battle for western Mosul in early 2017 for example, there was effectively no major US media coverage of civilian harm the study found. During those same months, more than 1,100 civilian deaths from Coalition actions were locally alleged across Iraq and Syria.

With limited reporting from the field, the onus is on home reporters to cover the issue. Once again Airwars identified significant challenges. The study found that the Pentagon press corps rarely verbally inquired about Coalition-related civilian harm during the conflict against ISIS, even when reporting from the field was limited. A survey of more than 900 US Department of Defense transcripts found that officials were, for example, the first to raise civilian harm in three-quarters of the press conferences or briefings in which the issue was broached since 2014.

In one case the report cites, a senior Coalition official opened a Pentagon press briefing by announcing an inquiry into a reported major civilian harm event at Mosul that weekend. In the hour long discussion which followed, no reporters asked any questions about the incident.

Challenges in the coverage of civilian harm were not solely due to proper resourcing or job demarcation issues, but also to sourcing concerns. In the absence of reliable or credible information about civilian harm via field reporters, media professionals say they need increasingly to rely upon open-source material and analysis; and reports from inter-governmental and humanitarian organizations, and monitors.

Journalists also say they rely on specialist non- governmental organizations—like Airwars—that monitor civilian harm outside the conflict zone, as well as those that investigate it on the ground, more than they rely on official US government or military sources, evidencing the significant role that such organizations now play in reporting on the topic. Reporters also say that these organizations and eyewitness accounts have more credibility than official US sources regarding civilian harm.

As a result, some media professionals expressed support for a reputable and commonly accepted industry-wide methodology or standards for alternative civilian harm counts, that can be used to help credibly report on the topic during conflicts.

There are also concerns that the US military’s limited responses to journalists’ information requests thwarted news coverage about civilian harm claims, or made it more onerous and resource intensive to report on. Industry professionals said that the military’s responses were often not complete or timely enough to meet deadlines; and that as journalists they then had to conduct extensive and costly investigations or follow-ups to obtain the information required to perform due diligence.

Finally, more than half of US media professionals who were surveyed said that they are not sufficiently prepared to report on civilian harm with regard to specific related disciplines, and that they would benefit from training in such disciplines. 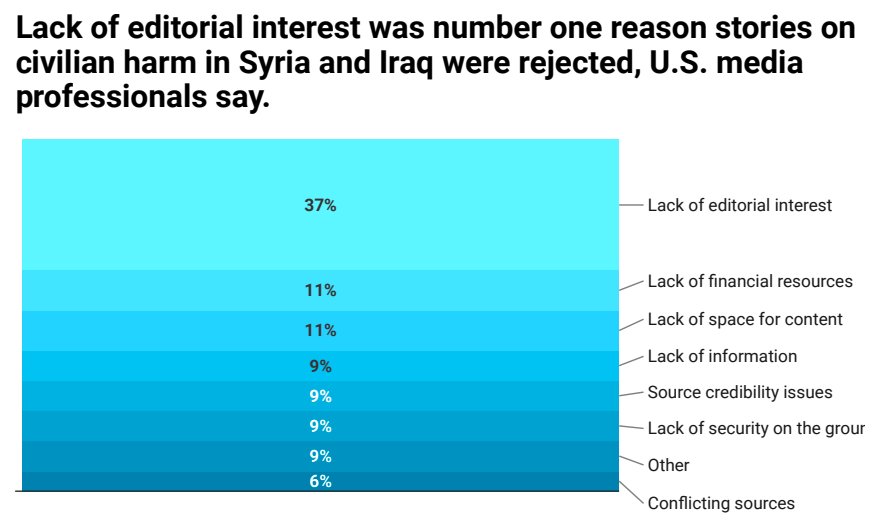 Stories on civilian harm were more likely to be rejected due to a lack of editorial interest than any other reason, surveyed reporters told Airwars

The Airwars study suggests practical steps which can be taken to help improve future newsroom coverage of civilian harm- with author Alexa O’Brien scheduled to meet with relevant editors on many major US titles in the coming days. The five recommendations are:

One key reason identified by reporters for poor casualty reporting is that the issue lacks a relevant mandate from managing editors. That in turn means the subject is generally siloed, fragmented, and largely self-directed by individual journalists.

Citing the effectiveness of newsroom mandates on the reporting of fatal shootings of people of colour by US police, News In Brief urges editors to adopt a similar mandated approach to civilian harm coverage.

The presence of properly resourced and prioritized field reporters remains a key part of ensuring that civilian harm coverage is consistent and balanced during wars. Without adequate resourcing or prioritization, reporting on casualties from US actions risks being fragmented, one-sided, or even non-existent.

While there is consensus that field reporters are best placed to cover civilian harm issues during US wars, this is not always possible.

Managing editors should therefore appropriately task and coordinate coverage of civilian harm from home, especially when on-the-ground reporting is diminished during conflicts—as with the war against ISIS.

Reliable and trustworthy counts of civilian harm are critical to reporting on the topic, and to understanding its significance in terms of the strategy, policy, and operations of the US government and military.  Such an independent effort to establish monitoring standards is currently underway by a consortium of international non-governmental organizations, led by EveryCasualty.

Journalists remarked that a reputable media industry-wide consortium, to pool resources in order to vet civilian harm claims in airpower dominated and inaccessible conflict zones, might be another solution to the increasing requirements and challenges of covering the subject adequately in future wars.

More than three-quarters of surveyed journalists say they have never received training on how to cover civilian harm in military conflicts. They are also keen to see such training, saying that it would benefit both them and their coverage of the issue.

▲ A reporter in Mosul during the battle to evict so-called Islamic State. Image courtesy of Harry Chun.