Airwars and design partners Rectangle are commemorating those civilians killed and injured in conflicts, by livestreaming over 24 hours the names of 8,337 civilian casualties the international monitor has documented in Syria, Iraq, Libya and Somalia in recent years.

The digital event marks the occasion of the UN’s 2020 Protection of Civilians Week.

Every name has a story

Over twenty-four hours starting at midnight London time on May 26th/27th – the date of the UN Secretary General’s annual Protection of Civilians (PoC)  speech –  the names of just some of the many civilians reportedly killed by air and artillery strikes in Iraq, Syria, Libya and Somalia since 2007 will be livestreamed on our website and YouTube channel.

Khaled Mustafa Qurmo and Khaled Abdel Majid were about to drop off their friend Barakat Barakat at his home in October 2019. The three friends were eating pumpkin seeds while driving through Barisha in northwestern Syria when they were reportedly hit by helicopters searching for ISIS leader Abu Bakr Al Baghdadi.

“There were so many shells falling on us, it was like rain. My hand, the one holding up Khaled’s head, got cut off,” Barakat explained to NPR last year. “Am I Baghdadi? How is this my fault? I’m just a civilian. I didn’t have any weapons. We’re farmers. I make less than a dollar a day. Now I’m handicapped, and my two friends are in their graves.”

Barakat Barakat is just one of 8,337 civilian casualties over the past 13 years whose names Airwars has recorded while monitoring conflicts in Syria, Iraq, Libya and Somalia.

Through its daily monitoring of local news organisations, social media and official sources, as well as via sources on the ground, Airwars has in total recorded over 119,000 reported civilian deaths and injuries since we began documenting conflicts in August 2014 – of which more than eight thousand casualties attributed to specific belligerents can presently be named.

This UN PoC Week, Airwars aims to commemorate those who have lost their lives, while calling for governments to better account for their military actions.

The project Conflicting Truth is in partnership with the Scottish-American design team Rectangle, who also produce the complex mapping and data representations on the Airwars website.

This week’s live cast is based on an original installation by Rectangle with Sophie Dyer, first shown in Detroit in March 2019. It had been hoped to show Conflicting Truth in New York during this year’s UN PoC Week. Instead, due to the Covid-19 crisis, the decision was taken to livecast a digital version. 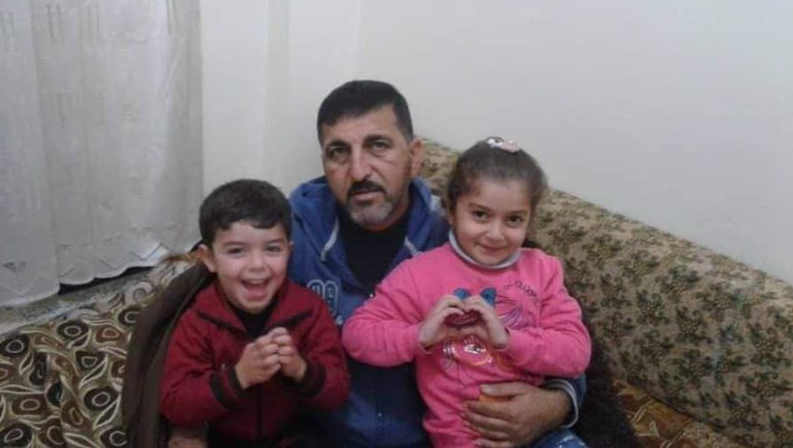 Rimas and Shahem Hamdou with their father Hamza al Haj Hamdou. The children were killed in an alleged Russian strike in Thalatheen Street in Idlib city on March 3rd 2020 (image courtesy of the Syrian Network for Human Rights)

The Airwars/ Rectangle project seeks to show that those killed and injured in conflict are not mere statistics –  they are people with names, friends and families. Their loss inflicts severe pain on relatives, and the communities they belong to.

“I was washing dishes. Suddenly our house was filled with shrapnel. I went out and called Arif (my son), but I did not see him. I only saw black smoke. When the smoke faded away, I saw my son on the ground as a martyr,” said a mother whose son Arif was among eight other children reportedly killed in alleged Turkish shelling on Tal Rifaat in Syria on December 2nd, 2019.

The suffering often does not end with losing loved ones or seeing them disabled: it also heavily impacts the lives of those spared by the fighting. “All a young man like me cares about now is how he gets home safe every day. Or when you go to bed, all you’re thinking about is the possibility that a rocket falls on you,” Marwan, a resident of the southern suburbs of the Libyan capital Tripoli recently told Airwars. “I lost friends, relatives, loved ones in this war,” he elaborates. “I’m doing an MA now, and I’m afraid to lose my dream, and my future and I can’t do anything. That makes me want to run away, to live a decent life with equal opportunities.”

Airwars aims to add as many biographical details of victims as possible. On May 16th of this year for example, the 5-year-old Bangladeshi boy Wahi Zuhair Matin was killed in alleged LNA artillery strikes on Al Fornaj neighbourhood in Tripoli. The GNA-affiliated Burkan Al Ghadab Operation wrote on Facebook that the child’s “ambition was to buy a bike and play ‘like the kids’.”

Airwars is also joining with other international partners and organisations in a Civil Society Call for Action to Protect Civilians during PoC week. The joint statement signed by 22 organisations calls on the UN Security Council, Member States, and the UN System to take urgent, bold and practical steps to respond to the challenges that remain in the protection of civilians in armed conflict.

The UN Security Council added the protection of civilians in armed conflict (PoC) to its agenda in 1999, recognising PoC as a matter of international peace and security. The UN PoC Week is held annually between May 27th and June 1st. The United Nations celebrates UN Peacekeeping Day on May 29th.

▲ The original physical installation Conflicting Truth was shown in Detroit in March 2019, and was developed by Rectangle with Sophie Dyer. It features the names of civilian victims preserved in the Airwars database. (Image courtesy of Rectangle)