May Update – US clandestine actions in Pakistan, Somalia and Yemen

A summary of US actions in Pakistan, Yemen and Somalia in the secret war on terror.

The Bureau’s Covert War project tracks drone strikes and other US military and paramilitary actions in Yemen, Somalia and Pakistan. Here we summarise our key work and findings for May.

Civilians reported killed in US strikes: 1 – 31

Of which possible additional US drone strikes: 48 – 54

As in April, intense fighting meant that Yemen again dominated the Bureau’s reporting. Five US drone strikes were confirmed by US or Yemeni officials.

However, an additional 18 possible US strikes were also reported, allegedly involving not only drones but US naval vessels and aircraft. Among these were up to four attacks by warships on militant positions. It was also confirmed that American F-15 Strike Eagles are now based at Camp Lemonier in Djibouti, adding weight to claims of US air sorties over Yemen.

With few confirmed operations it was difficult to pin down precise casualty figures. The Bureau’s data shows that between 23 and 171 people died in US operations in May, including a number of named senior militants such as Fahd al-Quso. However, among the dead were up to 31 civilians. Between 8 and 26 civilians died in just one incident in Jaar on May 15, though this may have been the work of the Yemen Air Force.

US troops were also reported to be just 40 miles from the front lines, helping to direct a Yemeni military offensive aimed at driving Islamist insurgents from cities in the south. Saying that its actions were in retaliation, Ansar al Sharia killed more than 100 soldiers in a suicide bomb attack on Sanaa.

Total CIA strikes in May: 6

Six CIA strikes hit North Waziristan in May, up from just one the previous month, even as Pakistan bluntly and publicly protested the attacks. Washington and Islamabad also continued to seek a resolution to their ongoing dispute over NATO supply routes, the deaths of 24 Pakistani soldiers last November, and the drone strikes themselves.

On May 5 the CIA killed up to ten people, including possibly civilians, in a strike the Pakistan government called ‘illegal’ and ‘totally counter-productive.’ 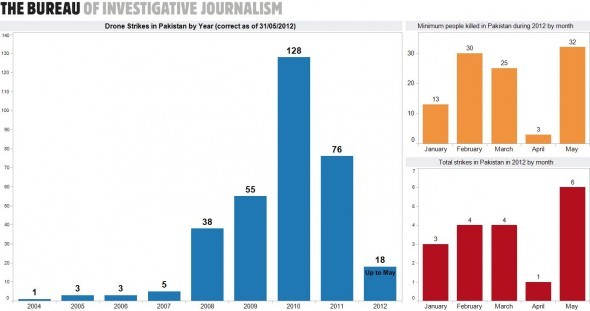 After a further 18-day pause there was a barrage of five strikes in six days. Between 24 and 32 people died – three to eight reportedly civilians. Nine others were reported injured. Among the locations hit by the CIA were a mosque and a bakery. On one occasion, drones returned after a pause of some 20 minutes to strike again, a tactic last seen in summer 2011.

Details also emerged that Barack Obama had not only been aware of civilian deaths in Pakistan drone strikes since the start of his presidency, but that he had also authorised the widening of the definition of ‘combatant’ to incorporate all adult military-aged males killed.

Total casualties from US operations: 0

There were no reported US military actions in May.

Separately, on May 22 the European Union launched its first known strike against a land-based pirate operation, destroying nine speedboats, an arms dump and fuel supplies.

Previously restricted to intercepting pirates at sea, on March 23 the EU had expanded Navfor’s mandate to allow for strikes on pirate supplies and infrastructure. The EU agreement stipulated that individuals cannot be targeted and soldiers cannot land on Somali soil.

Significant elements of the operation remain unclear. Navfor said its strike was carried out using helicopters ‘organic’ to the flotilla’s ships, though would not identify which nations had carried out the strike.

Following the Bureau report that the French amphibious assault ship Dixmude and its contingent of Tigre attack helicopters had not taken part in the attack, an anonymous intelligence officer told Defence Report that the destruction of the pirates’ boats could only have been achieved with the aid of a ground assault. If so, it was unclear which nation’s troops would have carried out such an attack.

A boy was reportedly left in a critical condition on May 29 after two Kenyan warships shelled Kismayo, an al Shabaab controlled port in the south of Somalia. The Kenyan navy claimed al Shabaab fired on the vessels first. The residents of the town and the militant group contradicted this, saying the shelling was unprovoked.

Somalia: Although no US activity is recorded the EU attacks pirates onshore for the first time in a possible ground-based military action. Read more here.