Archive image of munitions being loaded onto a Dutch F-16, during the war against ISIS (via Defensie).
Web link

The Dutch Minister of Defence, Ank Bijleveld, has reported to Parliament on the latest progress made by the Government in improving transparency regarding civilian harm as a result of Dutch military actions. Coupled with other steps taken in the months after the Hawijah scandal, the Netherlands appears slowly to be shedding its reputation as one of the least transparent members of the international Coalition fighting so-called Islamic State.

In her June 29th letter to Parliament, the Minister laid out a number of changes which she claimed would improve both transparency and accountability. The letter followed on from a fourth parliamentary debate on May 14th on the Hawijah case. Back in October 2019, it was revealed that the Dutch military had been responsible for a 2015 airstrike in Iraq, which had led to the deaths of an estimated 70 civilians. The Government had then withheld that fact from the public for more than four years.

An important topic during the fourth debate was the April 21st release of key US military documents on the Hawijah incident. The US Department of Defense had provided those previously classified documents to Dutch media, after a judicial procedure following an unanswered Freedom of Information Act (FOIA) request.

Four months earlier, Minister Bijleveld had filed a request with her US counterpart Defense Secretary Mark Esper publicly to share the documents, including the American DoD’s own investigation into Hawijah. She received a negative response to that request on February 28th. However, MPs say they found it difficult to understand why the Minister was not given permission to share the documents, when they were publicly released to the press just two months later.

The contents of those documents revealed that US officials had been aware that an airstrike on the targeted ISIS IED factory in Hawijah could possibly present a significant risk to civilians. CIA informants had, for example, warned the Coalition about civilians living in the area. Furthermore, while Minister Bijleveld has continuously stated that all procedures leading up to the Hawijah strike were followed correctly, the US investigation revealed that Coalition target development processes had been amended after the deadly event, as they had proved to be insufficient. This was not reported to Parliament by Dutch defence officials. 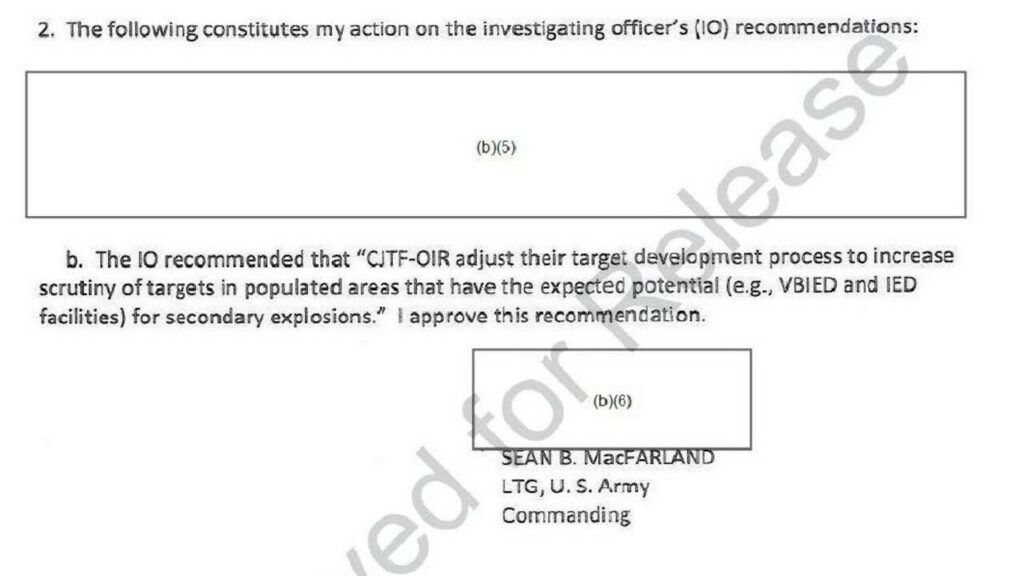 Excerpt of the key US documents released to Dutch media in April 2020. LTG Sean MacFarland approved the recommendation to adjust the Coalition’s targeting development processes.

It was in this context that the Minister, once again, recently had to explain herself in front of a clearly frustrated Parliament. During the May 14th debate, Bijleveld said she shared the frustration of MPs regarding what was characterised as poor communication from the Americans and the Coalition.

In her letter of June 29th to MPs, the Minister wrote that she had met with her US counterpart Mark Esper earlier that day and that he had, in her words, “deplored the course of events, endorsed the importance of transparency and indicated that his department had done everything possible to provide the correct information.”

One major criticism of Hawijah was that the Dutch ‘red card holder’ had agreed on the strike taking place – despite the known risk to civilians in the area. The Red Card Holder  (RCH) was the Dutch representative in the Combined Air Operations Center in Qatar, with the option of vetoing actions which fell outside Dutch rules of engagement. According to Bijleveld, as of July 1st, the instructions for the Dutch Red Card Holder have been updated in line with a successful parliamentary motion. From now on, she noted, the red card holder must proactively request important information related to future airstrikes the Dutch military may carry out. In the case of Hawijah, the Dutch RCH was, for example, unaware that the Americans had intelligence suggesting that a possible airstrike posed a risk to civilians.

The Minister’s latest letter also states that the MoD expects to complete its updating of internal reporting procedure on civilian harm in the second half of 2020. The process of informing the Public Prosecutor’s Office (OM) has already been updated: from now on, the OM will be informed as soon as the MoD starts an investigation into any civilian harm allegation. In the case of Hawijah, it took Defensie nine months to inform the OM.

On June 23rd, the minister additionally proposed a new procedure to inform Parliament of any investigations into civilian harm during future Dutch missions. Whereas the initial plan was to inform Parliament confidentially, the Minister now suggests that due to “the importance the parliament attaches to public transparency”, the default will instead be for the defence ministry to publicly inform parliament of such cases, unless this “is impossible, according to the Minister.”

According to Lauren Gould, Assistant Professor in Conflict Studies at Utrecht University and project leader of the Intimacies of Remote Warfare project, the Minister’s proposal contains several loopholes: “This is history just repeating itself: the Minister uses the catchphrase ‘national, operational and personnel security’ and is exempt from being transparent or being held to account for a lack of transparency. It should be clearly defined when the parliament finds it acceptable that a minister does not inform the broader public. The minister will have to prove that these exceptional circumstances are at play.”

Gould continued: “Furthermore, the question remains: what information will Defensie share with parliament? They’ve stated multiple times that as a small country, the Netherlands is unequipped to independently investigate the nature of targets or the civilian casualties that occur. There’s nothing in the procedure about how they will tackle one of the main problems in the Hawijah case: that crucial information collected by the US about Dutch military actions was withheld from the Dutch parliament and public.”

In her June 29th letter to Parliament, the minister also noted that on June 10th, Defensie personnel had spoken with Basim Razzo, a survivor of another 2015 Dutch airstrike, which had killed four relatives when Mr Razzo’s Mosul home was bombed by a Dutch F-16 as a result of an intelligence error. Mr Razzo himself was severely injured. According to Minister Bijleveld, discussions are continuing with Mr Razzo’s counsel, human rights lawyer Liesbeth Zegveld.

Earlier, the Minister had promised to explore possibilities to voluntarily aid local projects for the devastated community in Hawijah. There have, it’s now emerged, been talks between the Dutch embassy and local authorities on the matter. The Minister writes that Defensie has identified several local organisations operating in Hawijah; and that these have been asked what their community needs. Bijleveld says she hopes to inform Parliament of developments after the summer recess.

“To prevent this information from reaching Parliament in another manner”, the Minister also note that local authorities in Hawijah have expressed concerns about possible undefined radiation after the Dutch airstrike in June 2015. According to Bijleveld however, the munitions used in the attack were not capable of producing radiation. Both the MoD and the Dutch Ministry of Foreign Affairs say they will explore whether the concerns of Hawijans can be verified in another manner.

The Minister also reports on a lawsuit filed by human rights lawyer Zegveld in the name of Hawijah’s victims. According to Bijleveld, the Dutch Cabinet has sent a note of sympathy to the victims and their relatives, but claimed that an offer to begin a conversation was rejected.

Explaining that rejection, lawyer Zegveld told Airwars: “[The Minister] wanted to have a one on one conversation ‘human being to human being’ with the Hawijah victim living in the Netherlands. He was expected to come alone, without me or anyone else. We did not agree to that. It’s not about the person Bijleveld, but about her responsibility as a Minister.”

Along with the Minister’s latest June 29th letter to Parliament, the MoD has now also published its weekly reports of all anti-ISIS airstrikes in Iraq and Syria between 2014 and 2018 as open data, after recent requests from Airwars and the Open State Foundation.

“While Airwars welcomes this next step towards a more transparent Defensie, the content of the data is still below standard,” says Airwars deputy director Dmytro Chupryna. “Other Coalition allies such as the UK already report the specific date, targets and near locations of their airstrikes. For Defensie to become more transparent, improving their reporting on airstrikes really is one of the first steps to take.”

▲ Archive image of munitions being loaded onto a Dutch F-16, during the war against ISIS (via Defensie).