Despite receiving comprehensive findings on 38 civilian deaths five months ago, CENTCOM has yet to respond says human rights group.

The Yemeni human rights group Mwatana has accused US Central Command of being “very disrespectful to victims”, after it emerged that CENTCOM has still not publicly responded to a major investigation into civilians killed by US airstrikes and ground raids. Given five months’ advance notice of the findings of the investigation, which comprehensively detailed the deaths of at least 38 civilians in twelve likely US actions in Yemen during the Trump presidency, Mwatana says that CENTCOM has still not responded.

The 124-page report from Mwatana, ‘Death Falling From The Sky’, was eventually published in late March without input from CENTCOM. It presents a grim view of an intensive campaign by the US military under President Trump to target alleged Al Qaeda fighters in Yemen, part of a long-running counterterrorism effort begun by Barack Obama in 2009.

In total according to Airwars monitoring, a record 327 US airstrikes and ground actions in Yemen were alleged during the Trump presidency, of which 181 were officially declared. As many as 199 civilian deaths were locally alleged, with Airwars presently estimating that, based on the available public record, between 76 and 152 civilians were likely killed by the US in Yemen under Trump in 26 incidents.

Mwatana’s own report focuses on just twelve of these events – recording in meticulous detail the devastating effects of some US actions on local communities. Dozens of family members, survivors and eyewitnesses were interviewed in person. Comprehensive paperwork including hospital records and university and workplace documentation was gathered, confirming the civilian status of victims. Photographs and videos detail injuries to victims and damage to homes.

“The standard of information, and what we were able to get from the ground, is built on years of Mwatana work,” says Bonyan Jamal, an accountability officer at the Yemeni human rights organisation. “Thanks to our incredible researchers, and high quality work, we are able to speak directly to families and gain their trust.”

All twelve events documented by Mwatana were already publicly known – though civilian casualties have only been admitted by CENTCOM in one case. A detailed review by Airwars of ‘Death Falling From The Sky’ found it to be meticulously researched and documented; and conservative in its estimates of civilian harm from US actions. Victims were only identified, for example, after being explicitly named by witnesses and surviving family members. In any case where the combatant status of a casualty was less than clear, they were excluded from the potential civilian tally.

A disastrous US raid on the village of Yakla in late January 2017 killed up to 12 civilians, CENTCOM itself has confirmed. Others have placed the toll far higher. In its own estimate, Mwatana conservatively says that at least 15 civilians died that day. “For the Yakla event, we respect that others have reached different findings,” says Kristine Beckerle, legal director, accountability and redress at Mwatana. “We never say ‘these are all the people killed that day’. What we can say is that we are confident in those victims that we name.”

That conservative approach makes the investigation’s conclusion all the more damning. “This report raises serious concerns about the extent to which the United States is complying with international law in its use of lethal force in Yemen,” Mwatana asserts. “It finds that the United States is failing to investigate credible allegations of violations, to hold individuals responsible for violations to account, and to provide prompt and adequate reparations.” 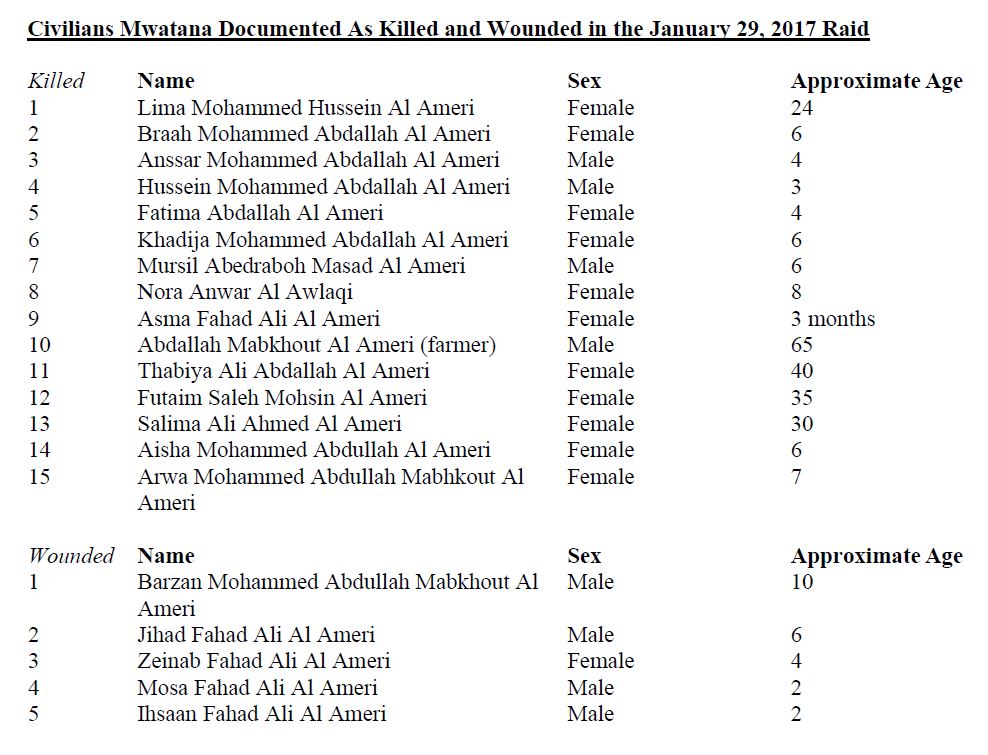 Mwatana’s list of fifteen named fatal victims of a US raid on Yakla, Yemen in January 2017.

US silence on deaths of women

Each of the twelve events detailed in the Mwatana investigation provides such compelling evidence of civilian harm that CENTCOM’s continued silence appears inexplicable.

More than three weeks after the incident itself, a public US Central Command statement had for example confirmed that a US strike had taken place in the Yemeni province of Bayda on December 15th 2017, which it indicated had resulted in the death of Miqdad al-Sana’ani, described in the press release as an “external operations facilitator” for Al Qaeda in the Arabian Peninsula (AQAP). CENTCOM made no mention of civilian harm.

The only locally reported action in Bayda that December day was again in the village of Yakla – where all local sources agreed that a likely US drone strike had killed Hajera Ahmed Saleh Al Taisi, 33 years old and pregnant, and her 63-year old aunt, Dhabia Ahmad Al Taisi.

According to Mwatana, “On the day of the strike, Dhabia was visiting Hajera’s home, about 90 meters from Dhabia’s own small house. At about 6pm, as Dhabia was leaving the house, the strike occurred. The strike hit right next to the entrance of the house, killing Dhabia, who was standing by the door. Hajera was in her kitchen. She was hit by shrapnel in the neck, which ripped through her back. The surrounding homes suffered varying degrees of damage from the strike.”

According to one report, a man was also killed in the attack who may have been the AQAP suspect al-Sana’ani. Yet there is no dispute locally that two women died that day. As Hajera’s husband told Mwatana, ‘My wife was expecting a child; the shrapnel killed her and her fetus … The life of people and their movements are almost paralyzed by fear.”

Kristine Beckerle says this was one of the events she had expected CENTCOM to concede: “Maybe, I thought, they would admit the case of these two women – one pregnant, killed in their house. There is no advantage I can see to their not engaging on this case. Yet we have had no response until now.”

The #UnitedStates has never fully investigated the civilian cost of its operations in #Yemen, and has never taken sufficient steps to review the efficacy of these operations.

US Central Command was first provided full details of the Mwatana investigation on November 4th 2020, says accountability officer Bonyan Jamal. “They have had more than five months to respond. We even delayed publication several times to give them the opportunity to respond. That CENTCOM didn’t even take the time to write a proper response to express their position on these findings is very disrespectful to victims.”

This echoes other recent experiences with the US’s largest combatant command. As this organisation recently noted in its own recent Yemen study Eroding Transparency, “Despite Airwars providing CENTCOM with its complete civilian harm findings on Yemen during the Trump presidency nine weeks prior to this report’s publication, officials unfortunately failed to provide any event responses.”

CENTCOM also had to issue an apology in late 2020 as a result of what it described as an “administrative error”, after conceding it had forgotten its own earlier public admission of the killing of up to 12 civilians during the raid on Yakla village in early 2017.

Accountability for civilian harm at CENTCOM appears to be in decline across several theatres under current commander General Kenneth ’Frank’ McKenzie, who took up his post in March 2019. As Airwars recently noted in its annual report, 2020 saw an unexplained 80 per cent drop in the number of civilian harm allegations deemed ‘Credible’ by CENTCOM assessors working with the US-led Coalition in Iraq and Syria. And in Afghanistan, US forces have taken an increasingly robust stance against UN data which continue to flag concerns about civilian harm from international actions.

“The great majority of alleged civilian deaths and injuries from US military actions each year are within CENTCOM’s area of responsibility. And we need to see significant improvements in its identifying, reviewing and reporting of those claims,” says Chris Woods, director of Airwars. “Mwatana’s investigation is scrupulously researched and offers compelling evidence of at least 38 civilians likely killed in recent US actions in Yemen. It is not good enough for CENTCOM apparently to ignore that evidence for more than five months.”

▲ Villagers in Jaeir, al Bayda, protest a reported US strike in January 2019 that killed a 67 year old civilian man, according to Mwatana investigators and local sources