Last week’s US air operation in Somalia took the total number of strikes carried out in 2017 to a record 29, raising the possibility of an expansion in military operations outside of conventional battlefields under President Donald Trump.

Trump’s predecessor Barack Obama had already escalated strikes in Somalia to 14 a year, reflecting the growing number of attacks by al Shabaab insurgents.

However, since Trump came to office the rate of drone strikes in the East African country has doubled. This partly reflects new rules introduced by the Trump administration in March 2017 which exempted swathes of Somalia from restrictions on targeting procedures introduced by Obama in response to concerns about civilian casualties.

In 2013, Obama brought in measures that meant that strikes in areas that were not active warzones – places like Pakistan and Yemen – had to go through an elaborate sign-off process with the White House. 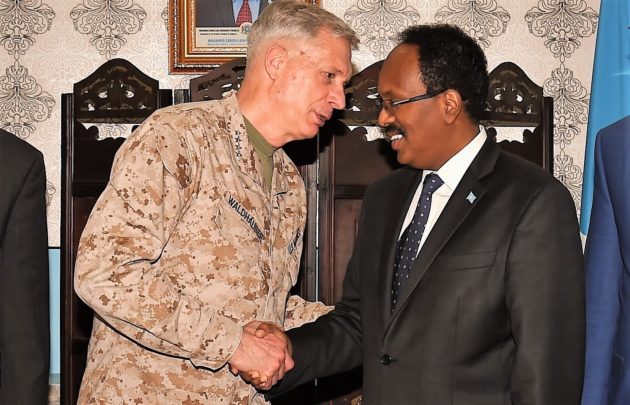 This does not necessarily mean that Obama-era measures designed to protect civilians from harm have been thrown out of the window.

General Thomas Waldhauser, the man in charge of US military operations throughout Africa, told journalists at the time that though he now had leeway to order strikes without clearing it with the White House, he would be retaining the criteria introduced by Obama that a strike could only happen if there was a near-certainty that no civilians would be harmed.

But the change of rules does seem to have paved the way for greater US military activity in Somalia, the consequences of which are unclear.

The US’s counterterrorism activities in Africa have traditionally been a fraction of those in other parts of the world. Even the record number of strikes launched in Somalia this year amounts to less than a quarter of the number to hit Yemen.

But the US’s involvement appears to be gradually deepening, and not just through air strikes.

The US has around 500 soldiers stationed in Somalia, including special forces advisers that accompany Somali troops and Amisom – the African Union mission in Somalia – on operations. On several occasions this year, the US has been compelled to provide them with close air support when they have come under attack from al Shabaab insurgents.

There is also a coordination cell in Mogadishu staffed by American officers who coordinate operations with Somali and Amisom commanders. US drones and jets are based in Djibouti to the north of Somalia, where Africom runs its operations across East Africa.

It is hard to say how extensive the US’s operational activity on the ground is and whether or not it is increasing. Officials won’t say how often US forces have carried out “partnered ground operations” this year, though will confirm US involvement when questioned about individual incidents. In addition to the four partnered ground operations that needed air support, three others have come to light in 2017. Two proved controversial: they caused either American or civilian casualties.

On 25 August 10 civilians were reportedly killed in a US-Somali operation in Bariire, southern Somalia. Villagers had spotted they were under surveillance had told the Somali military that they were civilians and there was no Shabaab there, fearing an assault.

On 5 May a US Navy Seal died in an operation against al Shabaab. The SEALs and their SNA partners were flown in by helicopter, but came under fire “in the early phase of the mission” after landing near an al Shabaab compound, the target of the mission. Senior Chief Special Warfare Operator Kyle Milliken was killed in the ambush.

The increased US military activity in Somalia of course does not occur in a vacuum – al Shabaab have launched bold and ruthless attacks over the course of the year. 10 of this year’s 29 strikes have been carried out since 14 October when an al Shabaab bomber detonated a truck bomb on at a busy intersection in Mogadishu, killing more than 350 people and wounding as many more.

Somali officials have connected the increase in air attacks with the October suicide bombing, though the US command in Africa would not confirm this.

Main picture, of a Reaper drone, courtesy of USAF.