‘No place to hide’: Speaking up for armed drones

As US under-secretary of defense in the early 1990s, Major General Kenneth Israel was one of the first to see the potential of combat drones. Now a vice-president of arms manufacturer Lockheed Martin, he was in London recently to chair a conference on UAVs, where he spoke to the Bureau.

How did armed drones come about?

This is the tenth year anniversary of putting weapons on unmanned systems. That was not a serendipitous decision, it was there because we have tried to change the paradigm in terms of separating operations and intelligence and make them seamless. So now we don’t talk about ops and intelligence, we talk about the ops, intel symphony, of having them working together. And it’s hard to tell where intelligence begins and ends and then where operations begin and end. I’ll give you an example [of how it used to be] – Zarqawi, killed in 2006. We had 600 hours of ISR [intelligence, surveillance and reconnaissance] looking exactly at what all the indicators were in terms of his patterns of life, where he visited, basically what his behaviour profile was. But the actual killing was not done by a UAV, it was done by two F16s dropping a JDAM [‘Bunker Buster’ bomb].

HVTs [high value targets] were beginning to understand that there was a gap, a lapse, they had about 5 to 10 minutes when they could do something and move out of the area because there was no weapon system. But now we’ve changed that, by coupling a weapons system with an ISR asset, so that now every sensor should be a shooter, and every shooter should be a sensor. So what we have now done is change the dynamic in our favour. And when I say in our favour, in the Coalition’s favour, in terms of basically being able to respond immediately to a lethal intention with a lethal response, if and when it is required.

You’re described as one of the fathers of the modern drone – does it surprise you how ubiquitous they’ve become? 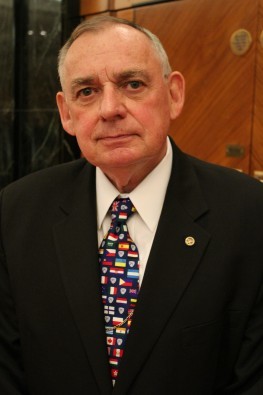 Our country, our ally countries, will never go back to a pre-911 condition in terms of how we respond to extremis threats. Evil is real – your ability to respond to real evil is part of every individual nation’s response. To me, if your tactic is to wait until the vulnerability period of time and then at the moment of weakness to execute your decision to kill, to strike, to do some damage, we’ve taken that away, there’s no place to hide. And the fact that we now have persistence, which UAVs provide, that we can keep airborne assets up 24 hours a day and the fact that they are now armed with Hellfire, JBU-12 and -38 bombs, we can even drop them by GPS capability or with lasers. We now can very precisely aspire to any kind of spur of the moment attack at all times of the day or night. There is no place to hide and there is no time for anybody to take a cheap shot. We have to be on guard 100% of the time. The adversaries only have to get it right once. So what we’re trying to do is say, ‘The cost of getting it right once is so high now, that it would discourage anybody trying to do so.’

Will there come a point when everyone has armed UAVs – including our traditional and non-traditional enemies?

At some point in time we will have UAV-on-UAV warfare. It is not something I fear….

The bottom line is networked forces will always outfight non-networked forces, and so if we see a renegade or a low tech adversary get their hands on a UAV, what are they going to do with it? I mean there are things you can do to neutralise that and I can tell you we are continuing to advance the state of the art. Yes it’s something I think most modern countries are preparing to deal with. So that is not an area of concern – we’re prepared for it and we’re going to stay ahead of any potential adversary fielding that kind of capability.

And I will trade a printed circuit board for the life of a British soldier, an American soldier, Italian soldier, [and in] any other NATO country using UAVs with weapons today, for an extremist like Awlaki, Zarqawi

It’s argued that there is no risk in the platform, no risk to the pilots versus those on the battlefield – even that drones are cowardly.

I would not say it’s a strong argument, I would say it’s an old argument that has resurfaced. Tell me the morality that was involved in Dresden. The Germans had zero air defence capability. And we went ahead and bombed Dresden. Take a look at the bombs on Nagasaki and Hiroshima, we still did that…. So when we say that everything has to be reduced to a knife fight before there can be an element of morality, that’s not the issue at all. The issue is, let’s try to reduce all the countries with drones to a lowest common denominator, because what is the morality in an IED? Is there any difference in indiscriminately using an IED in terms of giving someone who’s about to be blown up by an IED indications and warning? A fair fight? Is the implementation of an IED a morality issue? I have not heard one, there has not been one article written about the morality of IEDs. And the reason there hasn’t been one article is because nobody wants to raise it as an issue. I raise it as an issue to say that the unmanned system with a weapon is as moral as an IED being implemented in an area where you know civilians are going to be innocently, asked to give their lives.

What of the concern that technology is running ahead of our ability to manage it? That drones are defining modern war, for example with the recent killing of Awlaki, or of labelling civilians as combatants? Are you pushing too far ahead?

When you talk about the element of surprise in warfare, typically you want to prevent the element of surprise in warfare because whoever has that, typically gets the upper hand.… Does technology mean… there’s an unfair advantage in warfare? Yeah, there is! If we had not dropped the atomic bomb would it have been worth, there are various estimates but the loss of 500,000 US lives to go in and take over the homeland of Japan? It was a very courageous decision made by President Truman and the National Security Adviser. The fact that there was, the Germans used V1 and V2 weapons starting June 6 1944 lasted a year, 10,000 innocently killed Brits, no defences. And that isn’t brought up either in terms of a moral outrage.

So to me, this is kind of like, here’s an opportunity to say what we can’t win on the battlefield, let’s see if we can’t win it in the court of public opinion and in the legal argument, what we cannot do…

So I don’t see how a few should be allowed to use any argument they can to try to shift what the element of surprise is and what they’re focused on right now because it seems to have a certain, I didn’t want to say sympathy but awareness that if we just focus on this technology, maybe it will force America, which uses UAVs with weapons more than any other country, to rethink or to not be allowed to continue to use it.

But I would say this, I am very much in favour of the continuation of using unmanned systems with precision weapons to fight the asymmetrical threat that we’re fighting today because it’s the perfect weapon. We have people that are unreasonable, we have people that do not follow the laws of armed conflict, and since you are in that kind of a conflict you might as well have a weapon system that if you lose it, you do not lose a life, you are losing a printed circuit board. And I will trade a printed circuit board for the life of a British soldier, an American soldier, Italian soldier, [and in] any other NATO country using UAVs with weapons today, for an extremist like Awlaki, Zarqawi, Gadaffi, because in his 25-vehicle convoy the very first vehicle that was taken out, was taken out by a UAV, so it stopped the convoy. And how about Osama bin Laden? They were there and part of it.

Go back to the Nuremberg Trials. It wasn’t a country that was the problem, it was the leadership, and so what we’re attacking is the leadership of some extremists and trying to neutralise them and they have an option to stop what they’re doing and reform and get back to the norms of a civilised world and society.

This is an edited interview