November 2012 Update: US covert actions in Pakistan, Yemen and Somalia

A US Reaper taxis at Kandahar Airbase, Afghanistan (ChuckHolton/Flickr).

Pakistan: CIA drone strikes return to Pakistan after a 36 day pause, as Washington sets out to codify its covert drone strikes policy.

Yemen: A strike nine miles from Sanaa targets a Yemen army colonel and alleged militant. But his family and others question why he was not arrested.

Somalia: Once again no operations are reported in Somalia.

Total killed in strikes in November: 0-4, of whom 0 were reportedly civilians

A CIA drone strike killed up to four on November 29, ending a 36 day pause between attacks. This is the longest break between strikes since the 54 day hiatus from November 17 2011 to January 10 2012.

Pauses between strikes are often a consequence of external events. The unusual length of this pause – and reports of US officials trying to develop a drone strike rule book – might indicate that the CIA paused strikes while the drone programme was reviewed. 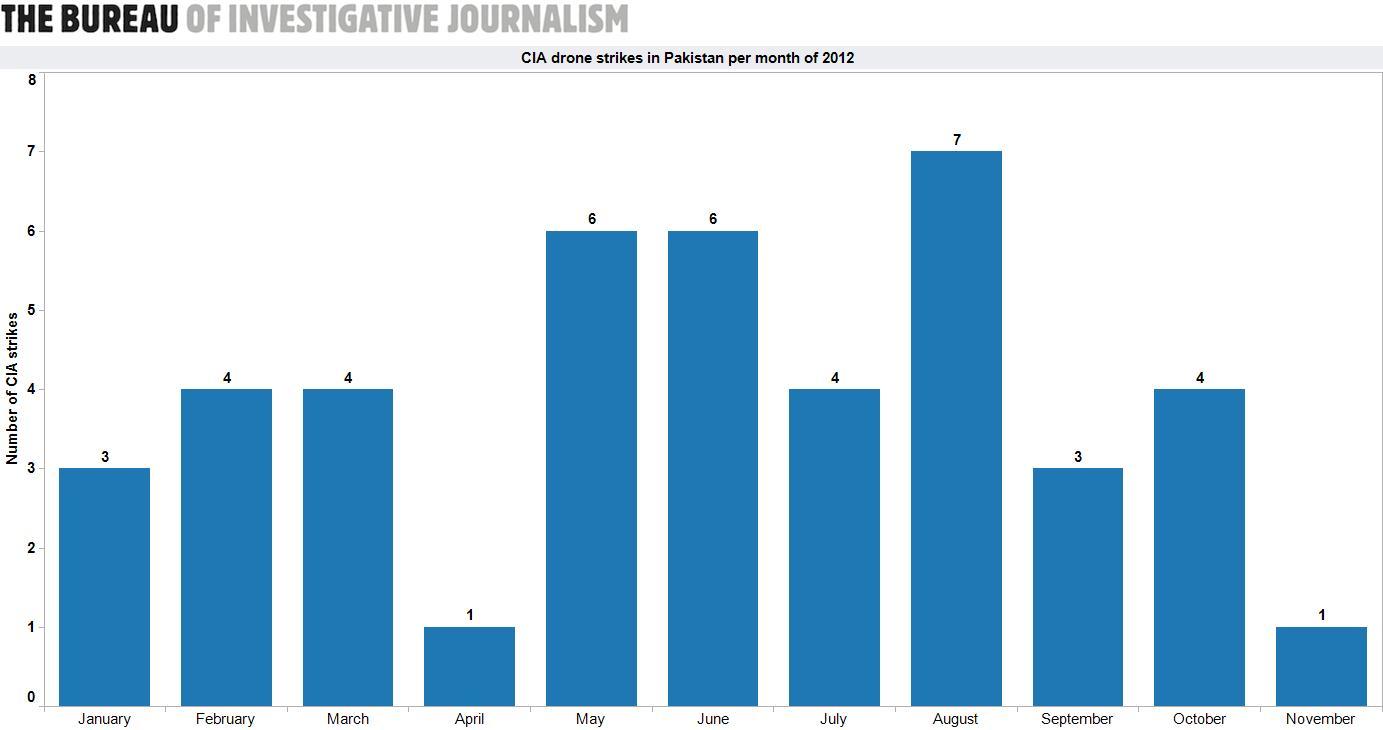 In November CIA drone strikes in Pakistan dropped to their lowest since April as the Agency paused operations for 36 days.

The break in drone operations also followed a controversial strike on October 24. Mamana Khan, a 67-year-old woman, was one of up to five killed. Her six grandchildren were reported injured in the strike.

The pause was not for a lack of targets, according to a US intelligence official. ‘Pakistan is a target-rich environment,’ the official told the Long War Journal. ‘We’re only scratching at the surface, hitting them in the tribal areas, while the country remains infested with al Qaeda and their allies.’

The November 29 strike hit its target 20km outside Wana, capital of South Waziristan, where a few hours earlier Taliban commander Maulvi Nazir was injured by a suicide bomber. It was the first drone strike in South Waziristan since June 3.

Total reported killed in US operations: 0-3

A possible US drone strike killed up to three people driving through Beit al Ahan, ousted President Ali Abdullah Saleh’s home town. However allegations that the targets were militants are disputed.

On November 7 an explosion targeted Adnan al Qathi, a colonel in the Yemen Army and a relative of prominent general Ali Mohsen al Ahmar. It destroyed al Qathi’s vehicle less than 24 hours after President Obama’s re-election.

While al Qathi’s family acknowledges he supported al Qaeda’s cause, they dispute claims he was a militant. Yemeni journalist and analyst Abdulrazzaq Jamal told McClatchy Newspapers: ‘There were connections [with al Qaeda], but there wasn’t perceptible tangible support.’

Al Qathi had been arrested once before, in 2008 after an attack on the US embassy in Sanaa. And as he lived in the ‘hometown of much of the top leadership of the Yemeni armed forces,’ according to analyst Abdulghani al Iryani ‘it is nearly inconceivable to imagine that he could not have been taken into custody alive.’

Also in November, the Saudi Arabian assistant military attache was gunned down while driving through Sanaa’s diplomatic quarter. He was assassinated by gunmen dressed in Yemen security service uniforms. It is the latest in a series of high-profile assassinations on the streets of the capital.

Once again no US operations were recorded in Somalia in October, as al Shabaab continue to exercise control in rural parts of the country.

The militant group is reportedly moving away from its bases in the south and centre of the country and shifting further north, according to the president of Puntland, the autonomous northern region. While African Union peacekeepers (Amisom) have forced al Shabaab out of the cities the group remains a threat. The group has launched bomb attacks on targets in Mogadishu and Nairobi.

In related news, the UN Security Council extended Amisom’s mandate to March 7 2013. However the future of the multilateral force is in doubt after Uganda threatened to withdraw its contingent of soldiers. Kamapala is the largest troop contributor to Amisom and issued the threat after a UN report alleged the Ugandan government is arming the M23 rebel group in the Democratic Republic of Congo.