Barack Obama has made it clear that the US will continue with its controversial targeted killing programme.

In a major speech the US president also announced that he has signed into force a new – and secret – rule book for lethal action that provides ‘clear guidelines, oversight and accountability’ for covert drone strikes.

Counter-terrorism officials indicated that control of covert drone strikes will progressively pass from the Central Intelligence Agency to the Pentagon.

The rules will also ‘impose the same standard for strikes on foreign enemies now used only for American citizens deemed to be terrorists’.

There was some dispute about whether the Presidential Policy Guidance would prevent much-criticised attacks on groups of men based on their patterns of behaviour – so-called ‘signature strikes.’ The New York Times insisted that this was the case. But other major US media were more cautious.

Impassioned defence
Speaking for an hour in front of an invited audience at the National Defense University in Washington DC, Obama made an impassioned defence of the US targeted killing programme, insisting that it was both effective and legal. But he admitted that this may not be enough:

‘To say a military tactic is legal, or even effective, is not to say it is wise or moral in every instance.  For the same human progress that gives us the technology to strike half a world away also demands the discipline to constrain that power — or risk abusing it,’ he said.

He addressed head-on controversies surrounding civilian casualties. Acknowledging that there was a ‘wide gap’ between US and non-governmental assessments, he bluntly conceded that civilians have died in US strikes. Obama said that for himself and ‘those in my chain of command, these deaths will haunt us as long as we live’.

He declared: ‘before any strike is taken, there must be near-certainty that no civilians will be killed or injured – the highest standard we can set.’

But he also insisted that civilian deaths were sometimes a necessary risk. ‘As Commander-in-Chief, I must weigh these heartbreaking tragedies against the alternatives. To do nothing in the face of terrorist networks would invite far more civilian casualties – not just in our cities at home and facilities abroad, but also in the very places –like Sana’a and Kabul and Mogadishu – where terrorists seek a foothold.’

These deaths will haunt us as long as we live.’
President Obama

Bureau estimates indicate that since 2002, at least 2,800 people have died in 420 covert drone strikes in Pakistan, Yemen and Somalia. Of those killed, more than 400 are likely to have been civilians.

Obama has so far carried out seven times more covert drone strikes than his predecessor, George W Bush. However, the number of reported strikes has declined steeply over the past year, along with reported civilian casualties.

‘Boots on the ground’

Insisting that his administration had ‘a strong preference for the detention and prosecution of terrorists’, Obama said there were occasions when only lethal drone strikes would suffice.

At times ‘putting US boots on the ground may trigger a major international crisis’ and inflame local civilian populations, he said. Suspects may also ‘hide in caves and walled compounds’ in areas where there was little or no governance.

But he acknowledged that the use of drones was not without constitutional risk: ‘The very precision of drones strikes, and the necessary secrecy involved in such actions can end up shielding our government from the public scrutiny that a troop deployment invites. It can also lead a President and his team to view drone strikes as a cure-all for terrorism.’

Before any strike is taken, there must be near-certainty that no civilians will be killed or injured – the highest standard we can set.
President Obama

President Obama announced that he would work with Congress towards greater oversight of the targeted killing campaign. And he said he would be seeking to ‘refine, and ultimately repeal’ the Authorization to Use Military Force (AUMF) passed by Congress in 2001, which the US asserts is the legal bedrock for its covert drone campaign.

Unlocking Guantanamo
The president also used the speech to challenge Congress to aid him in closing the detention facilities at Guantanamo Bay, calling on members to end the ban on detainee transfers to prisons on the US mainland. ‘I know the politics are hard. But history will cast a harsh judgment on this aspect of our fight against terrorism, and those of us who fail to end it,’ he said, adding that nobody had ever escaped a US supermax jail.

Obama announced the end of a moratorium on transferring detainees to Yemen: instead, transfers will be examined on a case-by-case basis. At least 84 current Guantanamo inmates are Yemeni.

The speech was repeatedly interrupted at one point by Code Pink protester Medea Benjamin. Obama was forced to pause and wait three times for Benjamin to finish comments including references to the death of Anwar al-Awlaki’s 16-year-old son in a drone strike in Yemen. As Benjamin was escorted out, he recovered his poise – joking that he was being forced to depart from his script, but saying she raised ‘tough issues’.

One of those named by the attorney general – Jude Kenan Mohammed – was until now only rumoured to have been killed. The New York Times reports that Mohammed died in a CIA attack in South Waziristan, Pakistan on November 16 2011. 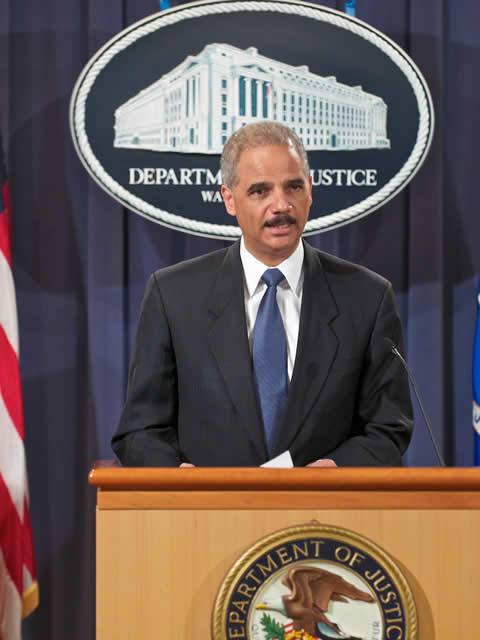 According to an open US indictment dated September 2009, Mohammed ‘departed the United States to travel to Pakistan to engage in violent jihad’. He was also accused of engaging in ‘planning and perpetrating a Federal crime of terrorism against the United States, citizens and residents of the United States, and their property.’

The other three US citizens named by Holder were radical cleric Anwar al-Awlaki and his 16 year old son Abdalrahman al-Awalaki; and Samir Khan, a propagandist for Al Qaeda in the Arabian Peninsula – all killed in Yemen in autumn 2011. According to the attorney general, only Anwar al Awlaki was ‘specifically targeted by the United States’.

In his speech, Obama insisted that it was right to target and kill Anwar al-Awlaki, stating that the citizenship of such an alleged threat ‘should no more serve as a shield than a sniper shooting down on an innocent crowd should be protected from a Swat team.’

At least three additional US citizens have been killed in US drone attacks. In the first ever drone strike outside a battlefield, US citizen Kamal Darwish was among six men killed by the CIA in Yemen in 2002. The Bush administration insisted at the time that the intended targets were alleged al Qaeda suspects accompanying Darwish in the vehicle.

And veteran Washington reporter Bob Woodward has revealed that on November 7 2008, ‘many Westerners, including some US passport holders’ died in an attack near Miranshah in North Waziristan.

As Woodward noted in his book Obama’s Wars, in a subsequent meeting with Pakistan’s President Zardari ‘The CIA would not reveal the particulars due to the implications under American law. A top secret CIA map detailing the attacks had been given to the Pakistanis. Missing from it was the alarming fact about the American deaths … The CIA was not going to elaborate.’

Addressing the fact that three of the four US citizens named by Holder were not the intended targets, New York University law professor Sarah Knuckey told the Bureau: ‘Does it mean that the three were killed as intentional but lawful collateral damage in a strike on some other legitimate target? Or that they were accidental collateral? Or does it mean that they were killed in signature strikes?  We just don’t know what it is intended to mean. In a letter that touts throughout the government’s commitment to transparency and “unprecedented disclosure”, the government has introduced new vague language, and thus new concerns about its targeting policies and practices.’

This article was amended on May 24 to take note of ambiguities regarding the possible abandonment of ‘signature strikes.’