October 2012 update: US covert actions in Pakistan, Yemen and Somalia

A new squadron of armed Reapers will soon be remotely operated from the UK (Photo: RAF)

Yemen: Thirteen named militants are among those killed in Yemen, with US operations continuing below their May 2012 peak.

Somalia: No US drone strikes are again reported from Somalia, as an investigation reveals that armed US drones routinely deploy over the country.

Total killed in strikes in October: 24-41, of whom 1 was reportedly a civilian.

The CIA launched four strikes this month, one more than September. Drone attacks reportedly killed 24 to 41 people in October, at least double the tally of the previous month.

Between 16 and 26 people were killed in a single event, making it one of the deadliest strikes of the year. CIA drones hit a madrassa belonging to Maulvi Shakirullah, allegedly connected to the Haqqani Network. 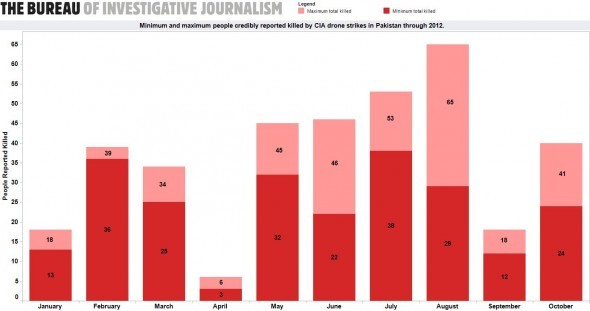 This Bureau graph of minimum and maximum casualties from CIA drone strikes in Pakistan shows it is still difficult to pin down precise figures.

Some media reports located this strike in Orakzai province in northern FATA. If true it would be only the second strike recorded by the Bureau in that province. And it would be the first CIA strike outside North Waziristan since March 2012 (Ob264).

The fourth strike of the month on October 24 was widely reported to have killed the wife of a retired teacher in the village of Tappi, North Waziristan. According to reports Reshmeen Khan’s wife died and eight of her grandchildren, aged between 4 and 18, were critically burned. The drones also reportedly destroyed a house and car in the attack.

On October 15 a militant website announced the earlier death of Moezeddine Garsallaoui, said to be the Belgian-Tunisian (or Swiss-Tunisian) leader of Islamist group Jund al Khilafah. Few details of his death in an unspecified ‘strike’ were released and it is unclear if he was killed in a drone strike. Jund al Kilafah claimed responsibility for the Toulouse shootings in March 2012 that killed a rabbi and three children.

Of which possible additional US drone strikes: 66-80

Thirteen named militants were reportedly killed in four possible drone strikes this month. Seven perished in an airstrike on October 18 (YEM117), as they were said to be preparing an attack on Jaar.

The strike continued through October at the significantly lower level recorded since their May 2012 peak. Although four possible strikes were noted, no senior US or Yemeni officials confirmed US involvement, the first time since November 2011 that officials have shown such reticence.

October also saw the first US strike in Saada since January 2010 (YEM006). A suspected drone killed at least three alleged militants from al Qaeda in the Arabian Peninsula (AQAP). However the northern province is dominated by a group of Shia secessionists, the Houthi. In December 2011 AQAP’s Mufti labeled the Shia a ‘virus’ on the Sunni people, and the group declared war on the Houthi.

The highest value target recently reported killed in Yemen was Said al Shehri on September 10 (YEM114). But on October 4 a recording surfaced purportedly of al Shehri, AQAP’s second-in-command, denying reports that he died in a strike. Articles in Yemeni and UK media had already cast doubt on his death.

Once again no US drone strikes were reported from Somalia this month. However an extensive investigation by the Washington Post revealed that armed drones routinely deploy over Somalia from the US base at Camp Lemonnier, Djibouti.

The paper also revealed that drones can be over Somalia within minutes and are coordinated from Lemonnier by a 300-strong contingent of US Special Operations commandos.

US operations in Somalia remain secret, and there are still no trustworthy reports of strikes or casualties. Only Iranian broadcaster Press TV consistently reports alleged US strikes. But while the Bureau continues to monitor Press TV’s coverage we do not consider these reports reliable, and do not count them in our data.

Reporting accurately from Somalia remains an extremely dangerous job. This year seventeen journalists have been ‘killed with complete impunity in Somalia’, according to monitoring group Reporters Without Borders.

Other notable news for October
The UN is to set up a special unit to investigate reports of civilian deaths in US covert drone strikes. Announcing the Geneva-based unit, Ben Emmerson QC said the Bureau’s reports of deliberate strikes on funerals and on rescuers could be considered ‘war crimes’.

In the UK a series of developments hinted at growing concern over covert drone strikes. Politicians from across the main parties launched a parliamentary focus group on drones, led by high-profile MPs Tom Watson and Zac Goldsmith, to examine military and civilian uses of drones. This coincided with the RAF inaugurating its new Reaper squadron, which will pilot the drones from the UK for the first time.

British courts also saw their first major legal challenge to the CIA’s drone campaign as Noor Khan, whose father died in a drone strike, applied for a judicial review. Khan is calling for an end to a reported policy of British spies sharing information with the CIA that leads to drone strikes. No decision has yet been reached on whether a review will proceed.

And relatives of Rashid Rauf, a British citizen killed in a drone strike, announced plans to sue the UK government for providing the CIA with information that helped them kill him.

Internationally, academics at Columbia Law School examined the Bureau’s data on drone deaths alongside that of the New America Foundation and the Long War Journal, and the available reporting of drone strikes in 2011. The study concluded that the Bureau’s data was the most reliable public count of civilian casualties, but called on the US government to release its own figures.

The Columbia report follows a similar study from Stanford and New York universities in September which also deemed the Bureau’s data the most accurate publicly available.