Press TV alleged that 749 Somalis were killed in US drone attacks in November alone.

Earlier this month the Bureau published an investigation into how alleged US drone strikes in Somalia were being reported by Iranian broadcaster Press TV.

In 56 reports between July and December this year, the station claimed that at least 1,370 people had been killed by US drone strikes. The state-backed station alleged that, in November alone, 749 Somalis were killed in 28 alleged US drone attacks, and at least 643 people were injured.

Now, the Bureau can reveal that since our report was published on the evening of December 2, 2011, Press TV appears to have ceased reporting drone strikes in Somalia altogether.

Research by the Bureau, published in the Guardian, found no independent evidence to verify the reports, with a senior UN official commenting:

‘Press TV is not a reliable source. It exaggerates and openly fabricates reports.’

Since the investigation was published 12 days ago, Press TV have not released a single report alleging a US drone strike in Somalia – contrasting hugely with the ‘coverage’ before Bureau publication.

In addition, the station seems to have retreated from its earlier claims of ‘hundreds’ of civilian fatalities. A Press TV article on December 5 stated that only ‘several’ civilians had been killed by US drone strikes in Somalia.

The article has now been revised to read: ‘Washington claims the airstrikes target militants, though civilians constitute the majority of the victims of such attacks.’

However, Mr Barvasad, a senior Producer at Press TV’s Iranian headquarters who heads the Somalia newsroom, denied that the discontinuation of the channel’s questionable reporting has any connection with the Bureau’s investigation.

‘I think it’s a coincidence that there are no reports over the past 12 days. The reporters haven’t been sending us any reports about attacks,’ he maintained.

The graph below shows Press TV’s reporting of US drone ‘fatalities’, and alleged numbers of people injured, in Somalia over the last 28 days.

The data shows a clear drop-off on the date of publication – this could be coincidental, as Press TV insists, or the two could be linked. 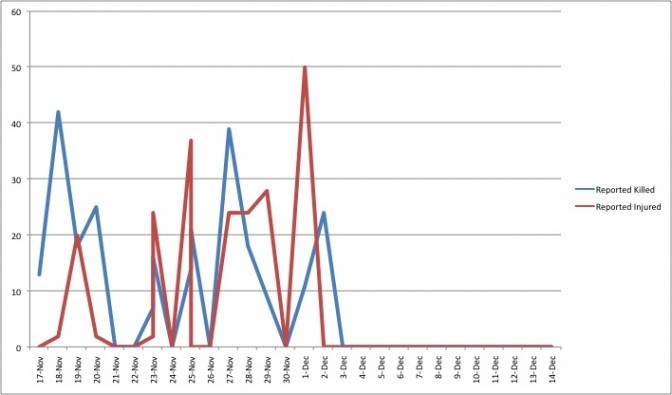