A major new study by Amnesty International and Airwars has concluded that at least 1,600 civilians died in Coalition strikes on the city of Raqqa in 2017 during the battle to evict so-called Islamic State – ten times the number of fatalities so far conceded by the US-led alliance, which had admitted 159 deaths to April 24th.

The two organisations are calling on the US and its British and French allies to properly investigate all reports of civilian harm at Raqqa; to be transparent about their tactics, methods of attack, choice of targets, and precautions taken in the planning and execution of their strikes; and to create a fund to ensure that victims and their families receive full reparation and compensation.

The major project – which saw Amnesty field researchers on the ground for almost two months in Raqqa – is featured in a new interactive website, Rhetoric versus Reality: How the ‘most precise air campaign in history’ left Raqqa the most destroyed city in modern times, which is described by Amnesty as ‘the most comprehensive investigation into civilian deaths in a modern conflict.’

“Thousands of civilians were killed or injured in the US-led Coalition’s offensive to rid Raqqa of IS, whose snipers and mines had turned the city into a death trap. Many of the air bombardments were inaccurate and tens of thousands of artillery strikes were indiscriminate, so it is no surprise they killed and injured many hundreds of civilians,” says Donatella Rovera, Senior Crisis Response Adviser at Amnesty International.

“Coalition forces razed Raqqa, but they cannot erase the truth. Amnesty International and Airwars call upon the Coalition forces to end their denial about the shocking scale of civilian deaths and destruction caused by their offensive in Raqqa.” 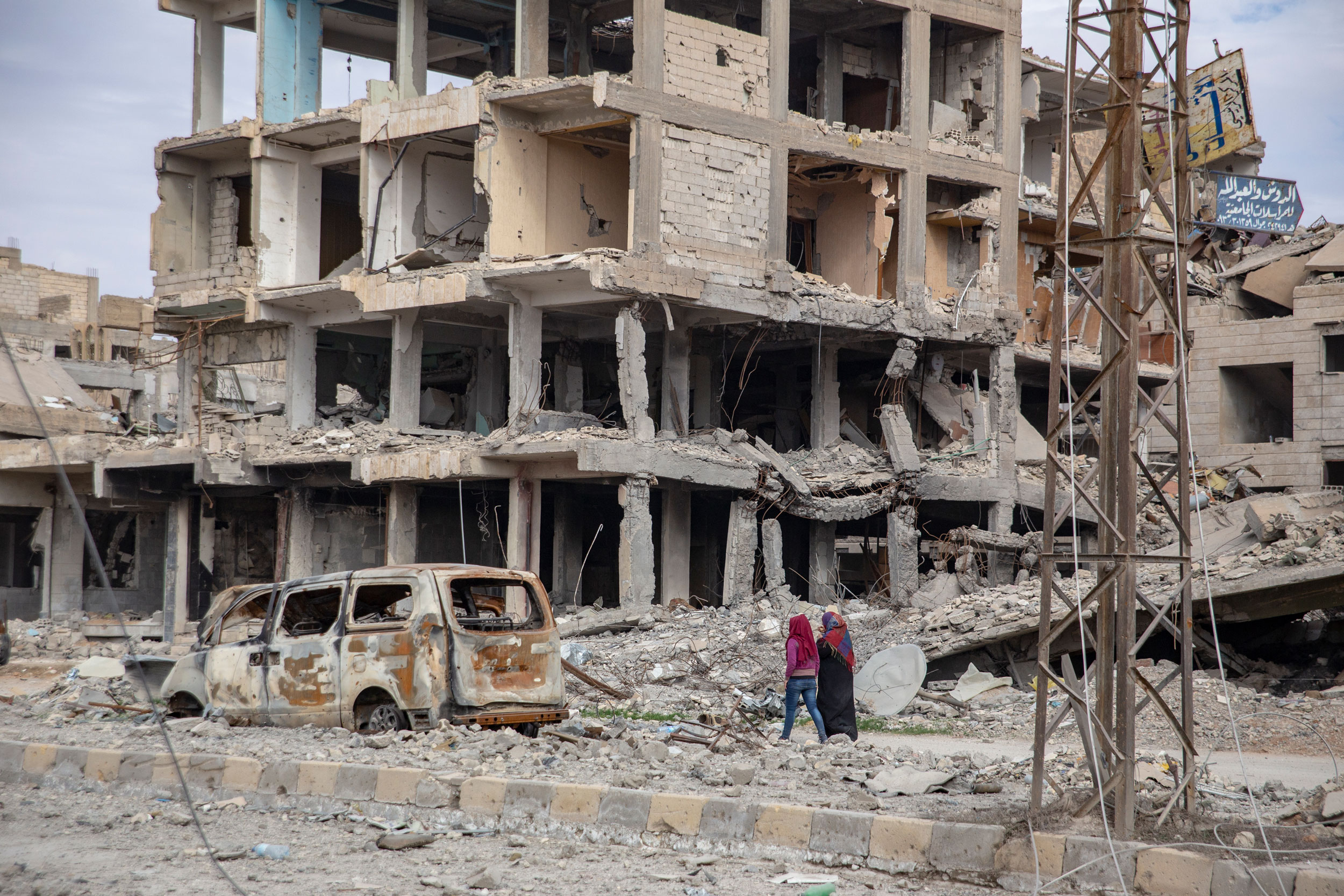 Almost 500 alleged Coalition harm events have so far been identified by Amnesty and Airwars researchers during the battle for Raqqa, in which more than 3,000 civilians were locally alleged killed.

On four site visits to the broken city, Amnesty researchers spent a total of around two months on the ground, carrying out site investigations at more than 200 strike locations and interviewing more than 400 witnesses and survivors.

Amnesty International’s innovative Strike Trackers project also identified when each of more than 11,000 destroyed buildings in Raqqa was hit. More than 3,000 digital activists in 124 countries took part, analysing a total of more than two million satellite image frames. The organisation’s Digital Verification Corps, based at six universities around the world, also analysed and authenticated video footage captured during the battle.

Airwars researchers had independently tracked 429 locally alleged civilian harm events during the battle for Raqqa, and this comprehensive dataset also formed a key part of the study.

Three Airwars team members were seconded to the Raqqa project, where they worked alongside Amnesty researchers to analyse open-source evidence – including thousands of social media posts and other material – and to build a database of more than 1,600 civilians credibly reported killed in Coalition strikes.

The organisations also gathered names for more than 1,000 of the victims. Amnesty International has directly verified 641 of those names on the ground in Raqqa, while there are very strong multiple source reports for the rest.

Shihab Halep from the Airwars Syria team helped build the database of victim names for Raqqa. “We were able to document at least 1,000 civilians killed by the Coalition and its proxies on the ground. The international community needs to find a way to hold Coalition forces accountable for their actions, to ensure that the same will not be committed in the future and to bring justice for these innocent victims and for their families,” he says.

Hanna Rullmann and Sophie Dyer worked with Amnesty to incorporate Airwars’ own findings into the study – along with the organisation’s engagements with the Coalition on hundreds of reported casualty events: “Bringing together Airwars’ vast remote monitoring data with Amnesty’s field investigations was a huge undertaking. Victim names became invaluable in matching the different research threads. The result is a comprehensive and undeniable picture of massive civilian loss of life throughout the battle,” says Sophie. 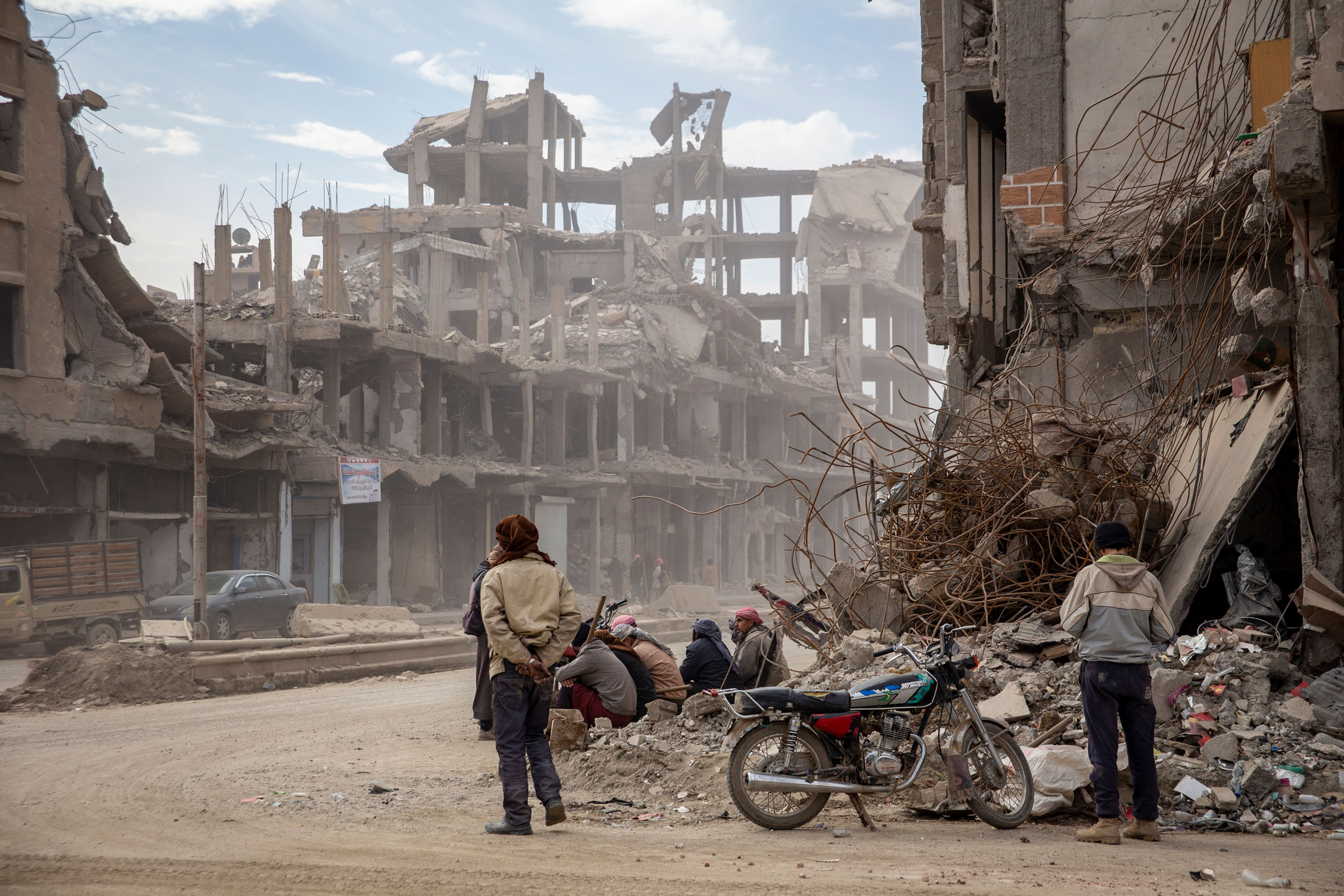 Men wait by the side of the road for casual labour in Raqqa. Many end up clearing partially destroyed or damaged buildings, a very risky endeavour as many building were mined by ISIS and civilians are frequently killed and injured by mines. (Image courtesy of Amnesty International)

By the time the offensive to capture Raqqa began in June 2017, ISIS had ruled the city for almost four years. Previous investigations by Amnesty and others detailed how the terror group had perpetrated war crimes and crimes against humanity, torturing or killing anyone who dared oppose it.

However as the new study reports, most of the destruction during the battle for Raqqa was caused by incoming Coalition air and artillery strikes – with at least 21,000 munitions fired into the city over a four month period. The United Nations would later declare it the most destroyed city in Syria, with an estimated 70% laid waste.

Both Amnesty and Airwars have frequently shared their findings on civilian harm at Raqqa with the US-led alliance. As a result, the Coalition has so far admitted responsibility for killing 159 civilians – around 10% of the minimum likely toll, according to the new study.

The Coalition has routinely dismissed the remainder of reported deaths as “non-credible.” Yet to date the alliance has failed to adequately probe civilian casualty reports, or to interview witnesses and survivors – admitting that it does not carry out site investigations.

“The Coalition needs to fully investigate what went wrong at Raqqa and learn from those lessons, to prevent inflicting such tremendous suffering on civilians caught in future military operations,” says Chris Woods, Director of Airwars. 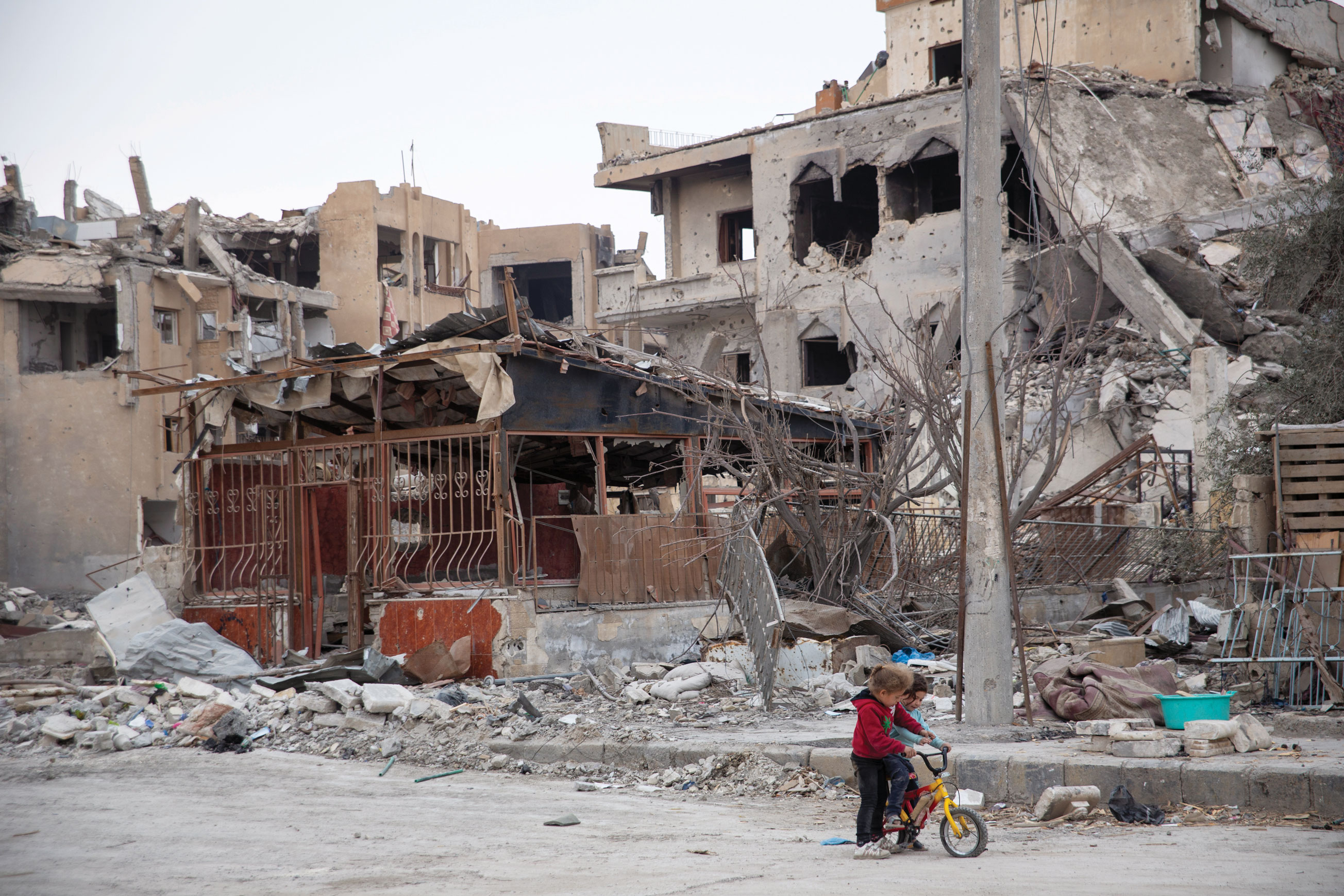 Rhetoric versus Reality brings to life the stories of families who lived and died by taking users on a journey through Raqqa: meeting survivors, hearing their testimonies and visiting their destroyed homes. From the bombed-out bridges spanning the Euphrates to the largely demolished old city near the central stadium, no neighbourhood was spared.

Developed with Holoscribe’s creative team, the interactive website combines photographs, videos, 360-degree immersive experiences, satellite imagery, maps and data visualisations to highlight the cases and journeys of civilians caught under the Coalition’s bombardment. Users can also explore data on civilians who were killed, many of them after having fled from place to place across the city.

One of the first neighbourhoods to be targeted was Dara’iya, a low-rise, poorer district in western Raqqa.

In a ramshackle, half-destroyed house, Fatima, nine years old at the time, described how she lost three of her siblings and her mother, Aziza, when the Coalition rained volleys of artillery shells down on their neighbourhood on the morning of June 10th 2017. They were among 16 civilians killed on that street on that day alone. Fatima lost her right leg and her left leg was badly injured. She now uses a wheelchair donated by an NGO to get around and her only wish is to go to school.

In December 2017 the Coalition dismissed the event as ‘non credible’ – claiming that “there is insufficient evidence to find that civilians were harmed in this strike.”

In another tragic incident, a Coalition air strike destroyed an entire five-storey residential building near Maari school in the central Harat al-Badu neighbourhood in the early evening of September 25th 2017. Four families were sheltering in the basement at the time. Almost all of them – at least 32 civilians, including 20 children – were killed. Again, the Coalition would later dismiss the event as ‘non credible.

“Planes were bombing and rockets were falling 24 hours a day, and there were IS snipers everywhere. You just couldn’t breathe,” one survivor of the September 25th strike, Ayat Mohammed Jasem, told a TV crew when she returned to her destroyed home more than a year later.

“I saw my son die, burnt in the rubble in front of me. I’ve lost everyone who was dear to me. My four children, my husband, my mother, my sister, my whole family. Wasn’t the goal to free the civilians? They were supposed to save us, to save our children.” 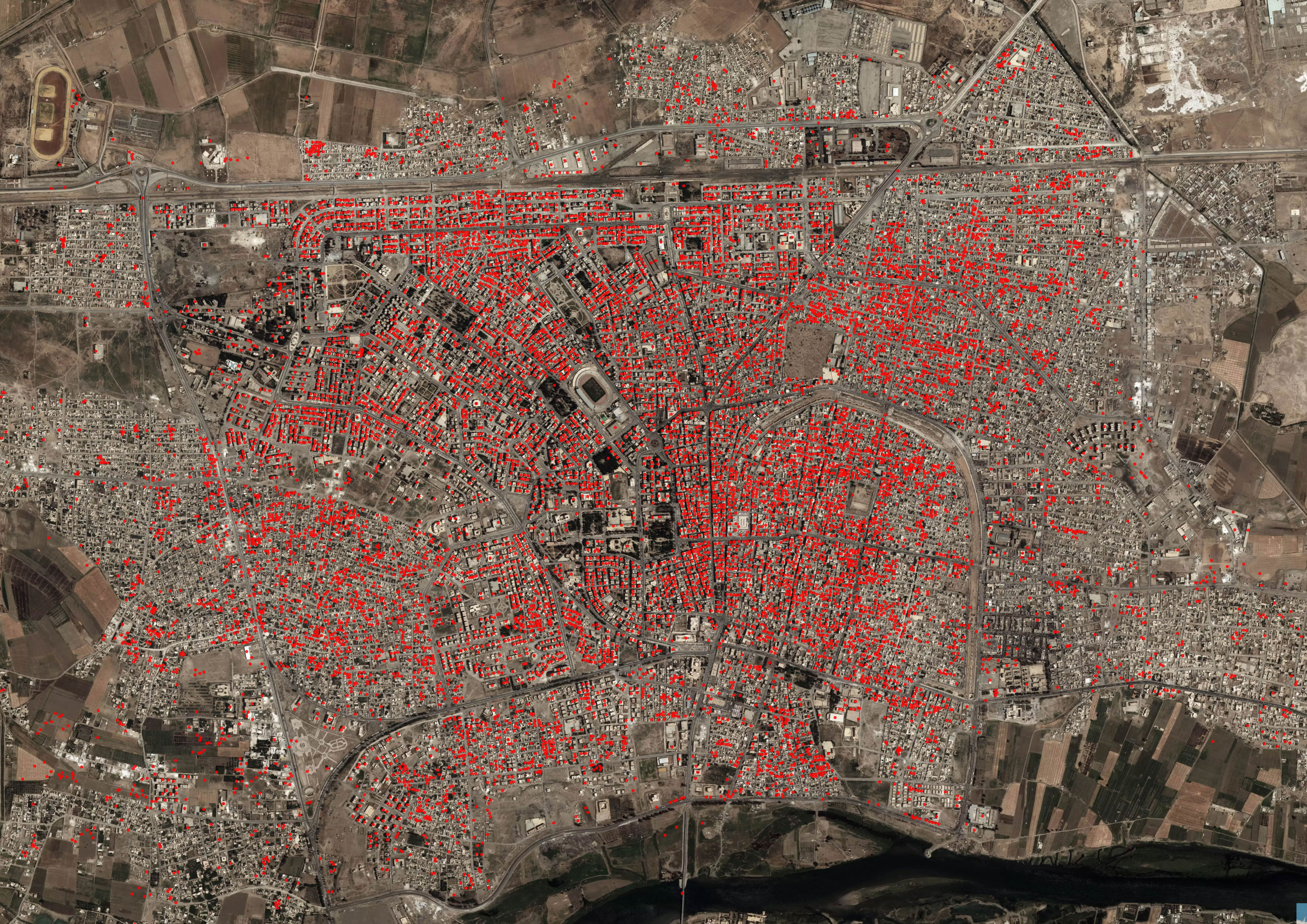 More than 11,000 buildings were destroyed or damaged during the US-led battle to capture Raqqa from ISIS, analysts from Amnesty found.

Many of the cases documented for the project likely amount to violations of international humanitarian law and warrant further investigation, says Amnesty. Despite their own best efforts, NGOs like Amnesty and Airwars will never have the resources to investigate the full extent of civilian deaths and injuries in Raqqa.

A spokesperson for the Coalition told Airwars that the alliance takes all allegations of civilian harm seriously: “The current number for completed investigations of civilian casualties between June-October 2017 is 180. Of note, there are still open allegations under investigation. Amnesty International provided us with 86 new allegations, 43 of which had already been assessed as credible and previously reported or were deemed not credible because the allegation did not corroborate with our strike records. We requested that Amnesty International provide us with additional information on the remaining 43 allegations if they have it so that we would be able to determine whether we could conduct an investigation.”

The spokesperson added that “We are willing to work with anyone making allegations or providing new, credible information. We continue to be open and transparent about our strikes and civilian casualty reports, which are posted and can be checked online.”

▲ Mr. Maarbalati sells items out of the back of his bicycle for work. Mr. Maarbalati’s wife, Kafa Hassen, died in an airstrike in Harat al-Badu neighborhood of Raqqa during the four month military campaign to oust the Islamic State from the city. (Andrea DiCenzo/Panos)