Drone strikes restart in Pakistan after a pause of almost six months.

US drone strike casualty rate in Yemen jumps to 8.3 people killed in each attack on average.

CIA drone strikes in Pakistan‘s tribal area resumed on June 11 with an attack that killed at least four people. The first attack since December 25 2013, this brought to an end the longest pause in drone strikes of Obama’s presidency.

Within hours drones attacked again, killing 6-10 people shortly after midnight on June 12. Some reports said this was a follow-up strike on the same site that targeted rescuers. A third attack killed at least four more people on June 18.

After the first strike, the Foreign Ministry issued a statement condemning the violation of its sovereignty. However, a senior Pakistani official told Reuters: ‘The attacks were launched with the express approval of the Pakistan government and army.’

During the almost six-month hiatus in strikes, the Pakistani government held peace talks with the Pakistan Taliban (TTP), an armed group based in the tribal agency of North Waziristan. These were interrupted by terrorist attacks and retaliatory Pakistan Air Force strikes on the tribal regions. A Bureau investigation found that 15 Pakistani air strikes between December and June 15 reportedly killed 291-540 people, including 16-112 civilians.

The peace talks conclusively ended after a June 8 attack in which gunmen and suicide bombers stormed Karachi airport. At least 34 people were killed in the ensuing gun battle, including 10 attackers. The TTP and Islamic Movement of Uzbekistan (IMU), also based in North Waziristan, claimed responsibility.

On June 15, the Pakistani government announced a long-awaited military offensive against the TTP in North Waziristan.

More than 450,000 people have fled their homes in North Waziristan since late May. On June 19 the Pakistan government said it would not ask aid agencies, including the UN, for help handling the refugee crisis. A week later the World Health Organisation warned the mass exodus risked increasing the spread of polio beyond the tribal belt – currently Pakistan’s worst affected area.

June 17 marked the tenth anniversary of the first drone strike in Pakistan. In June 2004, CIA drones killed Nek Mohammed and at least five others, including two children. On the anniversary, the Bureau published an interactive timeline of key milestones in the campaign, and eyewitness accounts of this strike. One local told the Bureau he heard a buzzing: ‘There was some noise then from the east, a flash of light came. There was a big blast.’

Also in June, a task force of legal experts, retired military and national security officials convened by the Stimson Center, a Washington-based think-tank, published a year-long analysis of the US use of armed drones for targeted killing.

The report called for more transparency over drone strikes and voiced concerns that the Obama administration’s ‘heavy reliance on targeted killings as a pillar of US counter-terrorism strategy … risks increasing instability and escalating conflicts.’ The authors also concluded drones do not ’cause disproportionate civilian casualties or turn killing into a “video-game”.’

The absence of reported drone strikes in the first five months of 2014 led some to question whether the campaign in Pakistan had ended entirely.

Several factors may have contributed to the lengthy hiatus. The Pakistani government spent the first half of the year in often fractious peace negotiations with the TTP. A source close to the talks told the Bureau that Islamabad had asked the US to stop drone strikes during the process. All hope of the talks succeeding ended with the TTP’s joint attack on Karachi airport on June 8; drone strikes returned days later.

Drones reportedly continued flying over the tribal regions, and US officials said the administration reserved the right to use lethal force if a target presented itself. It is possible the CIA may have decided to pursue a more limited list of targets.

The campaign may have been affected by the scaling-down of the US intelligence network over the border in Afghanistan. CIA border posts and listening stations are closing ahead of the drawdown and AP reported the CIA is ending payments to its proxy militias in the region, which gather human intelligence on targets in Pakistan.

The strikes may also have been constrained by secret negotiations leading up to the May 31 release of Sergeant Bowe Bergdahl, the last US prisoner of war. He was exchanged for five members of the Afghan Taliban held in Guantanamo. Bergdahl had been held prisoner in Pakistan’s tribal areas by the Haqqani Network, members of which were the target of at least one of June’s three strikes.

The year’s three strikes so far killed 14-24 people, none of whom were described as civilians. This is the smallest reported death toll for a six-month period of drone strikes in Pakistan since the first half of 2006, when 13-22 people reportedly died. 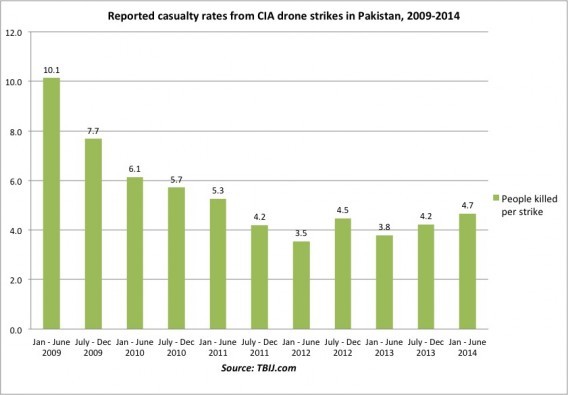 The average number of people killed in CIA drone strikes in Pakistan during Obama’s presidency.

Total reported killed in US operations: 5-10

June saw one confirmed drone strike in Yemen, killing 5-6 people, and two further attacks that may have been drone strikes. One of these possible strikes, on June 4, killed 3-4 people. Casualties were unknown in the other.

Only two of the dead were identified, both described as members of al Qaeda in the Arabian Peninsula (AQAP). ‘Tribal sources‘ told reporters that the June 4 strike killed Jafar al Shabwani, describing him as a mid-level AQAP commander. He was the fourth man with this name to have reportedly died in a drone strike this year, but their relation to each other is unclear.

The US added alleged AQAP member Shawqi Ali Ahmed al Badani to a US sanctions list. According to unnamed officials, al Badani was the target of a disastrous US drone strike on a wedding procession in December 2013.

On June 23 the US government released, with redactions, a secret memo setting out legal justifications for killing a US citizen, Anwar al Awlaki. The release met with mixed reactions from national security analysts and legal experts.

June also saw the Islamic State of Iraq and al Sham (ISIS) overrun major cities in Iraq. So far Washington has refused Baghdad’s requests for airstrikes on ISIS fighters, but has started flying armed drones over the country. And there are now more than 180 US special forces in the country.

While more people died overall in January to June 2012, this year’s drone strikes have had higher death tolls. The casualty rate for the past six months was 8.3 people killed per strike – the highest yet recorded in Yemen, and almost double that recorded in the second half of last year. 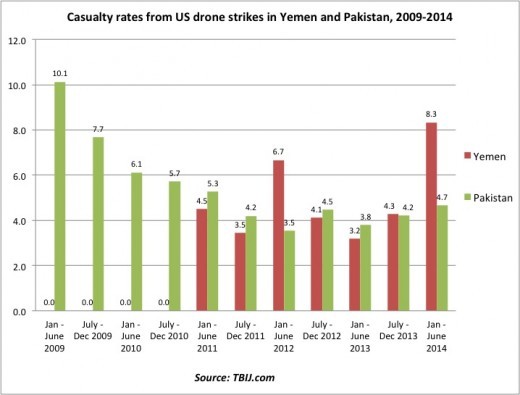 The average number of people killed per US drone strike in Yemen and Pakistan during Obama’s presidency.

The increased casualty rate this year is because a cluster of attacks on April 19 and April 20 killed at least 37 people.

The civilian casualty rate – the number of civilians killed in each strike on average – fell sharply compared to the previous six months but continued a longer-term upwards trend. 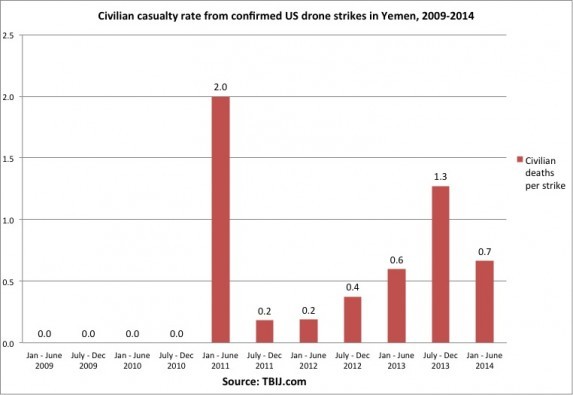 The minimum number of civilians reportedly killed by US drones in Yemen during Obama’s presidency.

The high rate in the second half of last year is in large part because at least eight civilians were killed in the catastrophic wedding party strike on December 12 2013 strike. However, the civilian casualty rate in the first half of this year is more than three times that of the same period in 2012.

This could be due to improved reporting: journalists have, until recently, enjoyed better access to parts of the country than they did in 2011 and 2012, when the areas affected by drone strikes were often under AQAP control.

However journalists’ ability to report is now being restricted by the Yemeni government. Journalists have repeatedly been harassed by the security forces, and the government has closed media groups owned by the former president, Ali Abdullah Saleh. US journalist Adam Baron was expelled from the country, and UK reporter Iona Craig left shortly afterwards. They were the last accredited international journalists living and working in Sanaa.

There were no reported US operations in Somalia for the fifth successive month. However al Shabaab sites came under attack from Kenyan Defence Force jets. Military sources claimed up to 80 alleged militants died, though there were no independent casualty estimates.

The strikes were reportedly in support of the African Union peacekeeping mission, Amisom, which has been trying to roll back al Shabaab control in southern and central Somalia. Amisom has had some success against al Shabaab but a report by the International Crisis Group predicted it will be a long war against the armed group.

Al Shabaab killed at least 48 people in a bloodthirsty attack on people watching the World Cup in Mpeketoni, a poor Kenyan coastal town. Scores of al Shabaab fighters poured into the town after dark, targeting a police station and hotels, reportedly killing men with guns and knives but sparing women and children. Mpeketoni is near the popular tourist destination Lamu. The continuing attacks are harming Kenya’s crucial tourist industry,

The attack echoed a 2010 al Shabaab bombing in Kampala, Uganda, which also targeted crowds watching the World Cup. In that attack more than 70 died.

A single drone strike this year killed 2-9 people on January 26. It reportedly targeted Ahmed Abdi Godane, al Shabaab’s leader. It later emerged one of Godane’s aides, Sahal Iskudhuq, was killed in the attack. Godane had reportedly met with Iskudhuq that evening.

There have been between five and eight US drone strikes reported in Somalia since the first one in June 2011, a small number compared with Yemen and Pakistan. However, because much of the country remains beyond government control and out of reach for journalists and civil society, it is possible further attacks have gone unreported.

This year Amisom announced Ethiopia would contribute soldiers to the peacekeeping force. Ethiopia unilaterally invaded Somalia in December 2006 and its occupation was marked by accusations of war crimes.

Amisom have made territorial gains against al Shabaab, but the armed group has continued to launch lethal attacks in the heavily defended green zone around Mogadishu’s airport and the presidential palace.

This month the Bureau has added 14 names to Naming the Dead project, which identifies those killed in Pakistan drone strikes, taking the number of names published to 698.

These people were killed in June’s second strike. This poses a puzzle: there were only 6-10 people reportedly killed by the strike. However it was just hours after the earlier attack, so some of those 14 names could have belonged to those killed in that strike. Alternatively, the extra names could be pseudonyms or aliases.

The Bureau has profiled Nek Mohammed, the local Taliban commander who was the target of the first CIA drone strike in Pakistan, 10 years ago this month.