In May, President Obama admitted for the first time US drones have caused civilian casualties in the covert drone war (Image: Peter Souza/White House).

Bureau data suggests the CIA is killing fewer people in each strike in Pakistan.

Lack of official transparency means it remains unclear who is carrying out strikes in Yemen.

No reports of US operations in Somalia but al Shabaab continues to launch attacks.

Total killed in US strikes in June: 7-9, of whom 0 were reportedly civilians

A single CIA drone strike hit Pakistan in June. The attack, on June 7, killed seven including Mutaqi (aka Bahadar Khan), described by some sources as a ‘key Pakistan Taliban commander’.

The attack came two days after new prime minister Nawaz Sharif used his inaugural address to demand an end to US drone strikes. After the attack, the Ministry of Foreign Affairs summoned deputy US ambassador Richard Hoagland to protest.

Tensions in the region continue to grow after the killing of Pakistan Taliban (TTP) deputy leader Wali Ur Rehman in a drone attack in May hardened the stance of the militant group. Rehman’s death dashed hopes of peace talks between the militant group and Pakistan authorities in Islamabad. The TTP has since claimed that a spate of bloody attacks were in retaliation for Rehman’s death, including the murder of ten climbers and their guide in the mountainous north of the country.

While peace negotiations have faltered in Pakistan, across the border the US is trying to negotiate peace talks with the Afghan Taliban. The militant group opened its political office in Qatar – a move that provoked a visceral response from the Afghan government.

Six-monthly trends
Much has been written about the steep decline in the number of US drone strikes in Pakistan: strikes are now at their lowest level since early 2008. The number of reported civilian deaths is also at an all-time low, a trend first high-lighted by the Bureau in 2012.

The average number of people being killed in each drone strike has fallen sharply too, an analysis of the Bureau’s data shows. An average of four people now die in each attack – just a third of the rate in the first six months of 2010.

Research by the Bureau and others indicates that some of the highest casualties in the US drone war occur when the CIA carries out ‘signature strikes’ – attacks on groups of men judged to be behaving in a suspicious manner. 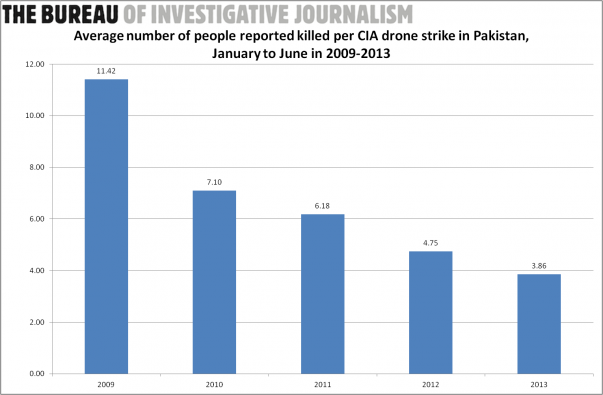 The rate CIA drones kill people per strike has continued to fall since the first half of 2009.

The smaller death tolls seen in recent months suggest the CIA may be limiting its use of the controversial tactic.

The Bureau showed its analysis in the graph above to law professor Rosa Brooks who recently testified before a Senate committee on the constitutional and counterterrorism implications of the US drone wars. She said the White House’s use of drones has come under pressure and the drop in the casualty rate is ‘almost certainly an effort to respond to the criticisms’. However, she added, this is ‘the optimistic theory’. ‘The less optimistic theory would simply be they have started running out of targets.’

The first half of 2013 began with a flurry of strikes in January before the CIA scaled back operations. This coincided with a move by the White House to more transparency about the drone programme. In February new CIA director John Brennan discussed the Agency’s targeted killing programme with the US Senate during his confirmation hearing. And in May President Obama for the first time acknowledged US drone strikes have killed civilians, in a major foreign policy speech.

The past six months have been bookended with the death of two significant militant leaders. Maulvi Nazir, one of the most senior commanders of the so-called ‘Good Taliban’, was killed in January. And Wali Ur Rehman, deputy leader of the Pakistan Taliban (TTP) was killed in May.

In February a leak to NBC provided a summary of the secret legal justification that allows the US to kill its own citizens in drone strikes. In April another leak to the McClatchy news agency was reported as showing the that US is not clear who it has been killing in Pakistan. According to the leaked secret documents many killed by drones were merely classified as ‘unknown‘.

Total reported killed in US operations: 0-15

Civilians reported killed in US strikes: 0-1

All other US covert operations: 12-77

A 10-year-old boy reportedly died in a suspected US drone strike in June, alongside up to six alleged al Qaeda in the Arabian Peninsula (AQAP) militants. The boy, Abdulaziz, was the younger brother of alleged AQAP commander Hassan al-Saleh Huraydan – described as a key figure in enabling the movement of money and fighters from Saudi Arabia to Yemen. They were killed, reportedly along with Saudi nationals, in a vehicle as they travelled through the northern province of al Jawf on June 9.

The strike was the second of the month. The first hit Abyan province on June 1, killing alleged senior AQAP militant Awadh Ali Lakra and a second alleged militant, Lawar.

There was strong evidence to suggest both were drone strikes. Yemen Air Force commander Rashid al Janad said he was ‘unaware of any air strikes that have been launched’ by Yemeni planes. And June’s second attack targeted a moving vehicle which is potentially beyond the Yemen Air Force’s capability. However the Bureau could not confirm US involvement – or the use of drones – in either.

Six-monthly trends
The covert drone war has been openly discussed by senior figures in the US administration. So too has President Obama’s wish to become more transparent about the drone programme – an effort to ‘push back against a lot of these allegations that are not true‘. And Brennan hinted at giving the Pentagon control of drone strikes outside Pakistan during his Senate hearing. Some suggest this would make the programme more transparent because unlike CIA strikes, Pentagon drone strikes can be publicly acknowledged by the government.

Moving the programme to military control is not a guarantee of more transparency. Earlier this year the US military significantly reduced its openness about its use of drones in Afghanistan, reversing an earlier decision to regularly publish data about the use of drones. It had originally agreed to declassify the data following months of discussions with the Bureau, but reclassified the data, claiming attention had ‘disproportionately focused’ on drones.

In Yemen the Pentagon has also run a targeted killing programme for four years or more, and does not publish details of these operations.

So far this year the Bureau has recorded four confirmed US strikes on Yemen. However it is not clear who carried out up to 12 other reported strikes. In the first half of 2012 this pattern was more pronounced – the Bureau recorded at least 21 confirmed US drone strikes, but cannot confirm US involvement in 42 more reported attacks. 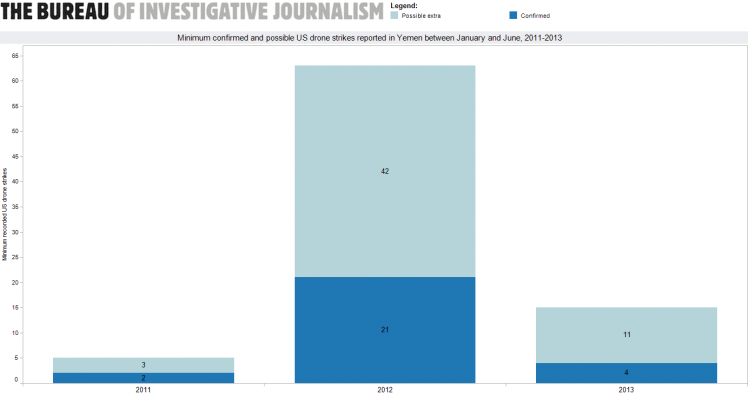 US involvement cannot be confirmed in the majority of reported drone strikes.

The Yemen government has claimed its airforce carried out many of the ‘other’ attacks. But the Yemen Air Force is incapable of flying missions at night, let alone carrying out precision strikes such as many of those reported in Yemen.

At least 183 people died in these unconfirmed drone attacks in the first half of 2012 – more than double the dead from confirmed US operations. And at least 28 people have died in possible drone strikes so far in 2013, double those killed in confirmed US attacks.

Journalists have struggled at times to investigate reported drone strikes, particularly in 2012 when neither government nor AQAP forces would allow journalists into areas under al Qaeda’s control. Retrospective investigations have uncovered evidence of US involvement in strikes, and discovered previously unreported civilian casualties.

This year investigators from human rights charities HOOD and al Karama and, independently, journalists from a Swedish radio programme visited the site of a January strike. They found fragments of Hellfire missiles, confirming it was a US attack. And they discovered the Yemeni government had acknowledged the deaths of two civilians in the strike, a university student and a teacher. This is despite anonymous government sources previously naming all the dead as al Qaeda militants.

More than half of this year’s reported strikes took place in January, before an 85-day pause while Yemen’s numerous tribes convened for the start of reconciliation talks in the capital. As this conference continued the drones returned in April killing at least four people in Wessab. A week later journalist and activist Farea al Muslimi, who was born in Wessab, testified before the US Congress about the effect of drones on Yemen and its people.

All other US covert operations: 7-14

Once again there were no US drone strikes reported in Somalia in June – the tenth consecutive month with no reported US operations in the country. However al Shabaab continues to threaten Somali security. The militant group once again successfully penetrated the heightened security area around Mogadishu airport to attack the UN Development Programme offices on June 19. As many as 22 people were killed in the assault and ensuing 90-minute gun battle.

Al Shabaab militants were driven from Kismayo late last year by a combination of Kenyan soldiers and local militia. Yet the government in Mogadishu has failed to exert sufficient influence on the southern port, and fighting between competing clans and militia on June 7 and 8 left 31 civilians dead and 38 injured, according to the World Health Organisation. At least seven were killed in further clashes on June 26 and 27.

It emerged that the US operates its drones over Somalia using a satellite relay station in Ramstein, Germany.

Another drone reportedly crashed in Somalia, this time in the north of the country in the autonomous region of Puntland. It is unclear who the drone belonged to, in contrast with an earlier incident in May when the Pentagon unusually claimed a crashed surveillance drone as its own.

Six-monthly trends
The Bureau has not recorded a single US drone attack or other covert operation in Somalia in the first half of 2013. Whether this is due to poor reporting from the region or an absence of attacks is unclear.

Both were UK citizens until Home Secretary Theresa May signed an order in 2010 removing their UK nationality while they were out of the country. May has the power to remove someone’s citizenship on national security grounds. Only individuals with dual nationality can be deprived of their British citizenship. But being born in the UK is not a protection. The Bureau has identified five dual nations who were born in the UK who have been deprived of their British nationality – including Mohamed Sakr.

Sakr’s lawyer Saghir Hussain told the Bureau there appeared to be a link between the deprivation of citizenship and subsequent US action. Leading immigration lawyer Ian McDonald QC said that stripping people of their citizenship ‘means that the British government can completely wash their hands if the security services give information to the Americans who use their drones to track someone and kill them’.