“Some families were completely wiped out”: The Mayor of Hawijah speaks out

Damage in the industrial area of Hawijah, years after the attack in June 2015 (image via NOS).
Web link
Read this article in:
English
Arabic
Dutch

A Dutch airstrike on Hawijah in 2015 led to the deaths of at least 70 civilians. In a key interview, the city's Mayor discusses events that day - and the ongoing suffering of affected civilians.

On the night of June 2nd to June 3rd 2015, Dutch F-16s bombed an ISIS Vehicle-Borne Improvised Explosives Devices (VBIED) factory in the city of Hawijah, in Iraq’s Kirkuk province. Secondary explosions triggered by the airstrike killed at least 70 civilians and wounded hundreds more. Today, the city of Hawijah is still recovering – not only from long-standing ISIS control of the area, but also the lasting impact on civilian lives of the Dutch airstrike five years ago.

For their new joint report, Seeing through the rubble: The civilian impact of the use of explosive weapons in the fight against ISIS, Airwars and PAX interviewed Hawijah Mayor Subhan Al Jabouri about the direct, indirect, and ongoing effects of the strike.

The questions were answered via e-mail on September 28th, 2020. The first part of the interview discusses the direct consequences of the Dutch air raid. The second focuses on the indirect effects. In the third section, the Mayor was asked about the impact the Dutch air raid still has on the lives of civilians in Hawijah. Finally, the Mayor examines the overall damage that both the ISIS occupation and the anti-ISIS Coalition have caused in his city. 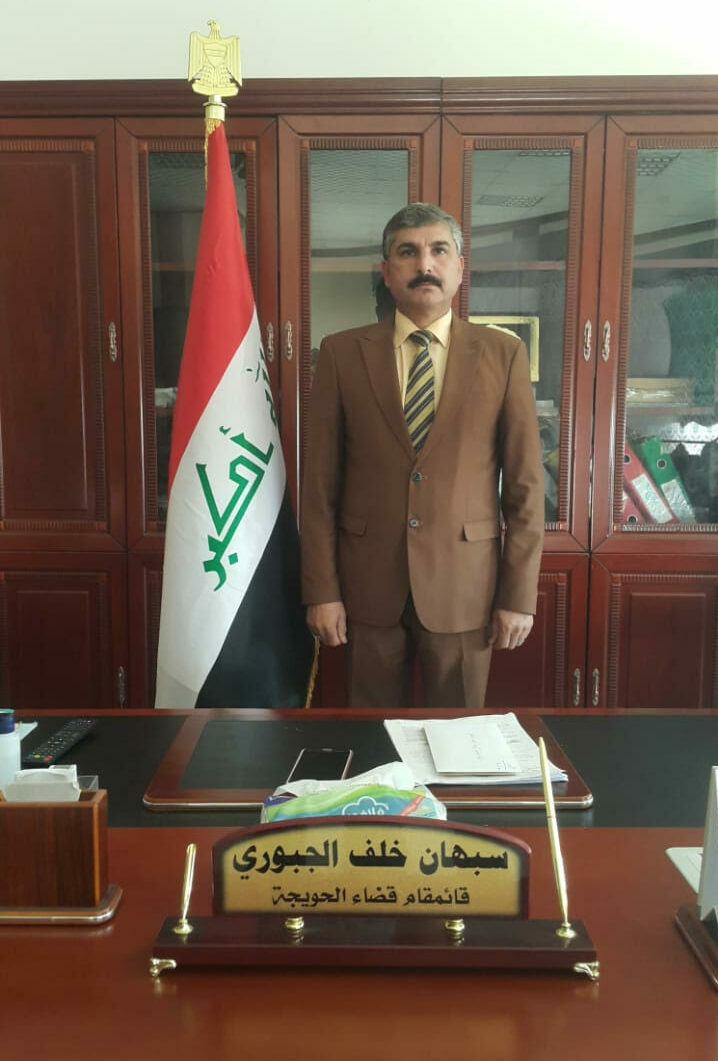 Subhan Al Jabouri, the Mayor of Hawijah, in his office (Image courtesy of the Mayor)

1. What is Hawijah Council’s present estimate of civilian deaths and injuries resulting from this Dutch airstrike?

According to preliminary reports, more than 70 civilians were killed and more than 500 others injured.

2. Can the Council please characterise the damage caused to civilian objects such as houses, roads, medical facilities, shops, schools, childcare facilities, pharmacies, factories? Is there a list of damaged properties?

Besides severe damage to civilian properties, factories, workshops and homes in the surrounding area of the explosion, a power station, civil defence centre and a wheat mill were also destroyed.

3. How many schools were damaged in the attack, and are these functional again?

A total of 37 schools were damaged and four schools are out of service and no longer running and these have not yet been rebuilt.

4. How many pharmacies were damaged and are these open again?

5. Is it true that an ice- and brick factory were damaged, and are these operational again?

Yes, it was confirmed that more than one ice production plant and brick factories were destroyed as a result of the airstrike. The factories have not completely reopened, nor have their owners returned to the area.

6. Is it true that the surface water sewage system was damaged, and is that operational again?

7. Is there an overall estimate of buildings both damaged and destroyed in the Dutch airstrike?

The infrastructure in the area of the explosion and the surrounding neighbourhoods were damaged, which led to the suspension of a large number of facilities, including a power station, main communication lines and water pipes in the area.

9. What has been the impact of the damage to civilian objects and infrastructure from the Dutch airstrike such as a decline in access to water, electricity, heating or other essential services such as water and sanitation services, health services, displacement, environmental impact, rubble and waste management

The great damage caused to the infrastructure of the region and the surrounding areas, as well as damage to the power station and water pipelines, led to the displacement of a large number of families from the affected areas and a significant decrease in access to basic services to them.

10. What psychological impact on local communities does the Council believe has occurred?

The horror of this strike had a profound psychological effect on the psyche of the victims, as it led to the death of dozens of families and the injury of hundreds. Some families were completely wiped out, others lost at least three or four family members. The absence of direct health care and the inability of the people to help their families and watch them die under the rubble induced trauma for the people. This is in addition to the loss of their homes, properties and sources of income and their experiences of being displaced.

11. It has been reported that Hawijans remain concerned about possible radiological and other contaminant effects of both the Dutch strike and the broader campaign to remove ISIS. Can the Council please update us on these concerns?

Despite the liberation of the area and the return of locals and their attempts, the industrial zone and surrounding residential areas have not been rebuilt. However, there are still concerns among the residents about the radiological effects and polluting materials as a result of the tremendous force of the explosion, as some believe that radioactive materials are present in the area.

Part III: Long-term effects
12. How are survivors of the Dutch airstrike presently doing?

The Al-Ghad organisation, in cooperation with the local authorities, is ensuring the registration of survivors and those affected by the airstrike through voluntary work. The information currently recorded shows that the survivors are divided between internally displaced persons in Kirkuk and Salah al-Din governorate, and internally displaced persons inside Hawija as a result of the destruction of homes, sources of income and laboratories, and the lack of basic services in the area.

13. Can the local authorities please confirm the estimate that as a result of this attack, that around 2,000 people experienced psycho-social problems?

Yes, and the number of people affected may exceed this number due to the side effects of the strike.

There are no specialized rehabilitation or psychological support programs that specifically target survivors of the Dutch airstrike, but they may be included in public programs that target the Hawija area or Internally Displaced Peoples.

15. Have victims been compensated in any way? Can the Council confirm that there has been only one family that has received compensation?

No compensation programs were implemented for survivors. 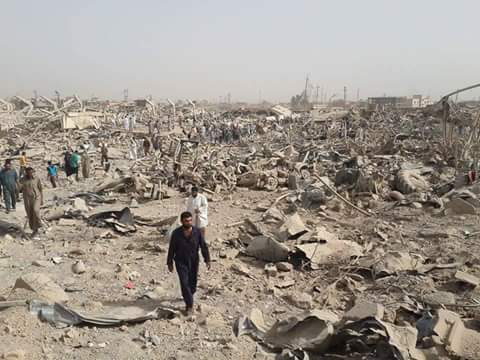 16. Have the homes of citizens been repaired? If so, how many? Could the Council please confirm the estimate that 50-60 per cent of the buildings in the area have now been rebuilt?

The houses have not been completely rebuilt, and the percentage of repaired homes does not exceed 40% of the homes. Families returning to the area live in houses damaged by the effects of the strike, as they are unable to repair their homes. It is difficult to confirm this percentage, as there are many buildings that were completely destroyed and the owners of those buildings have not returned.

17. Have people returned or are they still displaced and under which circumstances are they living now?  How many Hawijans remain displaced from the neighbourhood damaged in the Dutch strike?

Living conditions are very difficult due to the lack of basic services, sources of income and the destruction of homes. It is difficult to determine the percentages of returnees in these areas because some displaced persons from outside these areas have returned to live in the affected areas and many of them are still displaced or settled in other areas such as Kirkuk and Salah al-Din.

The local government has launched plans to rebuild the infrastructure, but it has not been fully implemented and the region still suffers from a lack of services. Some factories have been rebuilt, such as the wheat mill and a few workshops and shops, but a number of factories are still destroyed along with many car showrooms, workshops and schools.

A number of transmission lines and water pipes have been repaired, but the main station that was damaged as a result of the bombing has not been operational yet.

20. Have roads been repaired? If so how many?

Yes, only the main road in the area has been repaired.

21. Has the rubble been cleared? How much?

Some of the debris has been removed but the bigger proportion remains in the area.

22. Is it safe to live in the affected neighbourhoods again? Or is there a risk of unexploded ordnance?

Yes, it is safe, and the Al-Ghad Organisation for Women and Children’s Care is implementing an awareness project about the dangers of war remnants in Hawija now.

23. Do people have access to the same local facilities as before, such as medical facilities, shops, daycares, pharmacies etcetera?

Yes, some facilities were reopened thanks to individual efforts.

24. Can the local authorities confirm the loss of jobs which resulted from this attack (because stores, workshops and factories closed and are still not opened because the area still lacks electricity and has not been rebuilt)?

Hundreds of Hawija residents lost their jobs and sources of income as a result of the destruction of workshops, car showrooms and factories, as well as the destruction of the basic infrastructure of the area. Some people have reopened a small number of workshops and shops, and the mill was rebuilt too, but the lack of services hinders the complete restoration of economic and urban life.

25. One source mentions that one of two water treatment plants (WTP) in the city were damaged in another airstrike. However another source says the WTP itself wasn’t damaged by an airstrike, but instead a power station was damaged that normally provided the WTP with electricity to pump the water. Was it the WTP itself or the power station and pipelines that were damaged?

Yes, the water transmission lines, the supplied electricity network and the power station were all damaged.

26. The source also mentions that currently, only one WTP is functioning in Hawijah, through the public grid. However because the grid is not reliable, the functioning of the WTP is limited and it cannot cover the needs of the population.  Can the Council please confirm if this was and remains true?

Yes, it is true and the situation is still as mentioned.

27. A 2018 report noted that two of the three healthcare facilities in Hawijah had been damaged by fighting with only one functioning at that time – meaning people had to travel to Kirkuk for specialized care. However, a separate local source asserts that “No health care center has been damaged because airstrike, only some minor damages in the Directorate of Health building and it already been rehabilitated, Hawija General Hospital and public health center is functioning now – but according to field staff there are huge gaps in sanitation facilities.”

Could the Council please confirm whether two out of three health centres were or were not damaged – and if so, whether they have now been repaired?

The Health Directorate, known to the government as the ‘second health sector’ was affected by the strike.

28. Can the local authorities please confirm that there are no rehabilitation or psycho-social support programmes for the victims presently available in Hawijah?

Humanitarian organizations generally implement psychological support programs in Hawija, but there are no programs specifically for survivors of the strike.

▲ Damage in the industrial area of Hawijah, years after the attack in June 2015 (image via NOS).