The fresh crisis was triggered after the Libyan capital was attacked by the 7th Brigade – a militia previously confined to the nearby city of of Tarhuna, and which is led by a 33 year old field commander.

The UN, the EU and the P3+1 group for Libya consisting of France, Italy, the UK and the US have all condemned recent events in and around Tripoli. According to OCHA, the United Nations agency, a total of 61 people were killed with another 159 injured and over 2,000 families forced to flee their homes in the first week of fighting.

According to a UN statement UN Secretary General António Guterres reminded “all parties that the indiscriminate use of force is a violation of international humanitarian and human rights law. He urges all parties to grant humanitarian relief for those in need, particularly those who are trapped by the fighting.”

A UN-brokered ceasefire appears to be holding for the moment. 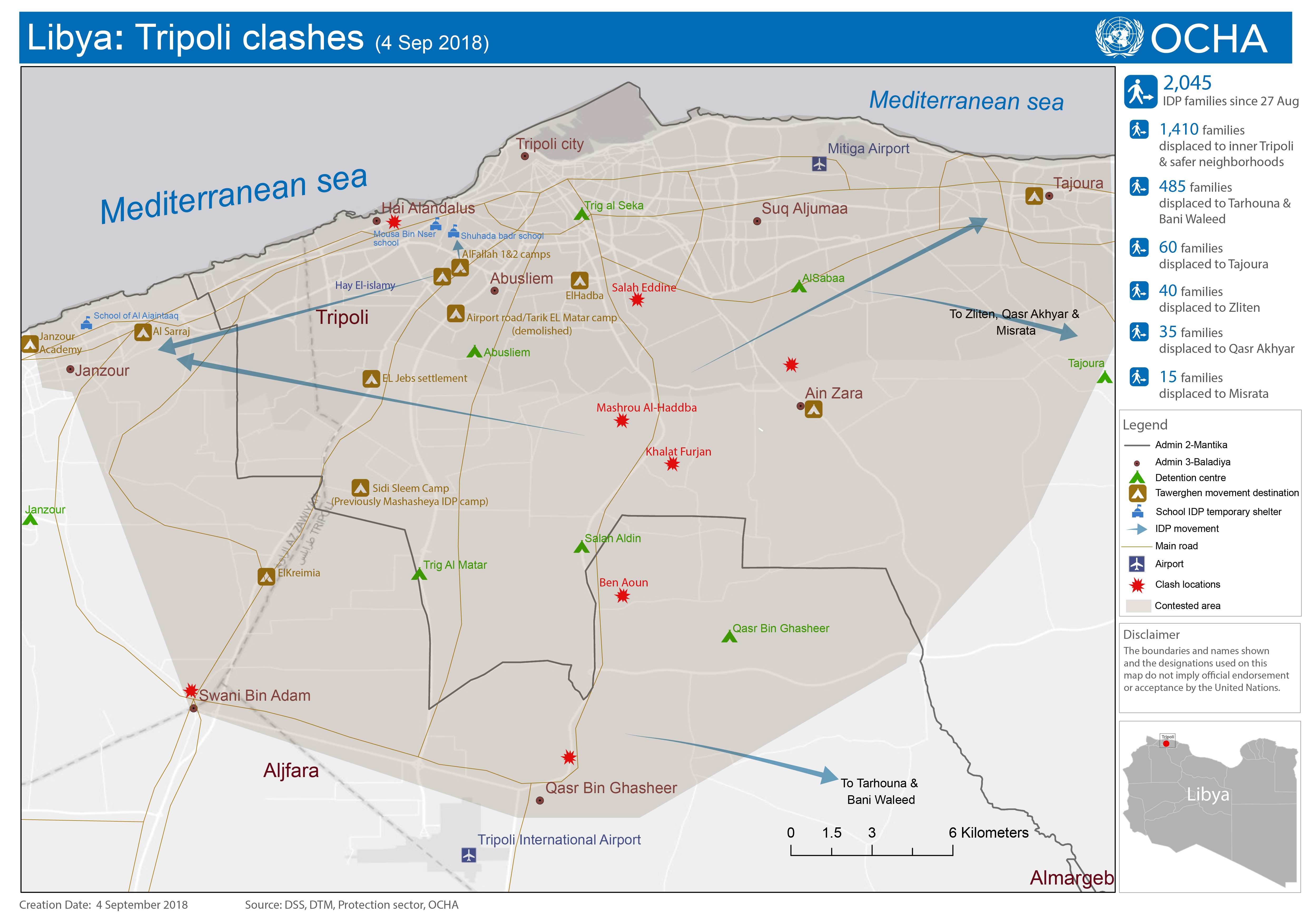 Facts and numbers on the clashes provided by OCHA

The fresh wave of violence in Tripoli began on August 27th, and was triggered by the 7th Brigade, a militia which had previously been based at Tarhuna, 50 km south of Tripoli. It consists of 5,000 members and is fronted by Major General al-Said al-Jedi al-Tarhuni. Also known as the Kaniyat or Kani Brigade, the name was derived from the Kani family which established the Brigade in 2013.

Five Kani brothers still dominate the brigade today: Abdul Khaliq Khalifa Al Kani, who is currently a political and tribal leader, and Mohammed Khalifa Ali Kani, head of the military council of Tarhuna, reportedly come from a Salafist background. Muammar Khalifa al-Kani is responsible for the ‘Ministry of Finance’, banks and municipalities in the city, and Abdulrahim Khalifa Al-Kani, a merchant, supervises security in Tarhuna. The fifth brother is Muhsin Khalifa al-Kani, 33, who is in effective command of the 7th Brigade at Tripoli.

After seizing heavy weaponry in 2013, the 7th Brigade managed to take control of Tarhuna in the following years, providing some sort of stability in the city by reducing crime and kidnappings.

For its operation in Tripoli the 7th Brigade teamed up with other militias from Zintan, Tajoura and Misurata and remnants of groups that were ousted from Tripoli upon the arrival of the UN-recognised Government of National Accord (GNA) in early 2016.

According to a spokesperson for the 7th Brigade, the aim of the present operation is to ‘cleanse’ the capital of the corruption that the Tripoli militias are constantly being accused of. It has denied any affiliation with the rebel Libyan National Army (LNA) controlling other areas of the country, or with any other major actors in Libya.

Prior to the assault by the 7th Brigade and its allies, Tripoli was controlled by five separate militias:

–  The Tripoli Revolutionaries Brigade (TRB) was first established in Benghazi in 2011 and is presently led by Haitham al-Taj Tajuri. It is now known as the First Security Division of the Central General Security Administration.

–  The Special Deterrence Force (SDF) is led by Abd al-Raouf Kara, a Salafist from Tripoli, who runs a detention centre in Mitiga airport, (where up to 500 suspected ISIS members are held.) In 2013 the General National Congress (GNC) legitimized the force by bringing it under nominal Ministry of Interior authority.

–  The Ghanewa Brigade – also known as the Central Security Authority in Abu Sleem – is led by Abd al-Ghani al-Kikli from Kikla in the western mountains.

–  The Central Security Force for North Tripoli, also known as the Nawasi Brigade, has a Salafist background and is led by Mustafa Kaddour.

–  The 301 Brigade is made up of Misrata forces which are based in southern Tripoli and which was established by a decree from former prime minister Khalifa al Ghwell.

These militias initially appeared to provide some stability in Tripoli, which experienced upheaval at the beginning of the second Libyan civil war in 2014. They were also supposed to protect the GNA during its early days in 2016 – but then became its only foothold in the city after the supposed national government failed to establish a proper military presence in Tripoli, or to exercise effective governance outside or inside the capital.

The resulting power vacuum resulted in reported major political influence by the militias over the GNA, with the five armed groups awarded further legitimacy when they were fully acknowledged under the umbrella of the Government of National Accord (GNA).

Libyan Prime Minister Fayez Al Sarraj said in a statement that he had already dissolved the 7th Brigade in April and condemned it for still keeping its weapons arsenal. He further said: “We will not allow the repetition of the destruction and burning of state installations, and we will bear the responsibility of all the Libyans.”

Initial efforts to de-escalate the clashes and reach a ceasefire failed due to the intensity of fighting, which included the use of tanks, artillery and continued random shelling which have so far killed up to 19 civilians.

Airwars has so far tracked five events in which civilians were harmed as a result of artillery shelling, resulting in up to ten deaths and 21 injuries. More information can be found on the Airwars Libya microsite.

On August 29th there were two claimed airstrikes targeting the 7th Brigade and its allied forces. One was reportedly in South Tripoli and the other a claimed strike inside a 7th Brigade military camp in Tarhuna city which killed three members of the brigade. The militia accused both the GNA and Italy of conducting that attack.

The escalation of violence also led to the closure of Tripoli Mitiga airport on August 31st, and as many as 400 inmates escaped from Ain Zara prison in the chaos. There were also reports of hijacking and looting of government institutions in both the south and west of Tripoli.

On September 4th all parties involved in the fighting agreed on a ceasefire brokered by UNSMIL. However, past events have shown that such agreements between militias in Libya can be highly unstable and the coming days will show if the situation around the capital remains peaceful.