The Executive Order signed by President Donald J. Trump on January 27th has sent shock waves through refugee communities, citizens of the seven Muslim-majority countries banned from travel to the US, and the wider international community. But one inclusion appears to have taken even the Pentagon and military planners by surprise.

Key US ally Iraq – in the midst of a bloody campaign to capture Mosul from so called Islamic State (ISIL) – finds itself on the list of banned nations, placing in limbo the visas of many Iraqis who have helped the US. Also at risk: extensive cooperation between thousands of American soldiers and their Iraqi counterparts, painstakingly built up since August 2014.

In an angry response to the Trump ban, Iraqi MPs on January 30th supported a “reciprocity measure” that would similarly prevent Americans from entering the country. Though the measure is so far non-binding, it illustrates how quickly relations have been souring in the days following Trump’s action. In a report from the front lines in Mosul, a member of Iraqi special forces told Associated Press: “When he [Trump] made this decision he destroyed us.”

Perhaps in response to such tensions, in recent days the Coalition has been heavily stressing the vital and deadly role being played by Iraqi forces in the war against ISIL. Daily strike releases now note that Iraqi Security Forces (ISF) “are willing to take the brunt of fighting to liberate their country.” Some Iraqi officials estimate that in addition to 5,000 civilian casualties, some 1,600 Iraqi troops have already been killed or injured in the ongoing battle for Mosul.

‘The Coalition was not consulted’

Trump’s controversial executive order has frozen the US’s refugee program for 120 days – and also blocks all citizens from Iraq, Syria, Yemen, Libya, Somalia, Sudan and Iran from entering the United States for at least 90 days. Widely  criticized as a ‘Muslim Ban’ – in part due to language of the text, and claims by Trump that the US would privilege some religious minorities – the order has led to major protests across the United States including at airports, where over 100 people had reportedly been detained. The first well-publicized incident, at New York’s JFK Airport, saw the detention of an Iraqi man, Hameed Darweesh, who had previously worked as a translator for the US military.

The signing of the controversial order took place at the Pentagon, following the ceremonial swearing-in of former US Marine Corps general James Mattis as US Defense Secretary. Mattis, who stood next to Trump as he signed the order, is seen by some critics of the president as a voice of reason within his Cabinet.

It has since been reported that the Pentagon may not have had a chance to provide input ahead of the signing. According to the New York Times Mattis “did not see a final version of the order until Friday morning, only hours before Mr. Trump arrived to sign it at the Pentagon.”

Airwars reached out to the Pentagon to confirm whether Department of Defense officials had been able to offer advice on the order. The Pentagon referred the question to the White House, which did not respond.

The US-led Coalition did however respond. Chief spokesman Colonel John Dorrian said on January 30th that “The Coalition was not consulted, to my knowledge.” 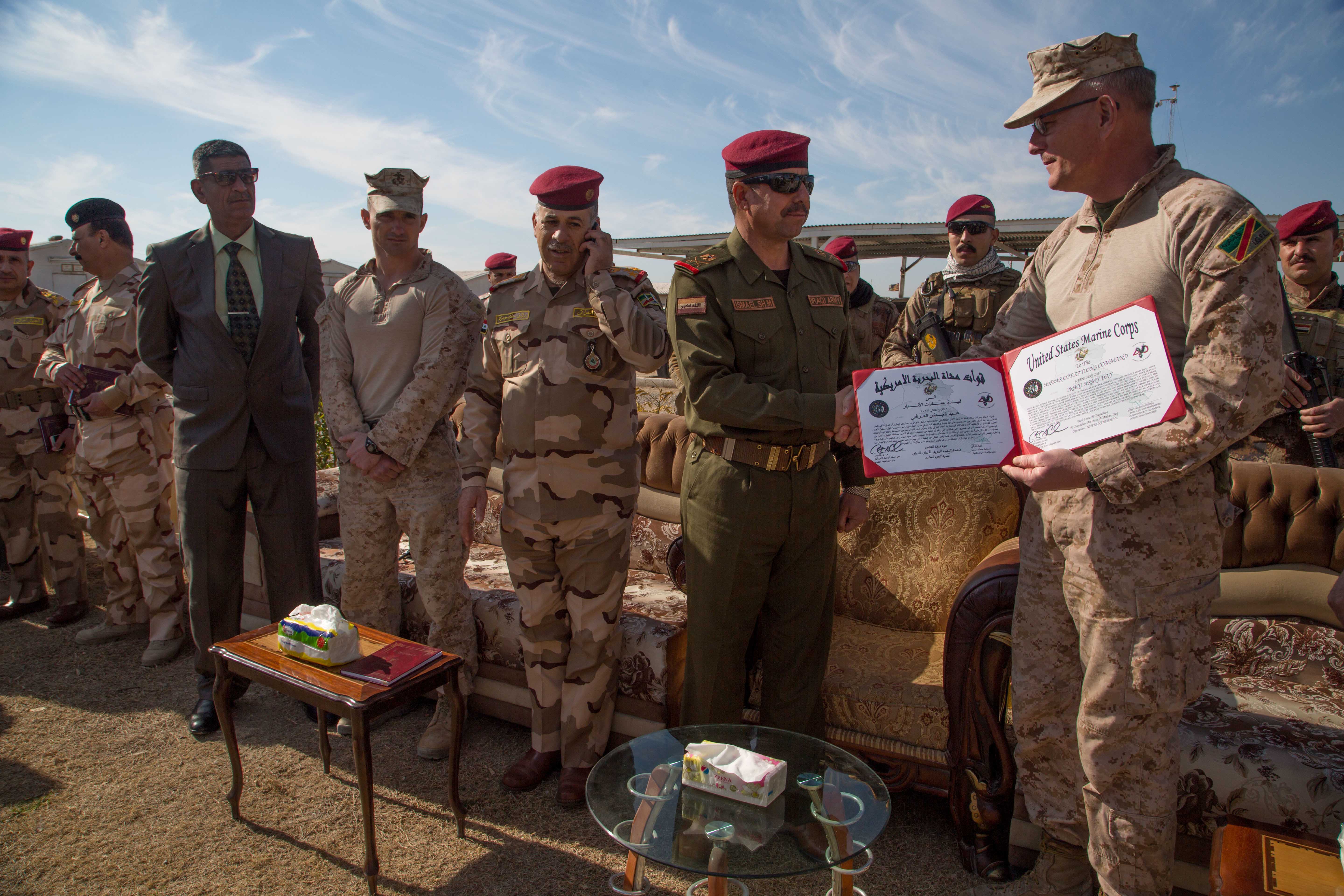 US forces have invested heavily in rebuilding the Iraqi military since 2014. Trust between the two allies remains vital in the fight against ISIL, both on and off the battlefield  (US Army/ Spc. Christopher Brecht)

Iraqi forces are presently in the middle of the biggest military assault since World War 2, as they seek to recapture the country’s second largest city from ISIL forces.  On January 25th – two days before Trump’s executive order was signed – US Army Maj. Gen. Joseph M. Martin declared that the eastern half of Mosul had been completely taken after 100 days of fighting.

“It’s the hardest door-to-door fighting the world has seen in recent history,” Martin told reporters. “There is still a difficult fight ahead in western Mosul, but the ISF has proven that they are both a professional and formidable fighting force.”

There are at least 5,000 American soldiers on the ground in Iraq, in addition to civilian contractors. The US provides direct support through Coalition airstrikes, Apache helicopter firepower and artillery. On the ground, US forces have also been advising their Iraqi partners on the front lines. As Airwars recently reported, by mid January the Coalition had already launched 419 airstrikes in support of Iraqi forces at Mosul – while also firing more than 4,500 artillery shells and rockets. All of these actions require close coordination between the Coalition and Iraqi forces.

The US-backed campaign to rid Iraq of ISIL has in turn displaced hundreds of thousands of civilians, and laid entire cities and towns to waste. At the outset of the Mosul assault, some 1.2 million Iraqis remained trapped in the city. Today, the UN estimates that the majority – some 750,000 – are still within occupied eastern Mosul, which Iraqi forces have yet to penetrate.

That the US would now cut off access to refugees from a country it invaded 14 years ago is a particularly bitter irony for many Iraqis. Baghdad’s former ambassador to the United States Lukman Faily – himself now banned – is one of many high ranking officials voicing their anger: “To be treated like this… to say it’s a betrayal (is) an understatement,” he told Yahoo News.

Members of President Trump’s own party have also pointed to potential blowback from the executive order – which could put civilian lives in even greater danger. “At this very moment, American troops are fighting side-by-side with our Iraqi partners to defeat ISIL. But this executive order bans Iraqi pilots from coming to military bases in Arizona to fight our common enemies,” said Senators John McCain and Lindsey Graham in a joint statement.

“Our most important allies in the fight against ISIL are the vast majority of Muslims who reject its apocalyptic ideology of hatred. This executive order sends a signal, intended or not, that America does not want Muslims coming into our country. That is why we fear this executive order may do more to help terrorist recruitment than improve our security.”

Pentagon officials may struggle to placate others still working with the US military. On January 30th, a spokesperson said the DoD was now working on a list of Iraqis who had assisted US troops, and who might be exempted from Trump’s order – evidently something that hadn’t been done before the new president put pen to paper.