The UN’s expert on extrajudicial killings has described a tactic used by the CIA and first exposed by a Bureau investigation as ‘a war crime’.

Earlier this year the Bureau and the Sunday Times revealed the CIA was deliberately targeting rescuers and funeral-goers in its Pakistan drone strikes. Those controversial tactics have reportedly been revived.

Christof Heyns, the UN special rapporteur, told a meeting in Geneva on June 21: ‘Reference should be made to a study earlier this year by the Bureau of Investigative Journalism… If civilian ‘rescuers’ are indeed being intentionally targeted, there is no doubt about the law: those strikes are a war crime.’

Heyns’ forthright comments were made at an American Civil Liberties Union (ACLU) event, linked to a UN debate into the US covert war on terror.

Ambassador Zamir Akram, Pakistan’s permanent representative to the UN in Geneva told the Bureau ‘we fully agree with what has been said by Mr Heyns.’ Ambassador Akram called on the US ‘to respect the growing international opinion’ that the use of drones ‘not only violates our sovereignty but also violates the UN charter in our view and also international law.’

Reference should be made to a study earlier this year by the Bureau of Investigative Journalism… If civilian ‘rescuers’ are indeed being intentionally targeted, there is no doubt about the law: those strikes are a war crime.
Christof Heyns, UN special rapporteur

In a separate presentation to the Council, Heyns, said that he was hopeful that the US would reveal the procedures, rules and legal opinions underlying its controversial use of drones. He also noted that the US government did not give his predecessor a satisfactory response when asked to clarify which aspects of international law it believes covers targeted killings.

But after a two-day Council debate, Heyns said the US had not been forthcoming: ‘I don’t think we have the full answer to the legal framework,’ he said. ‘We certainly don’t have the answer to the accountability issues.’

A number of other Geneva delegates also expressed concern about targeted killings. Swiss UNHRC representative Dante Martinelli addressed the Council and called for transparent reporting of casualties from targeted killing operations which ’cause many victims among the civilian population.’ Because of the cost to civilians, Switzerland called for ‘respect for the rules of international law.’

Outside the Council’s purview
The United States responded to Heyns’ report by saying the question of targeted killings of al Qaeda members and their allies was ‘broader than the issues in the purview of this Council,’ and that ‘questions about the US legal and policy framework for use of force against al Qaeda and associated forces have been addressed by senior US officials in a number of recent public statements.’ 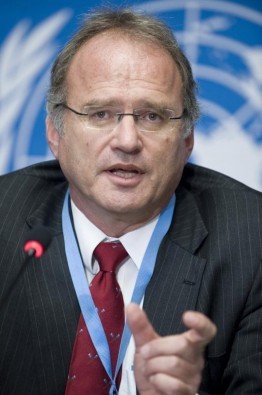 In those public statements senior White House officials, including presidential adviser John Brennan, argued that because the US is in a worldwide, armed conflict with al Qaeda and its allies, strikes are governed by the laws of armed conflict. Targeted killings are therefore legal and can be carried out in self defense.

Heyns later told the Bureau that his key concern, however, is whether the US is now setting a dangerous precedent. ‘The spectre that haunts the whole thing is that eventually everyone thinks they can use force in this way.’

Hina Shamsi, national security director of the ACLU and at the UN debate, shares Heyns’ concern: ‘The authority the government asserts today could be used tomorrow by nations with far less respect for the right for life.’

The ACLU insists that the US is not applying the laws of war or human rights law to its targeted killing policy. Instead ‘the United States has cobbled together its own legal framework for targeted killing, with standards that are far less stringent than the law allows,’ says Shamsi.

The authority the government asserts today could be used tomorrow by nations with far less respect for the right for life.’
Hina Shamsi, ACLU

Jonathan Eyal of the Royal United Services Institute (RUSI) says the US’s ‘rather shop worn’ legal and ethical justification for its covert drone strikes are symptomatic of a hardening of Washington’s position on the issue of targeted killings.

Eyal believe that this stems both from not wanting to appear weak in the fight against al Qaeda in an election year, and because of the complexities of arresting and trying suspects. ‘I don’t think there is any temptation within the United States for anyone to admit that these practices are illegal or at least to say that they will cease in the future,’ he added.

Professor Philip Alston, the former special rapporteur on extrajudicial killings told the Bureau: ‘there has been a huge reluctance to criticise policies of the Obama administration’ by America’s allies.

‘Instead, most states are remaining relatively silent in the face of the evolution of US policies that are entirely inconsistent with international law and deeply problematic from a human rights and international law perspective.’