Note: this article has been updated to include a response from the Coalition.

United Nations investigators charged with monitoring the Syrian conflict have accused both Russia and the US-led Coalition of potentially violating international law or war crimes for strikes in the country during 2017.

In a year which saw shocking reports of civilian harm across Syria, the UN’s Independent International Commission of Inquiry on the Syrian Arab Republic launched a blistering attack on the many belligerents, domestic and foreign, who now crowd Syria’s soil.

The latest report of the Commission of Inquiry outlined cluster munition use by pro-government forces; an attack on a hospital that was treating victims of an April 4th 2017 sarin gas attack; and a brutal pro-government campaign in the second half of that year in the Aleppo countryside, targeting schools – a campaign which the Commission said amounted in each instance to war crimes.

ISIS was accused of using snipers and landmines to deliberately target civilians at Raqqa, forcing them to remain within the beseiged city, and of forcibly moving civilians into neighbourhoods under attack from assaulting forces: “By deliberately placing civilians in areas where they were exposed to combat operations, for the purpose of rendering those areas immune from attack, ISIL militants committed the war crime of using human shields in Raqqah governorate,” the Commission noted.

Investigators also cited the US-supported Syrian Democratic Forces (SDF) for conscripting children as young as 13 as fighters. In the aftermath of fighting in Raqqa, the Commission noted, the SDF has been interning up to 80,000 displaced people in desert camps, ostensibly to vet them for possible connections to ISIS. According to the Commission, “Irrespective of the legitimacy of a security threat, the blanket internment of all internally displaced persons from Raqqah and Dayr al-Zawr by the Syrian Democratic Forces cannot be justified.”

The Commission also implicated, in effect, four of the five permanent members of the UN Security Council with involvement – either directly, or by association – with likely unlawful airstrikes. That marked a significant change from late 2015, when Commission chair Paulo Pinheiro said there was “no possibility that we will investigate the American air strikes or French or British or Russian.” In the years since, Russian and US-led airstrikes have reportedly killed thousands of civilians in Syria, leading to a far more robust response from the Commission.

In the case of November 13th 2017 airstrikes in Aleppo, UN investigators took the important step of naming Russia as the perpetrator — not simply “pro-government” forces or the regime and its allies. In a separate investigation, the Commission offered new details about what may be the deadliest airstrike of the entire US-led campaign in Iraq or Syria – an alliance that also counts among its ranks UNSC permanent members France and the United Kingdom.

On the night of March 20th-21st 2017, the Al-Badiya school in al Mansourah, by almost all accounts filled with at least 200 internally displaced people, was struck by the Coalition.The US-led alliance has confirmed it conducted the attack – though continues to insist that only ISIS fighters died.

In a September 2017 Human Rights Watch report, researchers interviewed local residents who said some “ISIS members and their families displaced from Iraq had moved into the school prior to the attack,” but that many also were “completely unaffiliated with ISIS.” HRW found that at least 40 named civilians, including 16 children were killed, and said the toll was likely much higher. The UN-sponsored Commission now assesses that 150 civilians were in fact killed that night – and insists no Islamic State fighters died.

Though it is not allowed to enter Syria by the Assad government, the Commission was able to interview 20 survivors, relatives, rescuers and other witnesses. “Interviewees explained that, since 2012, Al-Badiya school housed internally displaced families,” wrote the UN investigators. “Some of the residents were recent arrivals while other internally displaced persons had been living in the school for years.”

In the weeks after the strike, Airwars itself provided the Coalition with a 28-page dossier of reports monitored prior to and after the attack which in part described the movement or presence of IDPs in the near area.

In their new report, UN investigators found that the school was hit by three separate airstrikes, “each using multiple bombs that destroyed most of the building rendering it uninhabitable.” They also obtained photographs which showed the type of aerial weapons, including Hellfire missiles, which were likely used.

“We had multiple corroborating intelligence sources from various types of intelligence that told us the enemy was using that school,” Townsend told reporters on March 28th 2017. “And we observed it. And we saw what we expected to see. We struck it.”

“Afterwards, we got an allegation that it wasn’t ISIS fighters in there… it was instead refugees of some sort in the school,” Townsend continued. “Yet, not seeing any corroborating evidence of that. In fact, everything we’ve seen since then suggests that it was the 30 or so ISIS fighters we expected to be there.” 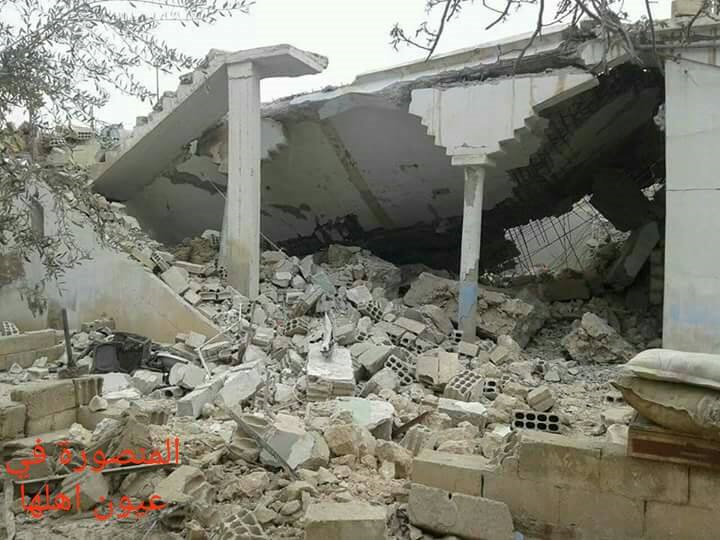 The aftermath of a Coalition strike on a school in Al Mansoura, March 21st . This is one of the few images to show the destruction of the attack. (via Mansoura in its People’s Eyes)

In its most recent report, the Commission of Inquiry rebutts that version of events. “Information gathered by the Commission does not support the claim that 30 ISIS fighters were in the school at the time of the strike, nor that the school was otherwise being used by ISIS,” it wrote. Investigators said the Coalition should have been aware that the school had been sheltering displaced families for five years. Indeed, among the reports provided to the Coalition by Airwars that described the presence of IDPs were several that predated the strike by several weeks.

The Commission concluded that the Coalition violated international law in failing to “take all feasible precautions to avoid or minimize incidental loss of life, injury to civilians and damage to civilian objects.”

The Coalition’s investigative team ultimately concluded that allegations of civilian harm in the Mansoura incident were “non-credible.” As in other high profile US or US-led attacks, Coalition investigators did not visit the site of the strike, instead relying on its own internal sources such as strike video. The Coalition’s subsequent investigation, said the Commission, should have been able to “identify the high number of civilian casualties resulting from this incident.”

Even after Human Rights Watch provided the Coalition with detailed information from its own in-person investigation and published those findings, the Coalition did not reopen the case. Reached by Airwars following the release of the Commission’s report, the Coalition repeated their earlier non-credible assessment but said they would consider the findings.

“Based on all evidence provided, to include weapons system video, we have no solid indication civilian casualties resulted from this strike,” said a Coalition spokesperson. “We are interested in the facts the U.N. used to reach a different determination than our assessment. We have in the past re-examined our assessments based on new information, and are willing to reevaluate this assessment if credible or compelling additional information can be obtained.”

The tandem Russian-Syrian aerial campaign in Syria continues to pose significant roadblocks to accountability. Most reports citing Russia during the recent bombing in eastern Ghouta, for instance, have also cited the regime as the possible culprit. Unlike the Coalition however, neither Moscow nor the regime make any effort to admit civilian harm. That makes the second significant case study of international strikes so important in the new UN report.

In an important piece of detective work examining a mass casualty event at Atareb on November 13th 2017, the Commission’s investigators were able to study flight records and pilot communications – and declare that the Russian air force was responsible for a series of strikes that left at least 84 civilians dead and some 150 injured. “Using unguided weapons, the attack struck a market, police station, shops, and a restaurant, and may amount to a war crime,” the Commission said in a statement. 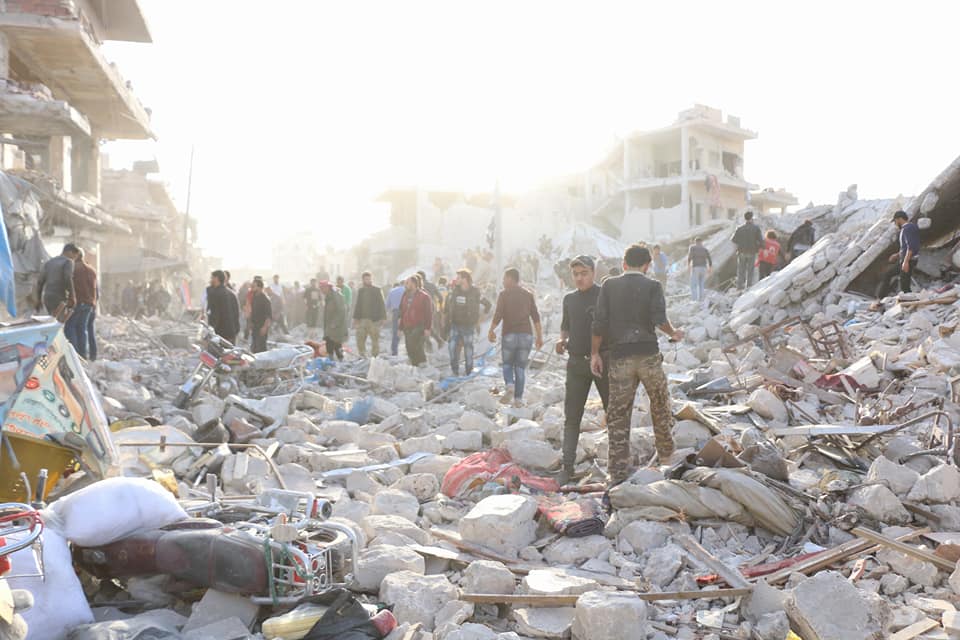 Aftermath of the November 13th attack in Atareb. (via Syrian Network for Human Rights)

At the time of the attack, while some local reports did cite the regime the large majority blamed Russia alone. Based on those reports, Airwars assessed that the events in Atareb were the deadliest in all of Syria that week to be tied to Russia. According to to the UN, these early accounts – monitored by Airwars – citing local testimony and observations of planes flying overhead proved accurate.

The first target hit in Atareb was a police station, where at least 13 officers and six prisoners died. The Commission found that the police were not involved in fighting, and that the station was not a “lawful military objective.” Four minutes later, a nearby three-story building was bombed.

A third, catastrophic wave of strikes then followed, hitting “a market street killing and maiming civilians and destroying vegetable and clothing shops as well as nearby residential buildings.” The Commission said it was able to corroborate local accounts by using video captured at the scene, and via satellite imagery.

“Shop owners explained that, at the time of the attack, the market was crowded with people who had left work, most of whom were men since many women had stopped going to the market after the earlier attacks,” wrote investigators.

In the market area, the Commission found evidence consistent with damage caused by unguided Russian-made OFAB-500 bombs. Elsewhere was an entry hole through which an unexploded bomplet fell. “Evidence at the scene and video evidence is consistent with a BeTAB-500 unguided ‘bunker buster’ carrying 12 rocket-assisted penetrators,” wrote investigators. “Using such weapons in a densely civilian populated area was certain to impact civilians.”

While Coalition strikes have mostly tailed off after Syrian Democratic Forces captured Raqqa in October 2017, Russian strikes have been blamed for record numbers of civilian deaths in recent weeks. Between February 19th and February 25th alone, Airwars tracked a record 78 new alleged Russian civilian casualty incidents in Syria – nearly all in eastern Ghouta – that reportedly left at least 324 civilians dead.

On March 5th 2018, the UN Human Rights Council requested that the Commission of Inquiry conduct an urgent investigation into the offensive in the besieged suburb of Damascus.