Civilian harm reduction proposals cautiously welcomed by NGOs - but delivery will be key.

Secretary of Defense Lloyd Austin has announced major proposals to overhaul how the US military monitors, assesses and documents when its actions kill civilians, a move warily welcomed by human rights and civilian harm mitigation NGOs.

Building on years of documentation by groups like the Syrian Network for Human Rights and Airwars, since late 2021 the New York Times has produced a series of deep investigations documenting systemic flaws in the way US military operations track casualties from their strikes. These revelations have prompted further scrutiny of the US military’s approach to civilian harm and raised pressures on the Biden administration to intervene.

In a directive released on January 27th, Austin announced a major shake-up of Department of Defense (DoD) policies on civilian harm reduction, including the establishment of a ‘civilian protection center of excellence’.

The directive gives the Under Secretary of Defense for Policy, Dr Colin Kahl, 90 days to prepare a “comprehensive” Civilian Harm Mitigation and Response Action Plan, or CHMRAP, that emphasises that “efforts to protect civilians are the responsibility of all leaders throughout the (DoD), always, and not only that of our commanders and personnel in the field in the execution of missions assigned.”

Austin’s directive also paves the way for the establishment of a new ‘civilian protection center of excellence’ which according to DoD, will enable it to “better expedite and institutionalize the advancement of our knowledge, practices, and tools for preventing, mitigating, and responding to civilian harm.”

And there are also plans to shake up how the Pentagon collects, shares and learns from casualty data; to re-examine the issue of condolence payments to victims; and to “Incorporate guidance for addressing civilian harm across the full spectrum of armed conflict into doctrine and operational plans, so that we are prepared to mitigate and respond to civilian harm in any future fight.”

The CHMRAP will then itself feed into a forthcoming Department of Defense Instruction, or DODI – a long awaited department-wide policy on civilian harm reduction. Airwars was among more than a dozen US and international NGOs which engaged extensively with the Pentagon on the DODI – which has been awaiting a signature since November 2020, when drafting was completed.

According to Austin, the DODI “should be informed by the CHMRAP and presented to the Secretary of Defense  for signature within 90 days of the CHMRAP’s conclusion” – meaning it should come into force by late July.

“Austin’s directive and the promised release of the DODI could be a crucial step towards standardising the US military’s approach to civilian harm assessments across US commands,” Emily Tripp, Airwars’ research manager, said.

Marc Garlasco, a military advisor at PAX and former civilian harm assessor with NATO, was among those cautiously welcoming the Pentagon announcements. “The memo sends a strong message that civilian harm mitigation (CHM) is not simply an issue for counterinsurgency. The US military is embracing CHM as it shifts to great power competition,” he said in a thread on Twitter.

🧵 on today's memo on "Improving Civilian Harm Mitigation & Response" by @SecDef. The memo is welcome focus from the highest level of @DeptofDefense showing leadership & taking ownership of the issue of civilian harm. Allow me to cover the salient points both pro & con 1/ #CIVCAS https://t.co/BJ83W6mXX9

On the same day that Secretary Austin announced his shakeup, the RAND Corporation also published a major Congressionally-mandated review of the US military’s approaches to mitigating civilian harm.

The deep-dive report, ‘US Department of Defense Civilian Casualty Policies and Procedures,’ argues that while the DoD may have made progress in some areas, “additional concrete steps are overdue.”

RAND points to several weaknesses in the DoD’s own policies and procedures – including that military officials often did not “sufficiently engage external sources” such as Airwars before they concluded investigations and designated them as non-credible; that investigations are often treated as independent of each other and so levels of detail between them vary widely; and that military assessments are often subject to long delays.

Several graphics in the report demonstrate the often extreme gap between US military estimates of civilian harm, and those of NGOs such as Amnesty International, Human Rights Watch and Airwars – noting that in Syria in 2019, more than 1,100 civilian deaths were locally alleged from US actions, yet with only 21 fatalities so far officially admitted. 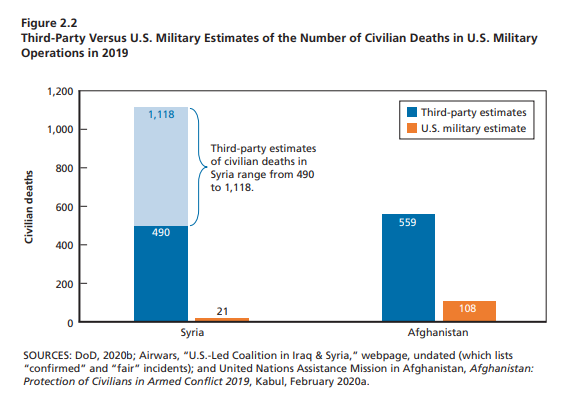 The RAND report makes a number of recommendations, noting that many were called for several years ago. These include incorporating civilian harm assessments into intelligence estimates; reducing the eligibility conditions for those who can claim ex gratia payments; and implementing a standardised civilian harm reporting process across conflicts.

Airwars was among several stakeholders which met with RAND during the drafting of the report. “Many of the critical recommendations in this valuable study have long been requested by the NGO community and by Congress – and we urge the Biden Administration to now act swiftly,” Airwars director Chris Woods said.