Recorded US drone strikes to date

Recorded US air and cruise missile strikes to date

* The Bureau’s estimates are based predominantly on open sources information like media reports. Sometimes it is not possible to reconcile details in different reports. This is why use ranges for our record of casualties and, in the case of Yemen and Somalia, our strike tallies.

** The US has only carried out drone strikes in Pakistan.

As many US air strikes were reported in Afghanistan in July as in the preceding six months combined. This high intensity bombardment came as the CIA goes 56 days without carrying out a strike across the border in Pakistan.

The US continued its campaign in Yemen despite the ongoing civil war tearing the country apart. And there appears to have been a change of tactics in Somalia with six strikes targeting al Shabaab fighters about to attack African Union peacekeepers.

There were no CIA strikes reported in Pakistan in July – the second calendar month of 2015 without a recorded attack after February.

With the last strike on June 6, the pause in attacks has stretched to 56 days, in stark contrast to the intensity of air attacks just across the border in Afghanistan’s Nangarhar province, which abuts Pakistan’s tribal areas.

While US drone attacks may be on hiatus in Pakistan, the Pakistan military has continued its offensive in the tribal areas. These operations have reportedly pushed Taliban fighters into Afghanistan, possibly leaving the drones with a paucity of targets in Pakistan and a glut in Nangarhar.

So far in 2015, the Shawal area of North Waziristan has been the focus of US air attacks. Nine of the 11 strikes reported this year have hit this mountainous, thickly wooded territory that straddles the North and South Waziristan border, and the Pakistan-Afghanistan boundary.

This terrain makes it a difficult place for the Pakistan army to operate. The military had held off going into Shawal until the first week of July. The advancing troops may have pushed Taliban fighters and their families across the border into Afghanistan, emptying a formerly target rich environment for the CIA’s drones.

At least 216 people were reportedly killed in July – more than in any month since January 1.

The Bureau has managed to record casualty data on a fraction of the strikes reported in monthly aggregates by the US military. The air force has flown 153 “sorties with at least one weapon release” between January 1 and the end of June, at an average of 26 per month. However the intensity increased in June – rising to 49 sorties from 21 in May. 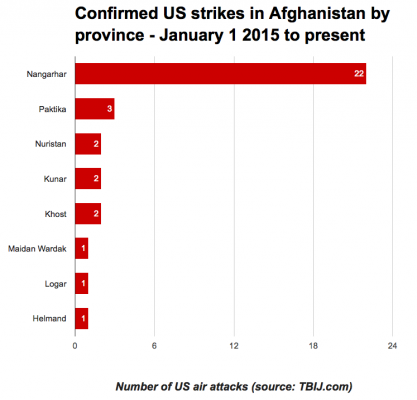 The increased tempo of US operations could reflect a growing concern the Afghan military is struggling to keep the resurgent Taliban at bay. Nangarhar in particular has seen considerable levels of violence, potentially a consequence of Taliban fighters fleeing Pakistan’s nearby tribal agencies, before the advancing Pakistan army.

The US military is only supposed to be carrying out counter-terrorism operations in Afghanistan, leaving the counter-insurgency work to the Afghan army and police.

When the US does comment on air attacks in Afghanistan, it generally says the strike was carried out against “individuals threatening the force”. It is not clear whether this is a reference to US troops carrying out ground operations who are in need of air support – possibly the US trying to mop up fighters from the various armed terrorist groups that have fled across the border from Pakistan. Or the US could now be providing air support to beleagured Afghan security forces which are struggling to maintain stability.

Afghan forces have been calling on the US for air support. And the National Directorate of Security, the Afghan intelligence agency, said it provided the US with intelligence for a July 7 strike on a group of alleged Islamic State fighters.

A US strike on a Afghan National Army outpost on July 20 provoked outrage in the Afghan senate. Two helicopter gunships killed at least seven Afghan soldiers in Logar province. “The incident happened at a time when there were no clashes in the area and foreign troops had not been asked for help,” according to General Abdul Razziq Sapai, commander of the army brigade in the province.

Three US drone strikes hit Yemen in July, killing at least 11 people. Two strikes hit Mukalla in the eastern Hadramout province and al Qaeda in the Arabian Peninsula (AQAP’s) base of operations. The third strike hit in Abyan, Hadramout’s neighbouring province, killing four or five people in a car reportedly driving from Mukalla.

AQAP has been operating out of Mukalla since April when central government forces withdrew from the eastern province.

The US has continued drone operations in Yemen while chaos has engulfed the country. The three attacks in July took the total number of people reported killed in 2015 to 50. There have now been 15 strikes this year, two less than were recorded in all 2014.

Yemen’s civil war ground on throughout July despite attempted ceasefires as fears of a humanitarian crisis grew. The Saudi-led campaign against the Houthi militia which took over the capital last year appeared to gain momentum, with the key southern city of Aden falling to Riyadh-allied forces in the second half of the month. The Washington Post attributed the turnaround – coming after months of airstrikes failed to break the stalemate – to the arrival of Saudi-trained Yemeni fighters on the frontline.

At least six US strikes hit Somalia in the space of two or three days after July 15 – an unprecedented frequency of attacks in the Bureau’s records.

One killed two or three people, according to local residents and Somali officials. The death toll from the other five strikes remains unreported. A US spokesman told the Bureau: “We are still assessing the results of the operation and will provide additional information if and when appropriate.”

The strikes appeared to signal a change in tactics from the US. Strikes reported in Somalia have historically been attempts at decapitating al Shabaab, targeting senior members of the group. However the six or more strikes in July were close air support for African Union peacekeepers, as the US spokesman explained: “Over the past week, US forces conducted a series of strikes against al Shabaab, an al Qaeda-affiliated terrorist group in Somalia, in defense of Amisom [African Union Mission to Somalia] forces under imminent threat of attack.”

The Amisom troops were advancing on the town of Baardheere which they took after the glut of drone attacks, in later July. Kenyan military reportedly killed 50 in an artillery barrage shortly after the first reported US strike on July 15. There were reports that US forces were involved in the operation.

The US has reportedly moved more drones out to East Africa, according to a senior US official speaking to the LA Times. This is reflected in the greater capacity built into the US drone base in Djibouti, at Chabelley air field, in 2015.