US strikes shoot up in Somalia

US strikes in Somalia shot up in November, with American planes carrying out five times as many strikes as they did in the previous month.

Nearly half of these strikes targeted Islamic State, with the US hitting the group in Somalia for the first time at the beginning of the month.

A band of fighters from the semi-autonomous region of Puntland pledged loyalty to the Islamic State group in 2015, breaking their ties to al Shabaab. Last year the group numbered just a few dozen fighters but has since grown to as many as 200, according to a UN monitoring body.

The fact that the US now has two targets in Somalia could mean a rise in US air operations. A record 31 strikes have hit Somalia this year, with a third of these taking place solely in November.

Trump’s predecessor Barack Obama had already escalated strikes in Somalia to 14 in 2016, reflecting the growing number of attacks by al Shabaab insurgents.

However, since Trump came to office the rate of drone strikes in the East African country has doubled.

This partly reflects new rules introduced by the Trump administration in March 2017 which exempted swathes of Somalia “areas of active hostilities”. This has given commanders a freer hand to launch strikes. 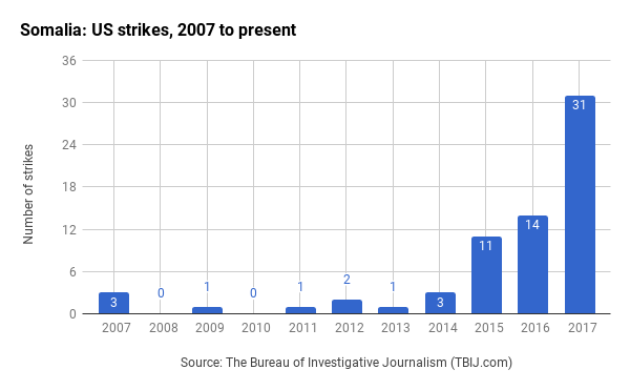