Russia is marking the first year of a bombing campaign in Syria with some of its deadliest strikes yet, leaving hundreds of civilian casualties in just the past week in besieged Eastern Aleppo – and effectively scuttling diplomatic efforts to pause the war.

According to local monitors more than 3,000 civilians have so far been killed by Russia in its campaign in support of the Assad regime. A new Airwars assessment published this week shows that in January 2016 alone, Russia likely killed more than 700 civilians in Syria.

The severity of the Russian campaign over the past year has varied, reaching a previous high in January and February before falling off for several months, according to Airwars tracking. The latest strikes in Aleppo are heavily concentrated. Yet the huge civilian toll follows a pattern which has characterized Russia’s campaign since it first intervened on September 30th 2015. Implausibly, Russia has not admitted to killing a single Syrian civilian since then.

Researchers at Airwars have assessed extensive open source evidence to determine that in just the first four months of bombing, 291 separate attacks involving Russian forces left between 1,783 and 2,394 noncombatants dead and more than 2,722 injured.

In total, Airwars has tracked more than 1,300 civilian casualty events allegedly involving Russian forces. Those claims list over 7,000 potential civilian fatalities to date – a figure which will be reduced as researchers vet each incident to determine if possible who was responsible, and whether initially reported casualty numbers were accurate.

The already-vetted data tells us much about the ferocity of Russia’s campaign. The minimum civilian toll from Russian strikes between September 30th and January 31st – 1,783 deaths – is already higher than the 1,612 civilian that researchers at Airwars estimate have been killed by US-led Coalition strikes in both Iraq and Syria in the two years since it began a separate campaign targeting ISIL. In other words, Russia has killed more civilians than the Coalition, in one sixth of the time.

Though the US has carried out investigations into civilian casualties, it has admitted to just 55 civilian deaths in Syria and Iraq – a miniscule number that sets a dangerous precedent for accountability. Those low Coalition casualty claims also weaken any moral pressure the US and its allies might hope to bring on Russia and Assad – even as Aleppo burns.

In a report published this March, Airwars said its database of incidents “indicates that Russia has systematically targeted civilian neighbourhoods and civilian infrastructure – including water plants, wells, marketplaces, bakeries, food depots and aid convoys.” That pattern has continued.

Just last week, suspected Russian planes were involved in an attack on a UN-coordinated aid convoy in the countryside of Aleppo. Eighteen of 31 trucks were destroyed and at least 20 people killed. According to the UN’s child welfare agency UNICEF, nearly 100 children have been killed since last Friday alone in Aleppo. Monitoring groups say Russia has carried out most attacks in the city since the breakdown of a tentative ceasefire.

“There is no doubt that the Russians are deliberately targeting civilians,” says Fadel Abdul Ghany, head of the Syrian Network For Human Rights, one of the groups whose reporting Airwars draws from and evaluates. Ghany says he presented details of Moscow’s strikes to Russian diplomats in New York late last year. “They denied everything,” he now recalls of the encounter.

Though often unidentified in the media outside of high profile attacks, victims of alleged Russian strikes have in fact been consistently named by local monitoring organizations. In those first four months of Russian bombing between September 30th and January 31st, Airwars has so far been able to list the names of 2,104 civilians allegedly killed by Moscow’s strikes – or three in four of those reported slain.

Among these are at least eight civilians named by the Violations Documentation Center as being killed by Russian airstrikes on January 9th 2016, in Aleppo’s Al Ameria and Al Sukkari neighbourhoods. Most were elderly men in their seventies and eighties. VDC has named Shaker Hweidi (aged 70); Omar Hweidi (84); Abdulaziz Hweidi (82); Kamel Sultan (81); Mohammad Sultan (82); Nader Sultan (aged 30); and a young boy from the Sultan Family. 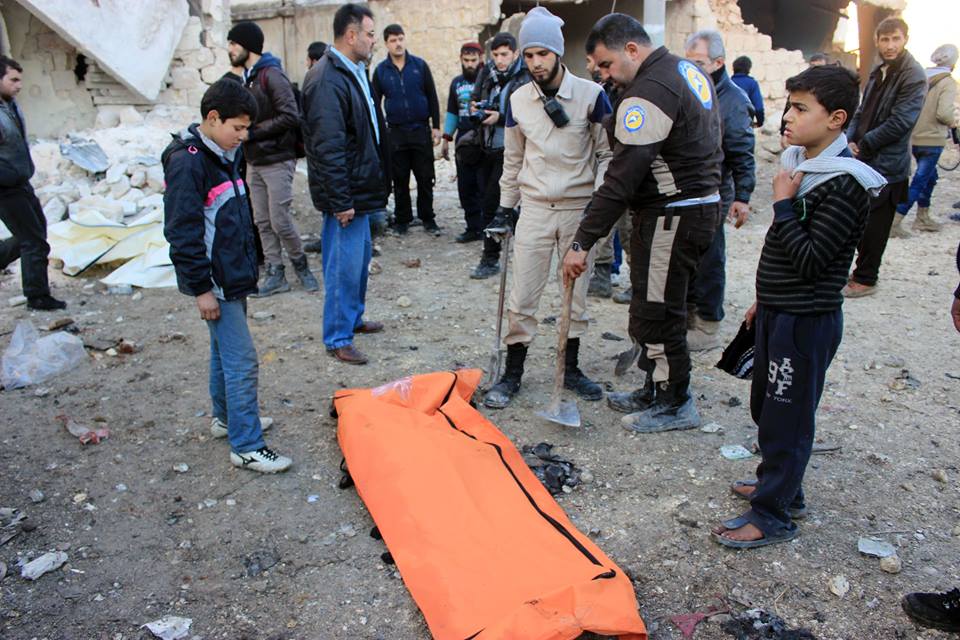 The White Helmets at the scene of an airstrike on Al Sukkari, Aleppo on January 9th 2016 which killed eight civilians – including five elderly men (via White Helmets)

According to Google archiving, there are now more videod minutes of the Syria conflict than minutes of the war itself. Events that used to exist in a fog of war are now posted online almost instantaneously. Though Russia denies killing civilians, thousands upon thousands of videos on Youtube, Twitter and Facebook show otherwise.

Though the exact perpetrator of these killings cannot always be proven beyond a reasonable doubt, the only question in most cases is whether they fell victim to Russia’s bombs or to those of the Assad regime.

“From 2011 it was clear that the regime’s forces were carrying out crimes against humanity, and subsequently from 2012 war crimes in going after the civilian population,” says Neil Sammonds, Syria researcher at Amnesty International. “Russia followed suit almost immediately when it came to the regime’s rescue one year ago.”

Within months, Amnesty had determined Russia was deliberately targeting civilians. By this April says Sammonds, Russia “was appearing to be actively targeting the essential facilities that a civilian population needs in order to survive,  thereby intending to forcibly displace civilians and not allow them access to IDP camps and medical care on the road.” Hospitals in particular have been targeted.

Russian strikes, adds Sammonds, tend to be more powerful than those of the regime. In addition to their use of cluster munitions and incendiary weapons, recent reports indicate that in Aleppo, Russia has now employed powerful “bunker buster” bombs that can penetrate further and leave a vast and deep blast radius.

Aftermath of a likely Russian airstrike on a mosque in Qadi A’skar,
Aleppo governorate, January 12th (via White Helmets)

Airwars has now released comprehensive data for January 2016, which adds significantly to existing totals.  Its provisional view is that between 713 and 974 non combatants died during January alone, making it the deadliest month of Russian strikes to date. Among those victims were a minimum of 198 children, representing a 157 percent increase over child deaths in December. Reported deaths of women also more than doubled to at least 105. Attacks were particularly bloody in the final week of January in both Aleppo and the Islamic State-besieged city of Deir ez-Zor.

Among the detailed strike reports released this week by Airwars is an account of bombings most likely carried out by Russian warplanes in Fayloun, Idlib governorate on January 16th. According to local sources, at least eight children and three women – all members of the al-Saeed family – were killed. The Violations Documentation Center named four of the dead girls as Abeer; Tasneem; Hiba; and Alyaa. Four boys were were also named: Abdulqader; Mohammad; Ahmad; and Abdulrazzaq. The three women were named Seham, Defaf and Hanifah. Footage posted to Youtube shortly afterwards showed rescuers picking up body parts.

Another strike analysed by Airwars occured on January 27th in Al Houla, Homs governorate. According to local sources, six civilians, including a woman, a boy and a girl were killed in Russian strikes. Video posted online by the Homs Media Center showed medics tending to wounded civilians, including children, as relatives cry out in anguish. Suffering like this occurs every day across Syria.

The United Nations stopped tracking deaths in Syria over years ago, when it last presented a figure of 250,000. Monitors have put the toll at double that, and earlier this year the UN’s Special Envoy for Syria Staffan de Mistura told reporters he believed the number of overall deaths stood at 400,000.

Yet at the UN’s Security Council, both Russia and China have blocked attempts to refer the situation in Syria to the International Criminal Court – a step which would allow the court to open a preliminary inquiry. 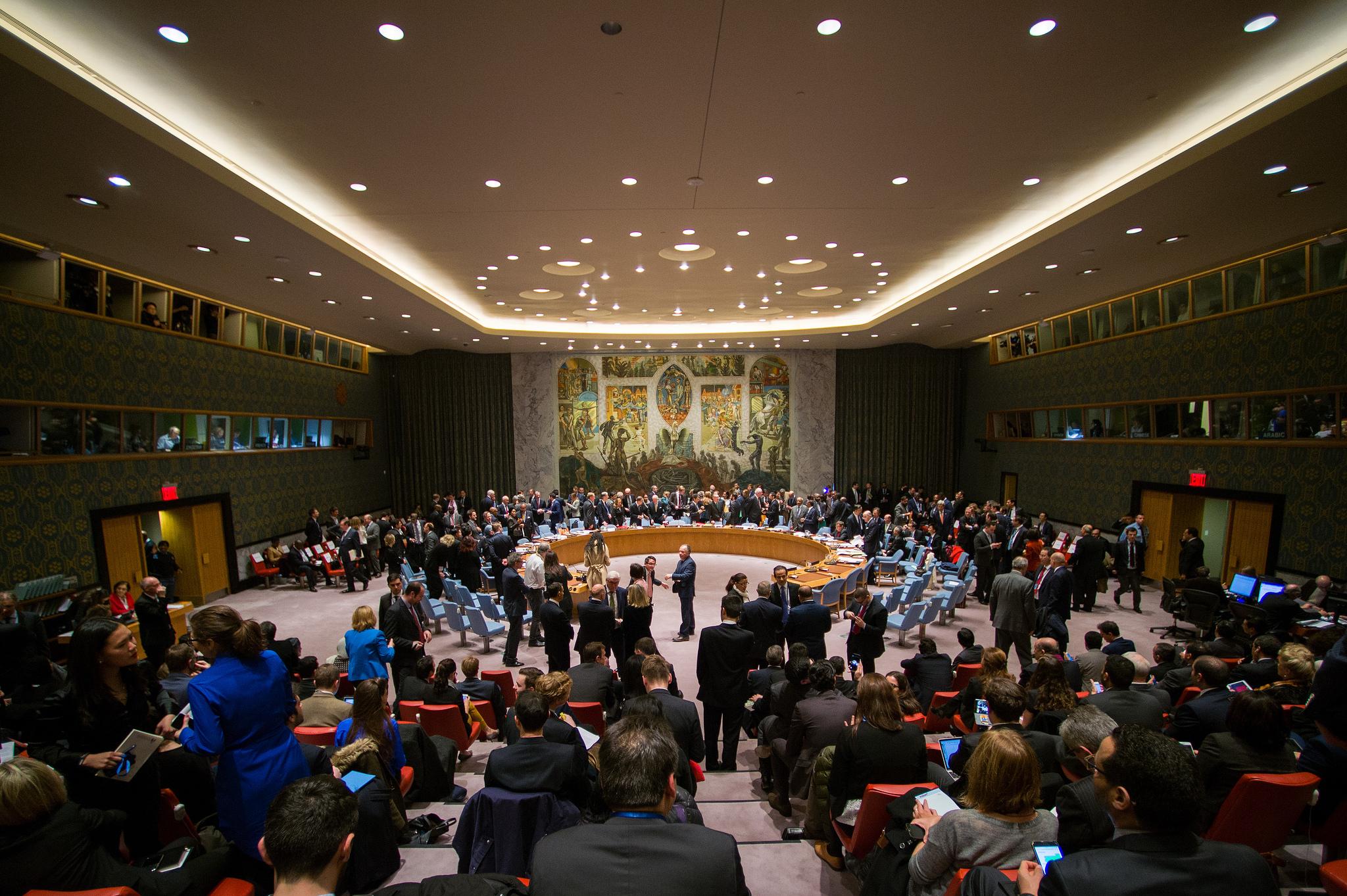 A commission of inquiry established by the UN Human Human Rights Council in 2011 continues its work today, but has not broached the question of civilian casualties from foreign airstrikes in a meaningful way. Following remarks last year by its chairman, there was confusion as to whether the commission even viewed its mandate as encompassing strikes carried out by foreign powers in Syria.

More recently, commission staffers have told Airwars they are now making a greater effort – but remain limited both by a lack of resources and by access issues. Unlike UN efforts to track civilian casualties in countries like Afghanistan or Yemen, the independent Commission of Inquiry is unable to send investigators to bombing sites in Syria. The torrent of civilian and local casualty reporting is often deemed unusable by the Commission, which must abide by strict evidentiary guidelines. In its most recent report dated August 11th 2016, the commission did not even mention that Russian strikes have killed civilians.

Amidst a climate of total impunity in Syria, there is currently no credible official accounting of civilian deaths from the airstrikes of foreign powers in Syria. Neither the UN nor the foreign powers that are bombing Syria – predominantly Russia and the United States – have fulfilled their own obligations in this area.

This continued failure makes local reporting efforts and tracking by monitors indispensable. Without them, the many thousands of civilian victims of foreign airstrikes in Syria could be lost to history.