After more than three months of fighting, Turkish-backed Syrian rebels have captured central al-Bab from so-called Islamic State according to local reports.

Yet civilian deaths from airstrikes, artillery and ground combat in and around the town reportedly stretched into the hundreds, according to the United Nations. Considering al-Bab’s small size, this high toll raises concerns about further Turkish-led actions in northern Syria – where the US has supported Kurdish forces that Turkey now says it will next target.

As the administration of US President Donald Trump weighs whether to revamp American mlitary policy in Syria, and possible lower thresholds for civilian casualties, the threat of prolonged and bloodier confrontations grows.

Following heavy criticism from NATO ally Turkey, since mid-January the US-led Coalition launched nearly 50 strikes in support of Turkish forces fighting to capture al-Bab. The raids represented a distinct third front of Coalition activity after operations at Raqqa and Mosul – and added a volatile element to an already convoluted situation in the town.

By entering the fray, the Coalition also became the third international force bombing al-Bab, in addition to Turkey and Russia. On the ground, Turkish forces and allied opposition units battled ISIL.

Following news of ISIL’s withdrawal from al-Bab on February 23rd, Turkish President Recep Tayyip Erdogan said Ankara’s Euphrates Shield operation would now continue towards Kurdish-held Manbij. That city lies to the east of Al-Bab and was captured in the summer of 2016 by Syrian Democratic Forces (SDF) backed by deadly Coalition air support. The presence of the predominantly Kurdish SDF in Manbij has been a point of tension for Turkey ever since. A January assessment conducted by the Washington Institute predicted that Turkey may apply the same ruthless techniques used in al-Bab at Manbij, “leaving Washington with the prospect of major civilian carnage.”

In late December, after the US initially balked at supporting Turkey’s unilateral move on al-Bab – preferring attention be paid to Raqqa instead – Ankara began cooperating with Russia to coordinate strikes around al-Bab. Whatever the level of cooperation, this was an unprecedented move for a NATO member, and increased pressure on the US to provide its own superior airpower.

The Obama administration had tried to maintain a delicate balance – and forestall an extended confrontation – between its treaty ally Turkey and the Kurdish People’s Protection Units (YPG) that fight under the SDF banner. Turkey accuses the YPG of being the Syrian branch of the Kurdistan Worker’s Party (PKK), a militant group waging a renewed campaign inside Turkey. 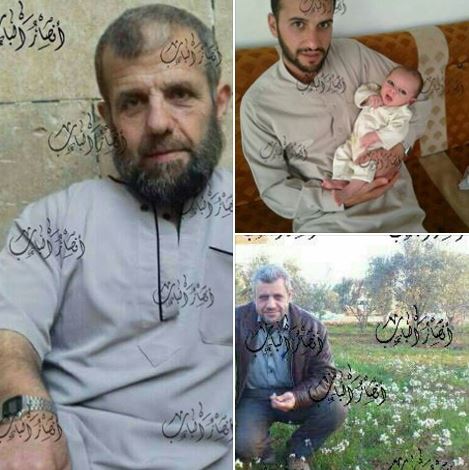 Both Turkey and the US consider the PKK a terrorist organization. The US, however has embedded special operation forces with the SDF, and has relied on the group to capture northern Syrian cities including Manbij. The Coalition has also backed SDF with hundreds of airstrikes in recent months around ISIL’s self-declared capital of Raqqa. In this climate, US CENTCOM told told Airwars as late as January 10th that there had been “no changes to existing US policy regarding support to the Turkish military in al-Bab,” and that American forces were not “conducting US airstrikes in or near Al-Bab.”

That stance changed just one week later, when the Coalition said that it had carried out its first strikes in the area on January 17th – just three days before US President Barack Obama left office.  Since then, the Coalition launched at least 47 raids, according to daily strike reports. Those bombings supported an existing mix of Turkish air and artillery strikes, as well as regular Russian raids and a collage of ground forces – making the tracking and attributing of civilian casualties difficult. While it appears that Turkish airstrikes were primarily focused on the western part of the city – where its forces made slow progress – Coalition and Russian strikes were harder to pinpoint, and neither belligerent provides exact locations for where their weapons are released.

Airwars has monitored dozens of reported civilian casualty incidents in al-Bab since November 2016. Tellingly, reports often conflated Turkish and Coalition actions well before the US-led alliance was officially involved. Through January, the Coalition insisted that Ankara’s offensive was unilateral.

On December 9th, to take one example, reports indicated that at least 13 civilians were killed in al-Bab. Local accounts cited both the Coalition and Turkey, though most blamed Ankara. One local report described how all-Bab “came under aerial bombardment and heavy artillery… [by the] Turkish army,” leaving more than 20 dead from a single family. Three days later, on December 12th, 12 civilians including 6 children were reported killed, and local accounts blamed both Turkey and the Coalition.

Given Turkey’s official membership in the Coalition, it is not always clear if local reports mean to distinguish between the two entities. Since the official start of Coalition strikes in Janaury, that task has become even harder. Extending Euphrates Shield will likely create further contested reporting.

Airwars asked the Coalition how it split targets with Turkey. A spokesperson provided the following statement:

“The Coalition uses a variety of intelligence, reconnaissance, and surveillance to provide accurate information to intelligence centers, strike cells, pilots, and commanders. These information sources provide the Coalition with situational awareness and allow for research and target development on the enemy’s functional use of locations and structures.”

Fadel Abdul Ghany, director of the Syrian Network for Human Rights, says his organisation does attempt to separate Turkish and Coalition attacks based on certain clues.

“We do distinguish between them, and we do not consider them as one side – as if Turkey was a member of the coalition,” Abdul Ghany told Airwars. “It is hard,” he added, “but the international coalition strikes are more precise and more powerful.”

UN: more than 300 civilians slain in battle for al-Bab

The UN’s human rights office (OHCHR) has also been tracking events in al-Bab, and provided Airwars with data from December 2016 through February 17th 2017, just before the town fell. Matthias Behnke, head of OHCHR’s Syria Team said the team “received reports that about 300 civilians have been killed so far as a result of the offensive to retake al-Bab, primarily due to airstrikes but also from improvised explosive devises (IEDs).” The Syrian Observatory for Human Rights put the toll slightly higher, reporting that 353 civilians, including 87 children and 55 women had been killed between November 13th 2016 and February 20th, 2017. It blamed those deaths on Turkish airstrikes and artillery.

Alarmingly, Behnke said that their monitoring suggested that “at least 100 civilians have been killed in and around al-Bab town since February 1st.” A strike on February 8th, he noted, “allegedly killed at least 27 civilians and injured at least 30 others, many of them from the same family.”

According to the daily Coalition strike report for February 8th, “Near Al Bab, three strikes engaged two ISIL tactical units; destroyed two mortar systems, a VBIED, vehicle, and a tunnel entrance.” However, local reports monitored by Airwars blamed Turkey. Al Bab 24, for instance, blamed “Turkish air and artillery shelling” and provided an extensive list of civilians from several families. “The number of victims under the rubble is large and it hasn’t been possible to pull them all out due to heavy shelling,” the report added.

On February 13th – when the Coalition reported no strikes – at least 15 civilians were allegedly killed in al-Bab. The Al Bab Coordination Committee provided the names of 17 people, including 5 women, which it said had perished. Syrian outlet Shaam News cited ISIL news reports which referred to “Turkish aircraft and aircraft of the international coalition” – reflecting the confusion over who exactly is bombing al-Bab. For locals caught up in the violence, there is often little difference.

Worsening the plight of civilians, says the UN, are reports that militants have shot at residents of the city to prevent them from fleeing. “UN Human Rights Office received a number of reports of ISIL fighters shooting civilians trying to leave towards areas controlled by armed opposition groups,” said Behnke. But the UN has also received reports that Turkish-backed rebels have “shot civilians who are mistaken for ISIL elements, and a few reports of Government forces positioned south of al-Bab firing on civilians who are trying to leave towards al Raqqa.”

Given the complicated politics of the al-Bab operation and its high civilian toll from Turkish attacks, it is also unclear the extent to which non-US Coalition members took part in bombings there.  The Coalition would not provide a breakdown of what countries have bombed al-Bab, but the UK told Airwars it carried out one attack during 2017, on January 18th. The UK Ministry of Defense declined to comment on whether it planned to launch any further military actions in the vicinity of al-Bab. While the Coalition’s task is more straightforward in Iraq where it cooperates with the government, the complexities of Syria may make it more difficult for Coalition members to see eye to eye.

The latest civilian casualty incident in al-Bab monitored by the UN took place on February 20th; Behnke said it initially appeared that “tens” of people had been killed. Airwars researchers tracked reports of civilian casualties on this day, when both the Coalition and Turkey reported strikes. The Turkish military said it had bombed or shelled more than 250 targets in al-Bab between February 19th and 21st. The Coalition meanwhile reported that “Near Al Bab, three strikes engaged two ISIS tactical units, destroyed four ISIS-held buildings, and damaged an ISIS-held building.”

If 300 civilians or more were killed in al-Bab since December, it would represent a major toll proportionate to Raqqa and Mosul, where hundreds of thousands more civilians continue to reside, and where the Coalition is now releasing thousands of bombs each month. Al-Bab is much smaller than both cities, and is defended by at most several hundred ISIL fighters – possibly fewer than the number of civilians killed. The Coalition was but one actor in al-Bab – but it was unclear to what extent they are communication with the Turks with an eye to protecting civilians.

Reports in the days before al-Bab’s fall indicate the Trump administration may be willing to lessen support to the SDF, favoring long-term stability with Turkey. According to Aaron Stein, senior fellow at the Atlantic Council, that decision to appease the Turks could prolong the campaign to take Raqqa. Indeed, Turkey has made clear it intends to move not towards Raqqa, but Manbij.

The flash points, however, would be al-Bab, Manbij, and Tabqah. In this scenario,” Stein wrote in a recent assessment of US-Turkish interests in northern Syria. “Washington would have to assume the risk of Kurdish-Turkish escalation in favor of the broader effort to appease Ankara while also ousting the Islamic State from Raqqa with a Turkish-backed force.”

Choosing Turkey over the better-poised SDF could stretch the fight for Raqqa into 2018 – ample time for hundreds more airstrikes.